Alexander Makarov, PhD, is the Director of Research in Life Sciences Mass Spectrometry (MS) for Thermo Scientific and the world-renowned inventor of the Orbitrap mass analyzer technology.

The Orbitrap-based instruments have been integral to the advances seen within the proteomics field over recent years in addition to enabling significant progress in areas such as metabolomics, environmental analysis, molecular screening and toxicology.

Makarov continues to develop and optimize the Orbitrab technologies, striving for the democratization of MS instruments and their increased availability in clinical environments to enhance disease diagnostics.

In addition to being a widely published author and holding over 50 patents, Makarov is the recipient of several prestigious awards for his contribution to the proteomics field, including the Award for Distinguished Contribution in Mass Spectrometry of American Society for Mass Spectrometry (2008).

Molly Campbell: In your opinion, what have been some of the biggest breakthroughs in MS-based proteomics?

Alexander Makarov (AM): Over the last 20 years MS-based proteomics has been on a roller coaster as it evolved from the "biomarker gold rush" to a mainstream laboratory technique for the elucidation of disease pathways and mechanisms.

2019 marks 20-years since I presented the Orbitrap technology at the annual conference of American Society for Mass Spectrometry (ASMS), and it has been a period marked by significant advances in the applications of the technology across a broad range of scientific fields including proteomics, metabolomics, environmental and food safety, all of which play an essential role in making our world healthier, cleaner and safer. It has been a privilege to see how much Orbitrap technology has contributed to the rapid evolution of science!

This contribution was well matched by tremendous progress across all other major stages of proteomic experiment i.e. sample preparation, liquid separation, analytical methodology and data processing. As examples, I would like to mention automated extraction and digestion stations for sample preparation, ultra-high pressure nano- and capillary-flow liquid chromatography for liquid separation, data-independent acquisition and tandem mass tag workflows for analytical methodology, and software suites such as the Thermo Scientific Proteome Discoverer Software for data processing, as well as third party options.

MC: As the inventor of the Orbitrap mass analyzer, which research study utilizing the equipment in the field of proteomics has excited you the most?

AM: In the field of proteomics, I am most excited by research that explores the intricate mechanisms of different diseases, as it is truly detective work to correctly identify the real band of culprits behind human suffering. I am also excited by the applications of proteomics for the analysis of historical objects such as pictures, manuscripts and bones – this research requires equally elaborate and inquisitive intellectual effort and deep knowledge of multiple disciplines.

MC: Increasingly, research laboratories are striving towards single-cell proteomics. How can the family of Orbitrap technologies facilitate this movement?

AM: Orbitrap mass spectrometers are already actively used in pilot studies to advance single-cell proteomics, and I expect that both data-independent acquisition and tandem mass tag workflows will find increasing use in this important and rapidly emerging field of science. There is also significant performance and throughput improvements to come in the future from novel, yet to be implemented, instrument enhancements.

Naturally, progress in MS needs to be matched by advances in adjacent areas of technology such as microfluidics, sorting flow cytometry and liquid separations – most likely with capillary electrophoresis gaining importance in the latter.

AM: As MS developed from a cottage industry of the 1980s and 1990s into a modern industry like aviation in 2000s-2010s, each new development required larger and larger research and development teams to match the increasing complexity of instruments and the skyrocketing importance of software at all levels, from firmware to application. All this extends the cycle time of each innovation and also forces us to concentrate on solutions that address the most pressing needs of the scientific community.

In parallel, the increasing democratization of MS brings with it new requirements for instruments, such as far greater robustness and ease-of-use, which need to be balanced against some aspects of performance.

MC: In a recent talk at the 10th MaxQuant Summer school, you discussed the "death ladder" of MS, in which several orders of magnitude of sensitivity are lost throughout the MS process. What are the reasons for this loss, and can you describe how the Orbitrap technology overcomes this?

AM: The life of an ion in MS is tough and full of discrimination! It all starts with competition for charge during ionization, which continues during space charge-dominated ion transportation from atmosphere to the vacuum, mass selection, fragmentation and then mass analysis. Orbitrap analyzers allow us to reduce losses during the last stage by at least an order of magnitude when compared to other high-resolution techniques. However, each of the remaining stages (except for fragmentation and only when done with gas collisions) still result in orders-of-magnitude lost.

The current frontier of instrument development is focused on reducing losses at the stage of mass selection, with a number of solutions ranging from data-independent acquisition with widened mass filtering window, to linked trapping/ion mobility separation/quadrupole selection/mass analysis operation. However, even modest improvements during preceding stages would give us still another order-of-magnitude improvement when compared to the current best-case scenario.

Read the previous instalment of The Evolution of Proteomics, an interview with Dr Gary Kruppa, here. 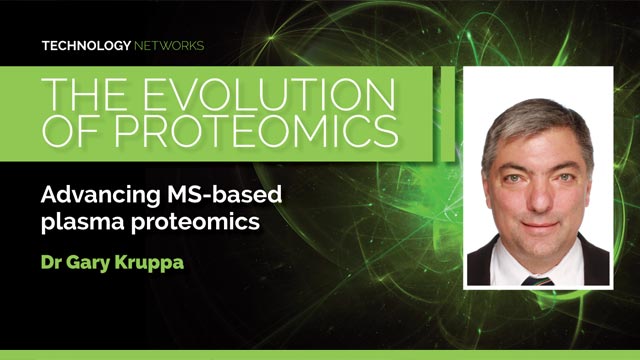 MC: Systems biology relies heavily on MS. As this field of research continues to grow, how can MS technology be further developed to meet the needs of researchers?

AM: I foresee MS to continue its rapid development along two somewhat divergent but also closely linked directions. First, the performance envelope of high-end mass spectrometers will continue to improve, enabling more versatile and deeper analysis of new types of analytes. Second, this progress will be accompanied by the already mentioned democratization of MS, with instruments hopefully becoming as ubiquitous and affordable as liquid chromatographs or even microscopes. Interestingly, the amount of innovation and effort needed to fuel the second trend often appears to be even higher than that required for the first trend!