Neuroscientists today are confronting head-on the feat of teasing apart complex circuitry in both healthy and diseased brains. Fully characterizing how the brain goes awry in disease states such as neuropsychiatric and neurodegenerative disorders depends heavily upon the ability to visualize specific neuron subtypes. Thankfully, molecular neuroscience has been revolutionized by advanced microscopy tools such as confocal laser scanning microscopy, structured illumination microscopy (SIM), direct stochastic optical reconstruction microscopy (dSTORM), and stimulated emission depletion microscopy (STED). In this article, we explore how these exciting techniques are fueling progress in the field.

Fluorescence laser scanning confocal microscopy enables neuroscientists to obtain three-dimensional images of neurons at extremely high resolution. The pinhole of 1 airy unit (1 AU) cuts out background noise, creating an image with a much higher signal-to-noise ratio1. John Miller, laboratory technician at Weill Cornell Medicine, utilizes confocal microscopy every week and explains that “the signal and spatial size of our tissue is so small that resolving it on a normal fluorescence microscope would not look good. Confocal allows us to get micron resolution. The images look cleaner, cells are rounder, and there is less noise.” Miller’s work centers around analyzing anatomical localization of uncharacterized neural circuits involved in addiction and mood disorders. He injects fluorescently tagged neuronal tracers into specific populations of neurons in the amygdala and thalamus, which are trafficked either retrogradely or anterogradely to their respective synaptic partners, and the brain can then be sliced and imaged on the confocal microscope.

In addition, he performs fluorescence in situ hybridization (FISH) on 20-micron brain slices to understand estrogen receptor localization on excitatory neurons that impact excessive alcohol drinking and anxiety. Although estrogen is known to characteristically act as a steroid hormone to influence female sexual development, it surprisingly also acts in the brain of both males and females to rapidly alter the firing of neurons, and as of late, has been implicated in drug-seeking, depression, and anxiety2-4. FISH is advantageous in this case because it allows neuroscientists to understand which neurons estrogen might act on in the brain. The fluorescent probes can label up to three different mRNA transcripts on neurons and the confocal microscope enables visualization of these probes in all cell layers simultaneously. “The confocal microscope gives me good control over the z-plane, which is how deep you are into the tissue, to give you a more 3D structural representation of your fluorescent neurons. The confocal generates publication-quality images and allows us to see different cell types and how cells expressing one receptor might co-localize with another to impact behavior," says Miller. 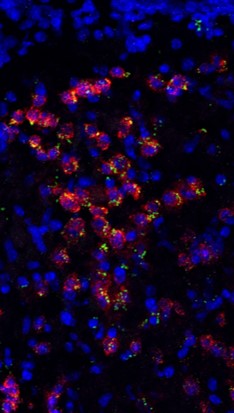 Confocal microscopy can also be used to obtain information about neuronal and cellular activity in live tissue. Amanda Acosta-Ruiz, PhD candidate in biochemistry at Weill Cornell Medicine, utilizes calcium imaging in both live neurons and non-neuronal cells to understand the molecular dynamics of metabotropic glutamate receptor-5 (mGluR5). mGluR5 is part of a large class of receptors that are expressed in multiple brain areas to influence how neurons communicate with one another. “We want to understand how mGluR5 contributes to circuitry and synaptic transmission in the hippocampus to modulate learning and memory formation in diseases such as Autism Spectrum Disorder and Fragile X Syndrome. Since activation of mGluR5 leads to calcium influx into the cell, we can tag it with a fluorescent protein and visualize calcium influx or outflux in both subcellular and extracellular regions.”

While calcium imaging in ex vivo neurons can reveal a lot about signaling pathways, protein dynamics, and cellular mechanisms, neurons ultimately work real-time in networks with millions of other neurons. Two-photon microscopy (2PE) allows neuroscientists to record neuronal activity in vivo in awake and behaving animals. This technique uses two low-energy photons to excite a fluorescent molecule, and as such minimizes photobleaching and phototoxicity, which is particularly important when imaging deep into the brain5. Naomi Xia, PhD candidate in neuroscience at Weill Cornell Medicine, uses 2PE to understand how a certain thought or action plan is held in the brain and how populations of neurons enable this kind of information flow over short periods of time. “The in vivo imaging that I am doing with 2PE microscopy gives me the ability to track individual neurons from specific groups and how their activity contributes to brain function. 2PE is advantageous in this kind of research in combination with recent advances in genetic tools and calcium indicators.”

If unraveling the molecular profiles of individual neurons and their population-level activity is a daunting task, understanding the three-dimensional structure of the thousands of synaptic connections that link these neurons is positively fearsome. To better treat neurological disorders, understanding how synapses are organized, and subsequently become disorganized, is essential. Dr. Joanna Giza, PhD Professor at City University of NY and adjunct faculty at Weill Cornell Medicine, utilized three-dimensional structured illumination microscopy (3D-SIM) to image dendritic spines in the hippocampus of mice with a prevalent polymorphism in the gene coding for the pro-survival protein brain-derived neurotrophic factor (BDNF)6. Carriers of this polymorphism are more susceptible to developing anxiety disorders such as post-traumatic stress disorder and social anxiety disorder, and protraction of dendritic spines in the hippocampus through decreased BDNF signaling is one of the major mechanisms underlying these disorders. 3D-SIM enables the researcher to acquire fast, multicolor and high-resolution images by varying phases and angles of illumination. The components of the image are then computationally deconstructed and recombined to create an image with both lateral and axial dimensions7.

The eye of the STORM

Other types of super-resolution microscopy include stimulated emission depletion microscopy (STED), which overcomes the diffraction barrier by silencing certain fluorophores, and direct stochastic optical reconstruction microscopy (dSTORM), which can image fluorescent samples to nanometer resolution8. Recently, several groups have been using dSTORM to better understand the function and organization of certain receptors at a single synapse.

For example, Kellermayer and colleagues at Université de Bordeaux were interested in how different NMDA receptor subunits dynamically interact at hippocampal synapses to influence neural plasticity, which is a necessary process for learning and memory. NMDA receptors are proteins expressed ubiquitously throughout the brain and are an integral part of the molecular machinery for neurons to communicate effectively and form strong synaptic connections. In order to acquire images of nanoscale resolution, a 642nm laser is used to excite single fluorescently-labeled NMDA receptors, and the intensity is reduced and continuously adjusted to keep an optimal number of activated molecules per frame. Super-resolution images are then reconstructed by generated algorithms. END_OF_DOCUMENT_TOKEN_TO_BE_REPLACED

One of the major findings of this study was that the GluN2A and GluN2B subunits, which are different parts of the NMDA receptor, are spatially reorganized as distinct ‘nanodomains’ throughout development. This is a significant advancement in the field because each subunit has been shown to play a differential role in neural plasticity, sensory processing, and brain development, but their organization at the synapse remained elusive. This was the first study to provide subunit-specific nanoscale information regarding the GluN2A and GluN2B NMDA receptor subunits9.

Microscopy techniques will likely continue to advance in the next several years to minimize photodamage and maximize signal-to-noise ratios, which will allow neuroscientists to uncover even more pressing information regarding the vast intricacies of the brain.

END_OF_DOCUMENT_TOKEN_TO_BE_REPLACED

Could the Environmental Cost of Logging and Agriculture Be Eased by Lab-Grown Plant Material?