Complete the form below and we will email you a PDF version of "The Full Picture, the Right Picture – High-Resolution Mass Spectrometry for Metabolomic Profiling "

Metabolomics is an important discovery tool in numerous research areas, including drug discovery, disease research and crop engineering, as well as in many industrial applications like biomanufacturing. The acquisition of confident measurements depends on accurate metabolite identification and reliable, properly controlled data generation, so an effective methodology is key.

High-throughput, large-scale setups are particularly susceptible to variation. So, workflows must be designed with high accuracy and reproducibility in mind to ensure that changes detected are attributable to biology. Recorded spectra are compared to authentic standards for valid compound identification, and multiple quality checks eliminate variation introduced by sample preparation, operator and instrument.

Although the focused analysis of a targeted set of metabolites is informative and reliable, sometimes a wider scope is needed to explain a phenotype or explore beyond what is known. Comprehensive metabolome coverage – detection of all metabolites in a sample – provides that scope but poses high demands on the instrument and setup. First, discriminating the hundreds of metabolites potentially in a sample requires a MS) system with high resolution power to tease apart compounds of closely related mass. Second, the instrument must acquire data across multiple ionization modes without bias to fully capture the structural diversity of the metabolome. Third, every run must include calibrations and controls to accurately analyze target metabolites as well as facilitate retro-mining data for unknown molecules.

The first two demands are met by modern mass spectrometers that offer exceptional measurement resolution and analytical versatility while the third is met by a well-planned experimental design.

Resolution, range and versatility – the triad of metabolomic insights

High-resolution, accurate-mass (HRAM) MS offers the resolution, range and versatility needed for metabolomic profiling with confident identification, accurate quantitation and robust performance from sample to sample and run to run.

Depending on the model, these mass spectrometers can reach a resolution power of up to 1,000,000. This data granularity boosts confidence in compound identification and is particularly important for metabolites of very similar mass assignments that generate close spectral signals. Here, the high resolution gives narrow peaks that ease metabolite discrimination even at disparate concentrations (Figure 1). HRAM systems also have the dynamic range to measure analyte concentrations spanning over five orders of magnitude with minimal variation. Finally, HRAM systems accommodate multiple separation techniques that comprehensively characterize the diverse physicochemical properties of metabolites. Compatibility with various chromatography options, such as gas and liquid chromatography, and rapid polarity switching are examples of their versatility in expanding spectral coverage. 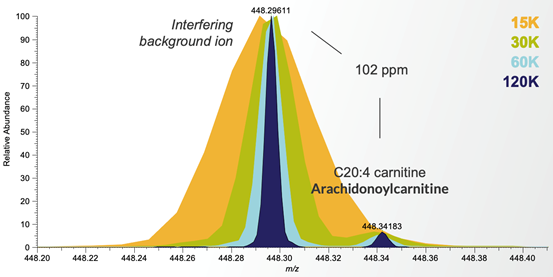 The value of good internal controls

For metabolomic profiling, HRAM workflows incorporate quality checks to ascertain the utility of measurements for both targeted metabolite analysis and the interpretation of untargeted spectra (retro-mining). Internal controls are integral to these checks.

The choice of a control is dictated by the objective of a run. In the case of metabolomic profiling, the internal controls should be a mixture of reference compounds to support identification of target metabolites as well as represent a spectrum of chemical types, molecular weights, concentrations and ion charge. These controls are available commercially as isotope-labeled metabolite mixes – figure 2 illustrates the coverage of a commonly used solution.

Built into a run sequence, internal controls serve two purposes. First, the mix is serially diluted to run as a calibrant to obtain absolute concentration of the sample metabolites. Second, the labelled metabolite mix is spiked into samples at a constant concentration. The retention time, mass accuracy and signal response of each internal standard is then measured throughout the run sequence to assess instrument and method performance.

The latter performance evaluation tests for losses or errors in the analytical workflow, ensuring that the instrument and method produce valid data. Steady retention time of the internal control across injections attests to consistent sample processing through separation and measurement, while reproducible mass accuracy and stable signal response verify instrument reliability. As an additional quality check, a pooled sample consisting of aliquots from all test samples is analyzed intermittently throughout the run sequence (typically every 10–20 injections). This provides a repeatable measurement of the same sample over the entire sequence or study and confirms a stable signal response for endogenous metabolites.

HRAM in action: not all fetal bovine sera are alike

An assessment of biochemical differences among batches of fetal bovine serum (FBS) illustrates the power of metabolomic profiling and the relevance of a good internal control. FBS is commonly used as a supplement in basal cell culture media. However, differences in the constitution of FBS may lead to inconsistent cell culture phenotypes and growth rates. To determine if source and processing methods correlate with biochemical differences among FBS batches, 20 samples sourced from four different vendors in five different countries and treated differently during manufacturing were analyzed. Figure 3 depicts the sequence run, including calibrant, pooled quality control samples, and test samples. 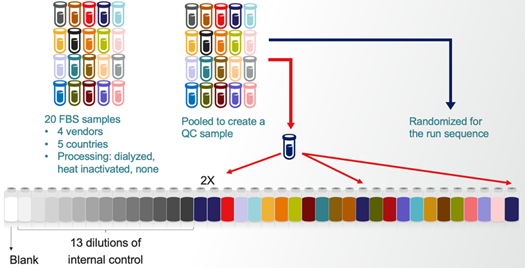 Based on the cross-run and cross-injection analysis of the internal control summarized in figure 4, the method and HRAM system used performed exceedingly well. Controls from all injections and runs showed minimal deviation in retention time (A), mass accuracy (B) and signal response (C). 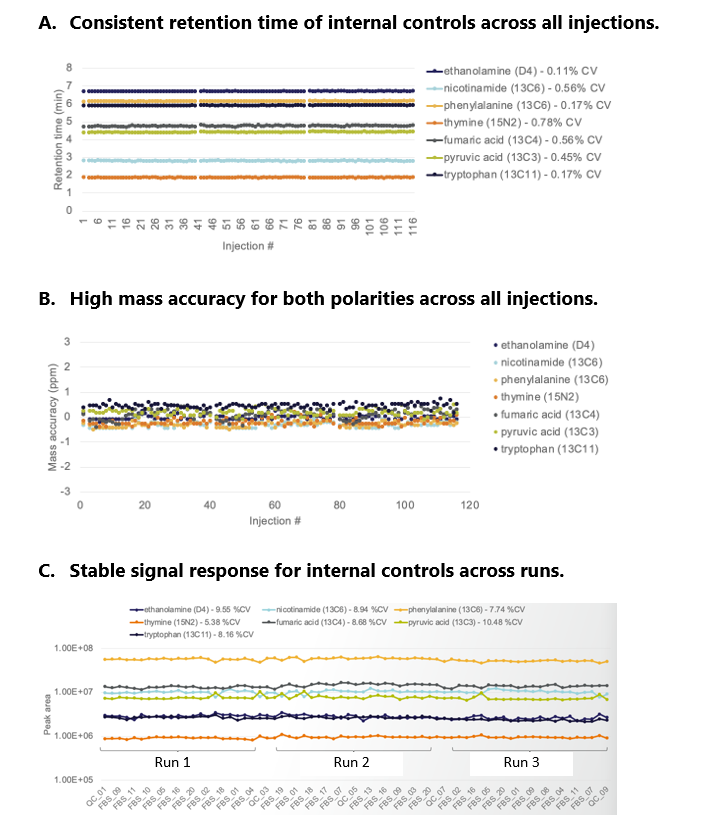 Principal components analysis of the test sample metabolomic profiles clustered FBS batches that were dialyzed during manufacturing completely apart from batches that were heat inactivated or not treated at all (Figure 5A). The profiles also clustered according to country of origin, though these groupings were not as distinct (data not shown).

By retro-mining the acquired data, urea was found to be at lower concentration in dialyzed FBS (Figure 5B). Uridine, also identified retrospectively by matching data to a spectral library, was more concentrated in heat-inactivated FBS from the US, compared to other US-sourced batches (data not shown). 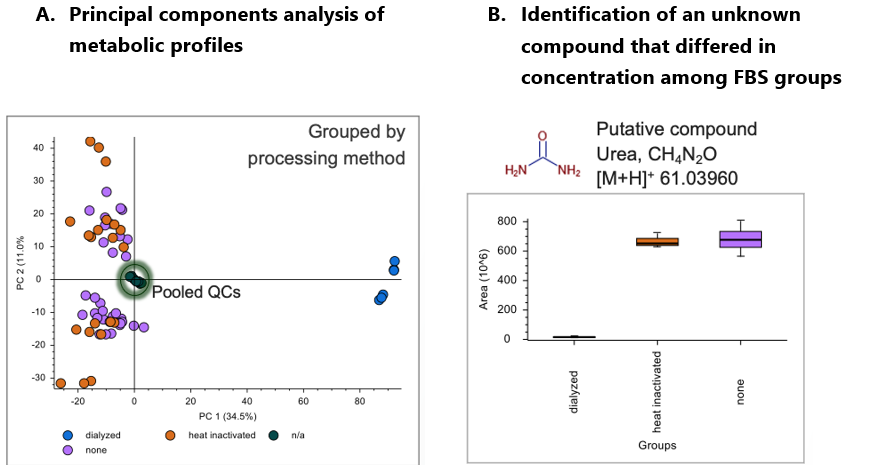 With confident compound identification and reliable quantification, HRAM systems excel at targeted profiling of metabolites and allow data mining to discover novel insights that would otherwise be lost. This two-fold analytical capability unlocks the metabolome to understand biological processes. Known metabolites constitute the first scaffold of biochemical pathways underlying phenotypes, while retro-mining data fills gaps and reveals connections. The key to discoveries from metabolomic analysis is acquiring a complete and accurate picture of the metabolome. With exceptional resolution and flexible data acquisition, HRAM brings this diverse population of molecules into focus.

Complete the form below to unlock access to this Audio Article: "The Full Picture, the Right Picture – High-Resolution Mass Spectrometry for Metabolomic Profiling "