Complete the form below and we will email you a PDF version of "Mirror’s Image: Could a Simple Flip Produce a More Effective Ketamine-Based Antidepressant? "

The antidepressant action of S-ketamine has been one of the most promising success stories from psychedelic drug research. Racemic ketamine, a tranquilizer that causes hallucinations at low-dose, is an equal mix of the two chiral molecules, S-ketamine and R-ketamine. These are mirror reflections of each other, called enantiomers, and are otherwise identical. But while S-ketamine has now become licensed as the antidepressant nasal spray Spravato, research into its mirror molecule has been more limited. 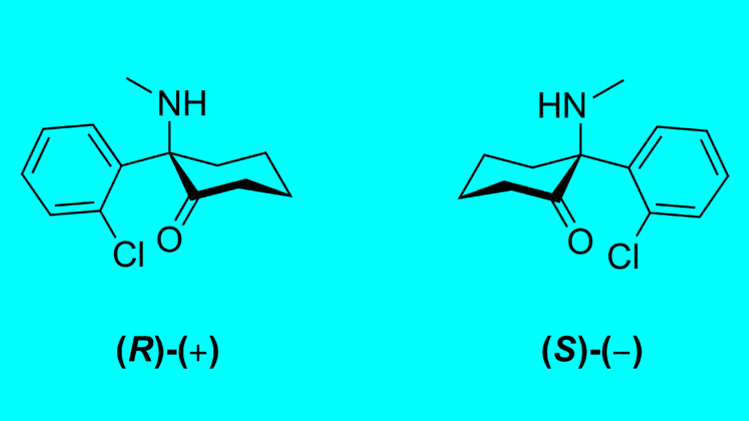 The r- and s-ketamine molecules are enantiomers, chiral molecules that are mirror images of each other.

Now, drug developers say that R-ketamine could potentially deliver a more targeted action with fewer side effects than its more popular twin. To find out more, we spoke to Terence Kelly, president and CEO at Perception Neuroscience, a platform company of atai Life Sciences. Perception has recently announced a collaboration with Otsuka Pharmaceutical Co. to develop R-ketamine-based therapies.

Ruairi Mackenzie (RM): How does R-ketamine differ from S-ketamine on a biological level?

Terence Kelly (TK): Some of this known and some is still unknown.  What is known is that R-ketamine is a weaker antagonist at the NMDA receptor which is clearly tied to some of the psychomimetic side effects and anesthetic properties of rac-ketamine and S-ketamine.  Based on this, we expect that the side effect profile of R-ketamine will be more favorable.  What is not known is how the mechanisms of anti-depressive effects differ, but it appears from published non-clinical studies that there could be differences in how the compounds are working.  Studies in rodents are starting to pinpoint different biological pathways for the R- and S-derivatives and Perception is intending to use some of the recent upfront payment from our licensing deal to support this work.

RM: Why has S-ketamine been the dominant compound tested in clinical trials up until now?

TK: Probably for two reasons:  the first is that the initial hypothesis that the activity at the NMDA receptor was driving the anti-depressive effect.  If you believe this hypothesis, then pursuing the more potent enantiomer would make sense.  The problem is that this mechanism also drives the psychotomimetic side effects.  The second reason is likely because S-ketamine was approved as an anesthetic in Europe.  This meant that there was already a large data set on the drug and a clear regulatory history.

RM: What is the current evidence base around R-ketamine’s antidepressant action?

TK: There is much data based on rodent models of depressive-like behaviors.  In these models, R-ketamine often appears to be more potent, longer lasting and with a potential lower abuse liability.  On the human side, the best evidence, to date, comes from a small, open-label study in depression published by Lucas Quarantini’s group in Brazil in 2020 that may suggest an antidepressant effect in 7 patients with minimum dissociation.

RM: Ketamine-based antidepressants are thought to be able to mediate effects in a far shorter time than traditional SSRIs. Will those effects also be quicker to wear off?

TK: Rapid onset of effect is one of the key benefits that we hope to be able to demonstrate with R-ketamine.  Based on the rodent models that were discussed above, there are good indications that the effect could have a rapid onset and be at least as durable as S-ketamine.  The rapid onset of effect was also supported by the data from 7 patients published by Quarantini. Regarding the durability of R-ketamine and SSRIs, data is required to demonstrate difference, however Perception Neuroscience’s current focus is on progressing PCN-101 (R-ketamine) to a Phase 2 proof-of-concept trial in patients with Treatment Resistant Depression.