On Target: Next-Generation Proteomics Takes the Uncertainty Out of Drug Discovery

On Target: Next-Generation Proteomics Takes the Uncertainty Out of Drug Discovery

Complete the form below and we will email you a PDF version of "On Target: Next-Generation Proteomics Takes the Uncertainty Out of Drug Discovery"

Most promising drug candidates fail at some point during the development journey, often because they do not work as expected.

Although there have been significant efforts to improve the efficiency of this process in recent years, it is still difficult to know exactly how a drug molecule behaves in complex living cells and organisms. Without this information, it can be challenging to predict safety and efficacy further down the pipeline.

Multi-dimensional insights into the effects of drugs on protein structure and function can help de-risk the drug discovery process, building confidence in new drug candidates and their mechanism of action before moving on to the next more costly stage of development.

There are many essential questions about drug candidates that may not be answered during the discovery process.

Does the drug bind to the intended target in the cellular environment? Does it bind to other targets? And does this off-target binding contribute to the mechanism of action, or is it potentially detrimental

Phenotypic screening approaches to drug discovery may identify a candidate with a strong physiological effect, but the precise mechanism of action of the drug remains relatively unknown. This makes it difficult to predict how a drug may behave in patients later on.

On the other hand, rational drug design approaches – increasingly relying on machine learning and artificial intelligence (AI) – can identify compounds that bind with their intended targets and provide intimate details about the probable binding site and likely mechanism of action. 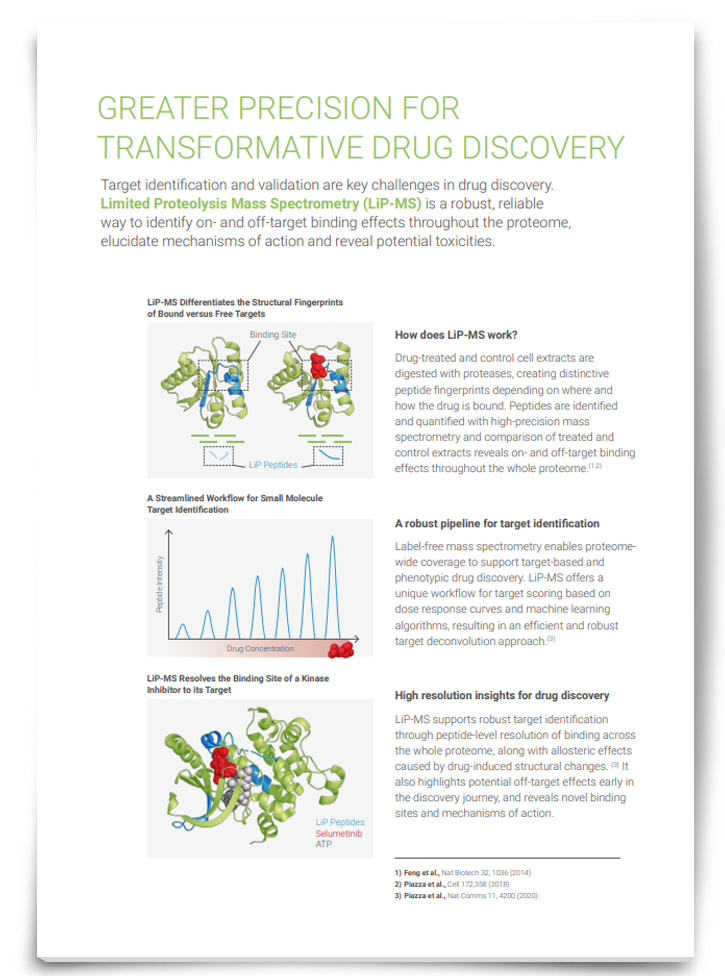 Limited Proteolysis Mass Spectrometry (LiP-MS) is a robust, reliable way to identify on- and off-target binding effects throughout the proteome, elucidate mechanisms of action and reveal potential toxicities. Download this app note to discover the many benfits of LiP-MS drug target deconvolution.

Thorough characterization of lead compounds and their targets is essential for identifying the most likely successful candidates early on in the preclinical process, increasing success rates and reducing the time and costs associated with drug development.

Simple biochemical techniques using purified proteins such as binding assays can help developers understand if their drug molecule interacts with the intended target, but this cannot provide precise information about the binding site. Furthermore, purified protein assays are unable to fully capture the state of proteins in a complex cell lysate, such as post-translational modifications, protein-protein interactions and more.

More detailed characterization requires the use of methods such as X-ray crystallography, cryo-electron microscopy (cryo-EM), or nuclear magnetic resonance (NMR).

However, these techniques are often expensive and complicated, primarily relying on purified proteins removed from the native environment, potentially altering behavior and interactions. Additionally, such methods can’t provide information about whether a drug binds to other proteins in the cell, which could have significant mechanistic or toxicological impacts.

Limited Proteolysis-Mass Spectrometry (LiP-MS) is a unique, patented technology invented at ETH Zurich and co-developed by Biognosys for the unbiased identification of drug target interactions on a proteome-wide scale.

The LiP-MS process starts by digesting drug treated and control cell extracts with broad-spectrum and site-specific proteases. Conformational changes caused by drug binding alter protease accessibility, producing distinctive clusters of peptide fragments depending on where and how the drug is bound.

The peptide fragments are then analyzed by mass spectrometry using data-independent acquisition (DIA) methods to generate unique peptide signatures. Machine learning software then analyzes all this data to provide an unbiased, ranked list of the most likely target sites and affinity estimations across the entire proteome.

Thanks to this unbiased, whole-proteome approach, LiP-MS has the potential to detect on- and off-target binding events, as well as pinpointing the precise regions within proteins where drug compounds bind. Such in-depth analysis reveals not only whether a drug is indeed binding to its intended target but can also uncover insights into the drug’s mechanism of action and potential off-target effects.

Unlike other techniques, LiP-MS does not require any compound modification, reducing the time and resources needed. Furthermore, LiP-MS uses whole cell lysate, removing the need to purify or purchase recombinant proteins and revealing a more accurate picture of what is happening in complex cellular environments.

In a recent study in collaboration with AstraZeneca and ETH Zurich, presented in the cancer proteomics mini-symposium at AACR 2021, Biognosys used LiP-MS to identify the targets of two well-characterized kinase inhibitors: an ATP-competitive CDK9 inhibitor and selumetinib, a non-competitive allosteric inhibitor.

After analyzing more than 120,000 peptides in each experiment, it was discovered that the CDK9 inhibitor showed an affinity for several cyclin-dependent kinases, while selumetinib bound with its direct targets MAP kinase 1 and 2, as expected. The known binding sites of both drugs within each kinase were also successfully identified.

In a further study in collaboration with Cedilla Therapeutics, presented in the lead identification and optimization session at AACR 2021, Biognosys demonstrated that LiP-MS can be used to characterize small molecule-protein interactions with a resolution of 5-10 amino acids.

The researchers were able to identify the binding sites of Ca2+ on calmodulin and known inhibitors on BCL6 and BRD4. These results showed good agreement with HDX-MS, NMR, and X-ray studies, confirming the accuracy of the LiP-MS technique.

LiP-MS provides multi-dimensional insights into protein function and structure that are invaluable to drug discovery. The technology brings a straightforward and rapid way to validate the binding action of candidates, providing valuable data to de-risk the development process and move forward on go/no-go decisions.

Beyond this, LiP-MS has huge future potential for further applications in drug discovery and diagnostics, including the identification of structural biomarkers such as misfolded or aggregated proteins.

More broadly, the ability of LiP-MS to reveal wide-ranging proteome-wide structural and functional information opens the door to true in situ systems biology at the molecular level, as demonstrated recently in proof-of-principle experiments in E. coli.

Although fully understanding the behavior of drug molecules in real-life systems is often highly complex and requires multiple orthogonal techniques, the ability of LiP-MS to provide unbiased proteome-wide structural data makes it an essential part of every drug discovery program.