A Deep Dive Into the SARS-CoV-2 N Protein

A Deep Dive Into the SARS-CoV-2 N Protein

Researchers in the Oregon State University College of Science have taken a key step toward new drugs and vaccines for combating COVID-19 with a deep dive into one protein’s interactions with SARS-CoV-2 genetic material.

The virus’ nucleocapsid protein, or N protein, is a prime target for disease-fighting interventions because of the critical jobs it performs for the novel coronavirus’ infection cycle and because it mutates at a comparatively slow pace. Drugs and vaccines built around the work of the N protein carry the potential to be highly effective and for longer periods of time – i.e., less susceptible to resistance.

Among the SARS-CoV-2 proteins, the N protein is the viral RNA’s biggest partner. The RNA holds the genetic instructions the virus uses to get living cells, such as human cells, to make more of itself, and the N protein binds to the RNA and protects it.

Published in Biophysical Journal, the findings are an important jump-off point for additional studies of the N protein and its interactions with RNA as part of a thorough look at the mechanisms of SARS-CoV-2 infection, transmission and control.

Elisar Barbar, professor of biochemistry and biophysics at Oregon State, and Ph.D. candidate Heather Masson-Forsythe led the study with help from undergraduate students Joaquin Rodriguez and Seth Pinckney. The researchers used a range of biophysical techniques that measure changes in the size and shape of the N protein when bound to a fragment of genomic RNA – 1,000 nucleotides of the 30,000-nucleotide genome.

Biophysical studies of N with large segments of RNA by nuclear magnetic resonance are rare, Barbar said, because of the difficulty of preparing the partially disordered N protein and long RNA segments, both prone to aggregation and degradation, but these kinds of studies are a specialty of the Barbar lab. Other researchers’ studies generally have been limited to much smaller pieces of RNA and smaller pieces of the N protein.

Rather than just looking at the RNA-binding regions of the N protein on their own, the 1,000-nucleotide view allowed scientists to learn that the protein binds much more strongly when it’s a full-length dimer – two copies attached to one another – and to identify regions of the protein that are essential for RNA binding.

“The full protein has structured parts but is actually really flexible, so we know that this flexibility is important for RNA binding,” Masson-Forsythe said. “We also know that as N proteins start to bind to the longer RNA, the result is a diverse collection of bound protein/RNA complexes as opposed to one way of binding.” 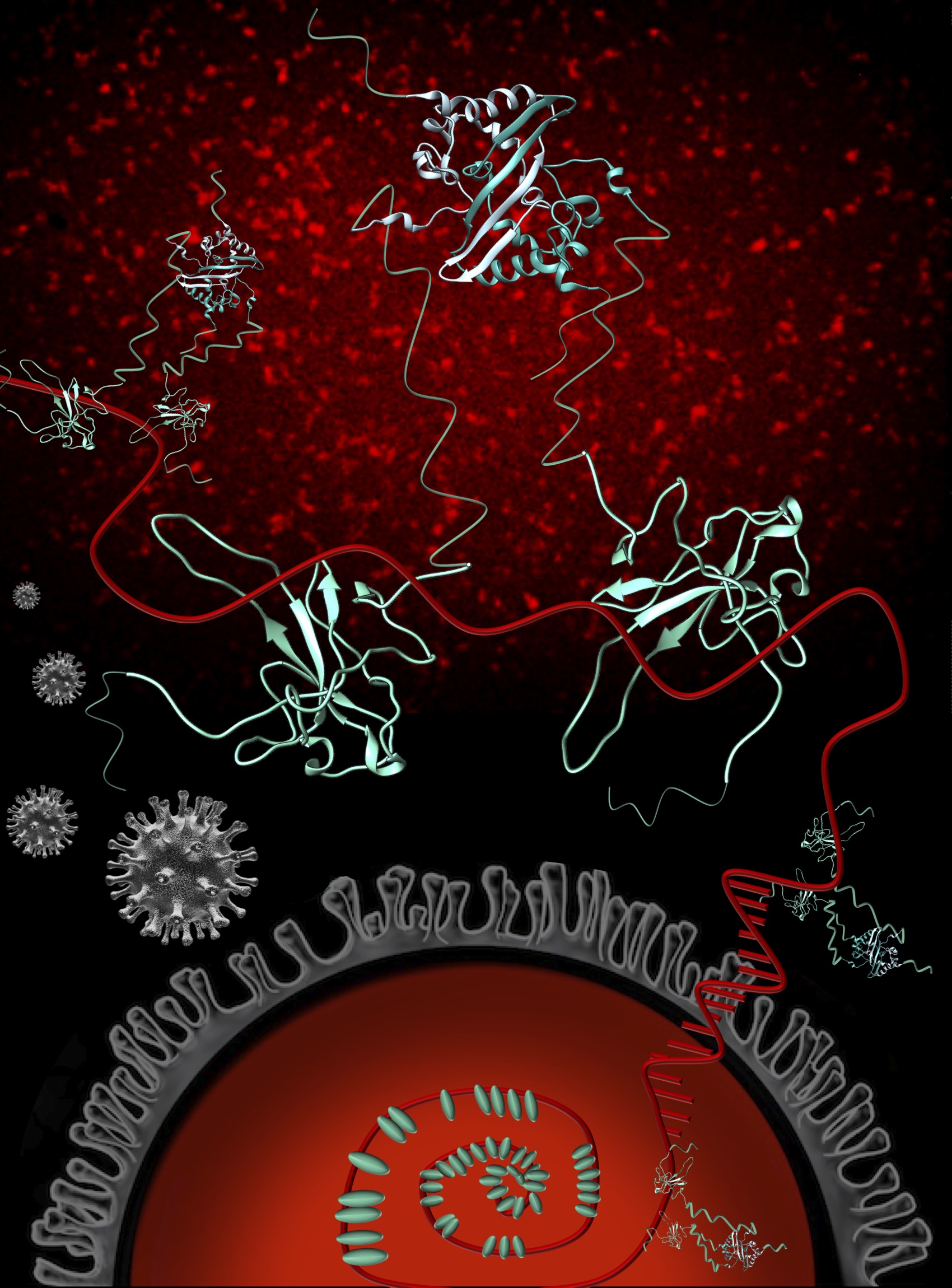 The nucleocapsid phosphoprotein (blue) of SARS-CoV-2 (N) (grey) plays critical roles in multiple processes of the SARS-CoV-2 infection cycle, including replication and transcription, and packaging and protecting the genomic RNA (gRNA) (red). The N protein exists as a dimer in solution and interacts with gRNA predominantly through its structured N-terminal domain. N binds RNA multivalently and as more N proteins become available, stabilizing interactions between RNA and proteins occur, resulting in an organized nucleocapsid. Fluorescence imaging of 1-1000 RNA with a Cy3 fluorescent tag demonstrates that RNA-Cy3 with the addition of FL-N, becomes organized and condensed (red puncta background). Credit: OSU College of Science.

Drugs that thwart the N protein’s flexibility would thus be one potential avenue for pharmaceutical researchers, she said. Another possibility would be drugs that disrupt any of those protein/RNA complexes that prove to be of special significance.

A National Science Foundation Early-concept Grant for Exploratory Research (EAGER) supported this research through the NSF’s Division of Molecular and Cellular Biosciences. The Oregon State nuclear magnetic resonance facility used in the study is funded in part by the National Institutes of Health and the M.J. Murdock Charitable Trust, and the NIH also supported the native mass spectrometry data acquisition portion of the research.