Complete the form below and we will email you a PDF version of "Adhesion Protein Plays Double Agent, Key Role in Cell Migration"

The protein E-Cadherin (E-Cad) is a kind of adhesive that keep cells tightly bound together, thus favouring the organisation of tissues and organs. Scientists at the Institute for Research in Biomedicine (IRB Barcelona) now reveal a new function for E-Cad, one that contrasts with its accepted role in impeding cell movement. The researchers have published an article in which they report that this protein is crucial for the coordinated movement of diverse cell types.

This new function of E-Cad may explain why tumours that express intermediary levels of this protein have a poorer prognosis. 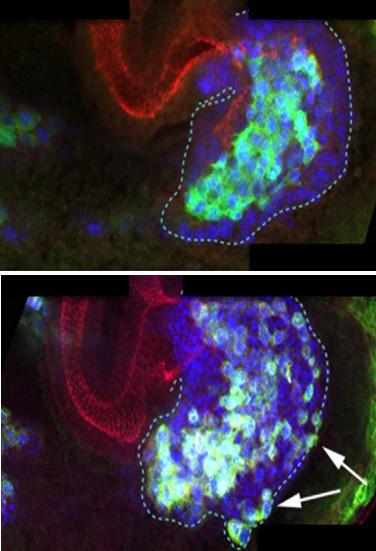 E-Cad facilitates the movement of heterogeneous groups of cells—understanding as heterogeneity cells that exert a range of activities because they have different genes activated: some may divide many times, others trigger certain hormones, while others interact with the membrane, etc...

Thanks to E-Cad, this group of diverse cells moves in a coordinated manner to its destination. Once there, the cells distribute where they are needed; their moderate levels of E-Cad keep them bound but not immobile during this migration. IRB Barcelona researchers Kyra Campbell and Jordi Casanova have addressed this phenomenon in the development of the embryonic digestive system of the fly Drosophila melanogaster, a model that allows them to study cell migration in a growing organism.

"Cell migration is a common and necessary process for an embryo and also for the correct function of the adult organism. What has been most surprising is the observation that E-Cad is a key component in cell movement, when its role was previously assumed to be that of keeping cells static," explains Jordi Casanova, head of the Development and Morphogenesis in Drosophila Lab  at IRB Barcelona and CSIC research professor.

Cell migration is also of great biomedical relevance, and research into this phenomenon sheds light on how, for example, cancer metastasis and other processes such as wound healing and inflammation arise.

According to Casanova, intermediary levels of E-Cad are often associated with aggressive tumours, precisely those which are capable of metastasising. He also reveals that, "the more we learn about metastases, the more evidence emerges that they are formed by groups of cells and not by individual ones".

E-Cad would facilitate highly diverse heterogeneous groups of cells to migrate together from the original tumour. "A cell that migrates alone is much easier to eliminate that a group of cells with different functions," explains the researcher.

"Our results in Drosophila are clinically relevant because they offer an explanation of the role that may be played by E-Cad in tumours with metastasis," says Casanova.

The study has involved the participation of researchers from Advanced Digital Microscopy Core Facility at IRB Barcelona, headed by Julien Colombelli. Sébastien Tosi, Senior Research Officer with this facility, set up the programmes to monitor cells in vivo during their migration.