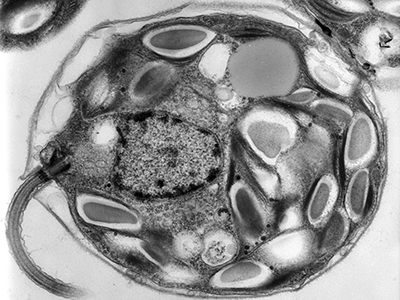 A new way of fixing inactive proteins has been discovered in algae, which uses chloroplast extracts and light to release an interrupting sequence from a protein.

Research specialist Stephen Campbell and Professor David Stern at the Boyce Thompson Institute report the discovery in the July 29 issue of the Journal of Biological Chemistry. This repair system may have applications in agriculture and biotechnology because it could potentially be harnessed to enable proteins to become active only in the light.

Many proteins contain extra sequences, called insertions, which can disrupt their function. The current paper demonstrates that the algae Chlamydomonas reinhardtii has the necessary toolkit to repair proteins by removing these insertions.

Campbell discovered this new repair system while purifying a protein from the chloroplasts of C. reinhardtii that can cut RNA. Upon sequencing the protein, he identified it as RB47, a protein that was not known to have any RNA-cleaving ability. Campbell noticed that the middle of the protein was missing. When he compared the protein sequence to its corresponding gene sequence, the protein was much shorter than expected.

Upon further study, Campbell found that he could detect a long version of the protein that contained an insertion and a short version that didn’t. The cells make both versions when grown in the light or the dark, but only the short version can cleave RNA. The long version of the protein could be converted into the short one by mixing it in a test tube with chloroplasts from cells grown in the light and by illuminating the reaction. This process removed the interrupting insertion and restored the RNA-cutting activity of the protein. It is likely that the chloroplast maintains the machinery necessary to remove the sequence so that it can restore functionality to the protein.

Because the insertion can be placed so that it interrupts a protein’s function, the insertion and repair system may be useful for producing certain pharmaceuticals or protein products, such as cancer drugs, in culture, which would otherwise kill the cell. After purification, the inactive products could be treated with chloroplast factors and light to remove the insertion and activate the proteins.

In future work, the researchers plan to investigate exactly how the insertion becomes spliced out of the protein and which plant factors facilitate its removal. They also aim to understand the purpose of the insertion, and whether the algae can control the splicing to respond to changes in the environment.

Campbell and Stern also want to know how widespread this new type of protein splicing might be.

“If it is happening in plants, is it happening in animals?” said Stern. “We’re pretty sure that this protein is just one example; that we have only found the tip of the iceberg.”