Like most microorganisms, Bacillus subtilis bacteria are single-celled creatures with one goal: to reproduce by making copies of themselves. But survival isn’t always that simple. For example, when food gets scarce, B. subtilis must decide between two possible paths: shut down, form a dormant spore — a process called “sporulation” — and wait for better times or split into two cells and gamble that there is enough food for at least one more generation.

“The decision about whether to form a spore and when is a very important one for B. subtilis,” said Oleg Igoshin, associate professor of bioengineering at Rice and one of the lead researchers on the new study. “If the organism waits too long, it can starve before it finishes transforming into a spore. If it acts too early and forms a spore too soon, it can be overwhelmed and out-reproduced by competitors.” 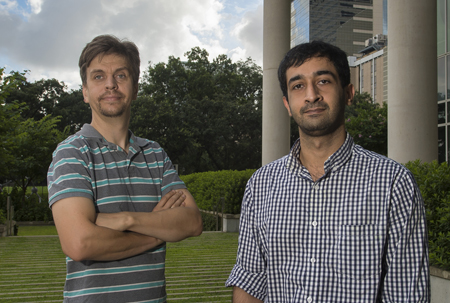 Igoshin’s lab specializes in describing the workings of the complex genetic regulatory networks that cells use to make such decisions. He said dozens of studies over the past 25 years have identified a network of more than 30 genes that B. subtilis uses to bring about sporulation. When food is plentiful, this network is largely silent. But during times of starvation the genes work in concert to form a spore.

B. subtilis is harmless to humans, but some dangerous bacteria like Bacillus anthracis, the organism that causes anthrax, also form spores by a similar mechanism. Scientists are keen to better understand the process, both to protect public health and to explore the evolution of complex genetic processes.

The exact workings of the sporulation network are complex. In 2012, Igoshin and graduate student Jatin Narula analyzed a genetic circuit downstream of the protein known as Spo0A, the “sporulation master regulator,” to explain how the network filters out noisy fluctuations in Spo0A activity. By filtering out noise, cells are able to accurately determine if Spo0A activity is above the threshold that triggers sporulation.

In the new study, Narula, Igoshin and collaborators set out to explain how B. subtilis times its sporulation decision with its cell-division cycle, a programmed series of events that cells normally follow to reproduce.

“Successful sporulation requires two complete copies of the bacterial chromosome, so coordination between the sporulation decision and the completion of DNA replication is very important,” Narula said. “A good analogy might be a semester-long course in biology. Lessons are presented in a particular order, and students are tested after they learn. If the final exam were given in the first week, students would almost certainly fail.”

Igoshin said that when the researchers set out to find how sporulation decisions were timed to the cell cycle, several studies including prior work by team members, provided a significant clue: Under starvation conditions, the activity of the master regulator gene had been shown to spike once per cell cycle.

In investigating how this spike occurred, Narula pored through dozens of published studies and noticed a discrepancy between some experimental results and the widely accepted view of the interactions between two key players in the sporulation network, a protein called Spo0F and a kinase called KinA. To resolve this discrepancy, Narula built a mathematical model in which excess Spo0F inhibits KinA activity. The new model showed that changes in the ratio of KinA to Spo0F could produce the pulse similar to those seen in experiments.

“The inhibition of KinA by 0F results in a ‘negative feedback loop,’ which means the circuit output works to counteract the input that triggers it,” said Narula, co-lead author of the study. “Such loops are common in engineered and biological systems and usually work to keep things relatively constant despite external perturbations.  A simple example of negative feedback would be the thermostat on your house. When temperature drops it will keep your heater on until the temperature is back to normal. If there is a delay in the feedback loop, the system may overreact and produce a surge. With the thermostat, for example, if the heating unit continues to run for some time after the desired temperature is reached, the temperature can transiently spike before settling back to the desired level.”

Igoshin and Narula said similar spikes appear to be a consequence of the delayed negative feedback loop in the network that controls the amount of the active Spo0A. Furthermore, these spikes were timed based upon the positions of the KinA and Spo0F genes on the bacterial genome.

To divide and reproduce, bacteria must make a duplicate copy of their DNA. Because replication of circular bacterial DNA always initiates at one particular point, Narula surmised that the location of the KinA and Spo0F genes could be crucial. If one were located near the point where DNA replication began, the cell would contain two copies of that gene — doubling the rate of production of that protein — throughout the DNA replication period. If the other gene were located on the part of the circle that was copied last, the ratio of KinA to Spo0F would be one-to-one only when DNA replication was nearly completed.

Igoshin and Narula used a mathematical model of the network to show that this type of gene arrangement could account for spikes in Spo0A activity after each round of DNA replication. To verify their idea, they teamed with experimental biologists Anna Kuchina, co-lead author of the study, and Gürol Süel, co-lead investigator, both of the University of California at San Diego.

Experiments showed that the spikes of Spo0A activity always followed completion of DNA replication as the model predicted. In addition, Kuchina and colleagues used biotechnology to engineer mutant forms of B. subtilis in which the two critical genes were located near one another. The Spo0A spike from the delayed negative feedback loop was not observed in the mutants, and they failed to produce spores. In another engineered strain, the feedback loop between Spo0A and Spo0F was eliminated. This led to a gradual increase in Spo0A activity as opposed to a spike, and such cells were several times more likely to fail or die during sporulation.

“We found that the relative location of sporulation genes on the DNA circle were similar in more than 30 species of spore-forming bacteria, including Bacillus anthracis,” Igoshin said. “This evidence suggests that the DNA timing mechanism is highly conserved, and it is possible that other time-critical functions related to the cell cycle may be regulated in a similar way.”