Complete the form below and we will email you a PDF version of "Beating the clock: new treatment for rabies developed"

Successfully treating rabies can be a race against the clock. Those who suffer a bite from a rabid animal have a brief window of time to seek medical help before the virus takes root in the central nervous system, at which point the disease is almost invariably fatal.

Now, researchers at the University of Georgia (UGA) have successfully tested a new treatment on mice that cures the disease even after the virus has spread to the brain. They published their findings recently in the Journal of Virology.

"Basically, the best way to deal with rabies right now is simple: Don't get rabies," said study co-author Biao He, a professor of infectious diseases in the UGA College of Veterinary Medicine. "We have vaccines that can prevent the disease, and we use the same vaccine as a kind of treatment after a bite, but it only works if the virus hasn't progressed too far. 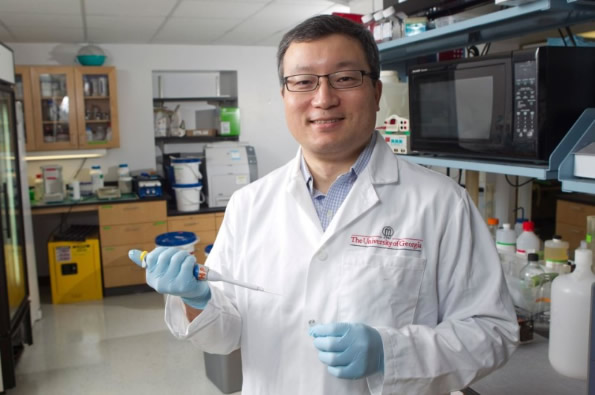 "Our team has developed a new vaccine that rescues mice much longer after infection than what was traditionally thought possible."

In their mouse experiments, the animals were exposed to a strain of the rabies virus that generally reaches the brain of infected mice within three days. By day six, mice begin to exhibit the telltale physical symptoms that indicate the infection has become fatal.

However, 50 percent of mice treated with the new vaccine were saved, even after the onset of physical symptoms on day six.

"This is the most effective treatment we have seen reported in the scientific literature," He said. "If we can improve these results and translate them to humans, we may have found one of the first useful treatments for advanced rabies infection."

He and his colleagues developed their vaccine by inserting a protein from the rabies virus into another virus known as parainfluenza virus 5, or PIV5, which is thought to contribute to upper respiratory infections in dogs but is completely harmless to humans.

PIV5 acts as a delivery vehicle that carries the rabies protein to the immune system so it may create the antibodies necessary to fight off the virus.

"This is only the beginning of our work," He said. "While these preliminary results are very exciting, we are confident that we can combine this new vaccine with other therapies to boost survival rates even higher and rescue animals even when symptoms are severe."

Apart from being very effective in saving the infected mice, the researchers emphasized that their vaccine is much safer when compared to the best current treatment in mice, which uses a weakened version of the rabies virus.

"It doesn't matter how we weaken the current vaccine, the virus inside it is still rabies," said study co-author Zhen Fu, a professor of pathology in the college. "That is not a concern with our PIV5 vaccine."

The researchers will continue to perfect their vaccine's design and hope to move into more advanced animal trials soon.

"There is an urgent need in many parts of the world for a better rabies treatment, and we think this technology may serve as an excellent platform," He said. "Ultimately, we just want to try to save more lives."

The University of Georgia   Original reporting by: James Hataway