Fibrous protein clumps known as amyloids are most often associated with diseases such as Alzheimer’s disease, where they form characteristic plaques in the brain.

Scientists first described amyloids about 150 years ago; they have since been tagged as key players in Parkinson’s disease, Huntington’s disease, and rheumatoid arthritis, as well as Alzheimer’s. However, recent findings suggest that this class of proteins may also have critical biological functions in healthy cells.

MIT biologists have discovered that yeast cells need to build amyloid-like structures during the production of reproductive cells called spores. Learning more about how yeast build and then break down these protein structures could help scientists develop drugs that destroy disease-causing amyloids, the researchers say. 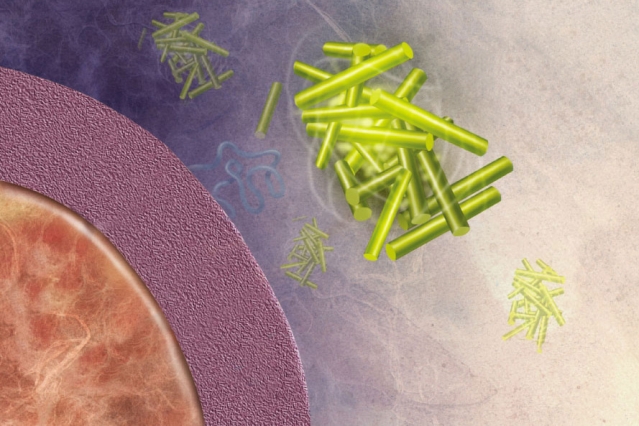 “Amyloids in the brain persist for decades. We just can’t get rid of them, yet yeast cells seem to have a mechanism for getting rid of them in 15 minutes,” says Luke Berchowitz, a postdoc at MIT’s Koch Institute for Integrative Cancer Research and the paper’s lead author. “If we can harness that mechanism, and really understand it, that could lead to anti-amyloid therapeutic opportunities.”

Berchowitz and Amon had previously discovered that Rim4 latches onto messenger RNA (mRNA) molecules, which carry genetic information to the cell’s protein-building machinery. In the new Cell paper, the researchers found that Rim4 uses amyloid-like clusters to prevent these mRNA molecules from being transcribed into proteins.

This process regulates the formation of spores — reproductive cells that are analogous to eggs and sperm, the researchers found.

Yeast usually reproduce asexually, through a process called budding, but under certain high-stress conditions, they can also undergo sexual reproduction through creation of spores that fuse to form new cells. The MIT team found that as yeast cells near completion of sexual reproduction, Rim4 amyloid-like clusters are broken down, releasing mRNA required for the cells to complete meiosis — the specialized type of cell division that produces spores.

“None of us anticipated that the way Rim4 actually works is by formation of these aggregates,” says Scott Keeney, a member of the Memorial Sloan Kettering Cancer Center, who was not involved in the research. “We’re used to thinking of these as toxic aggregates, so to demonstrate that they actually have a useful function in cells is intriguing.”

The researchers also found preliminary data suggesting that an amyloid protein known as DAZL plays the same role in sperm formation in mice; they believe that similar proteins are probably found in every organism that reproduces sexually, including humans.

Berchowitz says it is still unclear why cells rely on amyloid-forming proteins for this type of regulation, but one advantage amyloids offer is their ability to withstand the harsh environments in which sexual reproduction cells are formed. “Amyloids are stable and they’re able to sequester things,” he says. “They’re very tough guardians.”

Previously, scientists have found a few other examples of amyloid-forming proteins that have critical roles in normal cell functions: In fruit flies, persistence of memory can rely on formation of amyloid-like structures in the brain, and amyloids are also involved in the formation of the skin pigment melanin in humans.

Learning more about how cells break down those amyloids could help scientists develop new drugs for disease such as Alzheimer’s, Parkinson’s, Huntington’s, and rheumatoid arthritis. Berchowitz is now working on figuring out how yeast cells regulate the breakdown of Rim4 aggregates.

“It’s a great opportunity to study assembly, regulation, and function of amyloids in living cells,” he says. “It’s pretty exciting that we can form them rapidly, synchronously, and abundantly.”

END_OF_DOCUMENT_TOKEN_TO_BE_REPLACED

Researchers from the University of Nebraska Medical Center (UNMC) and the Department of Energy’s (DOE’s) Oak Ridge National Laboratory (ORNL) have now observed the complete atomic structure of an enzyme called manganese superoxide dismutaseMnSOD, including its proton arrangements, with neutron scattering.