Complete the form below and we will email you a PDF version of "Brain Equation: Subtract Protein, Generate Myelin-Making Cells"

That’s the conclusion of University at Buffalo scientists after deleting from the adult brain a protein necessary for early development. They found that this deletion actually fosters the growth of cells that generate myelin, the important protective coating neurons need to function.

The research on lab animals provides new insight into how critical brain cells are generated. The finding may lead to improved treatments for brain injury, demyelinating diseases, certain developmental diseases and brain tumors.

The UB researchers studied Nuclear Factor I X (NFIX), a transcription factor – a protein that turns genes on and off.

NFIX is required for normal development of the early brain and it’s known that losing NFIX before birth results in a number of rare human diseases, characterized by severe developmental and physiological defects. 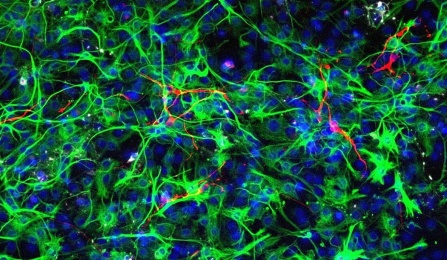 However, the new study shows that the loss of NFIX is necessary at a certain point in order for some brain cells to develop normally.

“This paper is about the increase in oligodendrocytes, the myelin-making cells, that we discovered when we deleted NFIX from adult neural stem cells,” explained lead author Richard M. Gronostajski, PhD, professor in the UB Department of Biochemistry. “This is of interest because producing more oligodendrocytes could help prevent the damage to neurons that occurs in MS and other demyelinating diseases, such as Krabbe’s Disease.”

He directs the Genetics, Genomics and Bioinformatics Graduate program in the UB School of Medicine and Biomedical Sciences and UB’s Western New York Stem Cell Culture and Analysis Center (WNYSTEM).

Gronostajski’s lab is at UB’s New York State Center of Excellence in Bioinformatics and Life Sciences and he is also a professor at Roswell Park Cancer Institute.

Thirty years ago, while working in a lab at Albert Einstein College of Medicine, he contributed to the discovery of NFI proteins. His new research demonstrates how complex a role NFIX and other related transcription factors play in development.

He explained that oligodendrocytes surround neurons, which transmit electrical signals in the brain, protecting them from damage and speeding the transmission of those signals.

The research shows that as neural stem cells differentiate into oligodendrocytes, the expression of NFIX decreases, apparently an essential step in the normal formation of the myelin-making cells.

“In terms of a treatment, this could lead to the development of a small molecule that could be used to shut off NFIX activity in MS patients, thus promoting the growth of more oligodendrocytes,” explained Gronostajski.

This study and previous ones have found that loss of NFIX could also increase the growth of adult neural stem cells, which, in turn, generate new neurons in adult animals.

“This could also help us find ways to stimulate new neuron production in diseases where neurons die, such as in Alzheimer’s and Parkinson’s diseases and in spinal cord injury,” he said.

The researchers’ next step is to learn which genes are regulated by NFIX, and the best way to promote this increase in both oligodendrocytes and neural stem cells.