The feeling of being inside one's own body is not as self-evident as one might think. In a new study from Sweden's Karolinska Institutet, neuroscientists created an out-of-body illusion in participants placed inside a brain scanner. They then used the illusion to perceptually 'teleport' the participants to different locations in a room and show that the perceived location of the bodily self can be decoded from activity patterns in specific brain regions.

The sense of owning one's body and being located somewhere in space is so fundamental that we usually take it for granted. To the brain, however, this is an enormously complex task that requires continuous integration of information from our different senses in order to maintain an accurate sense of where the body is located with respect to the external world. Studies in rats have shown that specific regions of the brain contain GPS-like 'place cells' that signal the rat's position in the room -- a discovery that was awarded the 2014 Nobel Prize in Physiology or Medicine. To date, however, it remains unknown how the human brain shapes our perceptual experience of being a body somewhere in space, and whether the regions that have been identified in rats are involved in this process.

"In a matter of seconds, the brain merges the sensation of touch and visual input from the new perspective, resulting in the illusion of owning the stranger's body and being located in that body's position in the room, outside the participant's physical body," says Arvid Guterstam, lead author of the present study.

In the most important part of the study, the scientists used the out-of-body illusion to perceptually 'teleport' the participants between different places in the scanner room. They then employed pattern recognition techniques to analyze the brain activity and show that the perceived self-location can be decoded from activity patterns in specific areas in the temporal and parietal lobes. Furthermore, the scientists could demonstrate a systematic relationship between the information content in these patterns and the participants' perceived vividness of the illusion of being located in a specific out-of-body position.

"The sense of being a body located somewhere in space is essential for our interactions with the outside world and constitutes a fundamental aspect of human self-consciousness," says Arvid Guterstam. "Our results are important because they represent the first characterization of the brain areas that are involved in shaping the perceptual experience of the bodily self in space." 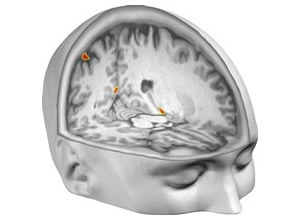 Brain regions in which the scientists could successfully decode the participants’ perceived self-location from patterns of neural activity. Credit: Malin Björnsdotter, Arvid Guterstam

One of the brain regions from which the participants' perceived self-location could be decoded was the hippocampus -- the structure in which the Nobel Prize awarded 'place cells' have been identified.

"This finding is particularly interesting because it indicates that place cells are not only involved in navigation and memory encoding, but are also important for generating the conscious experience of one's body in space," says principal investigator Henrik Ehrsson, professor at the Department of Neuroscience.