Researchers at University of California, San Diego School of Medicine and Skaggs School of Pharmacy and Pharmaceutical Sciences have found that the breast cancer drug tamoxifen gives white blood cells a boost, better enabling them to respond to, ensnare and kill bacteria in laboratory experiments. Tamoxifen treatment in mice also enhances clearance of the antibiotic-resistant bacterial pathogen MRSA and reduces mortality.

“The threat of multidrug-resistant bacterial pathogens is growing, yet the pipeline of new antibiotics is drying up. We need to open the medicine cabinet and take a closer look at the potential infection-fighting properties of other drugs that we already know are safe for patients,” said senior author Victor Nizet, MD, professor of pediatrics and pharmacy. “Through this approach, we discovered that tamoxifen has pharmacological properties that could aid the immune system in cases where a patient is immunocompromised or where traditional antibiotics have otherwise failed.” 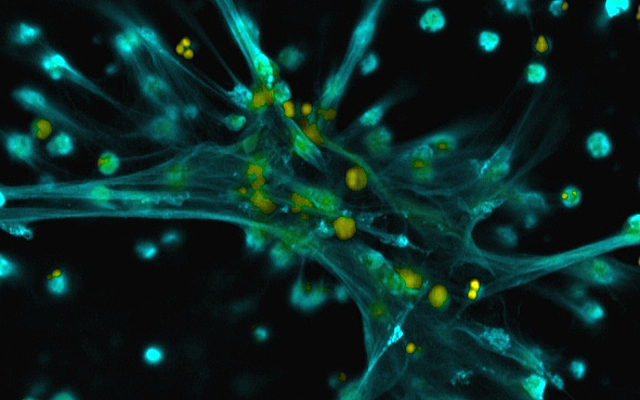 Tamoxifen targets the estrogen receptor, making it particularly effective against breast cancers that display the molecule abundantly. But some evidence suggests that tamoxifen has other cellular effects that contribute to its effectiveness, too. For example, tamoxifen influences the way cells produce fatty molecules, known as sphingolipids, independent of the estrogen receptor. Sphingolipids, and especially one in particular, ceramide, play a role in regulating the activities of white blood cells known as neutrophils.

“Tamoxifen’s effect on ceramides led us to wonder if, when it is administered in patients, the drug would also affect neutrophil behavior,” said first author Ross Corriden, PhD, project scientist in the UC San Diego School of Medicine Department of Pharmacology.

The team also tested Tamoxifen’s immune-boosting effect in a mouse model. One hour after treatment with tamoxifen or a control, the researchers infected mice with MRSA (methicillin-resistant Staphylococcus aureus), a “superbug” of great concern to human health. They treated the mice again with tamoxifen or the control one and eight hours after infection and monitored them for five days.

There are two caveats, the researchers said. First, while tamoxifen was effective against MRSA in this study, the outcome may vary with other pathogens. That’s because several bacterial species have evolved methods for evading NET capture. Second, in the absence of infection, too many NETs could be harmful. Some studies have linked excessive NET production to inflammatory disease, such as vasculitis and bronchial asthma.

“While known for its efficacy against breast cancer cells, many other cell types are also exposed to tamoxifen. The ‘off-target effects’ we identified in this study could have critical clinical implications given the large number of patients who take tamoxifen, often every day for years,” Nizet said.

Tamoxifen is taken daily by hundreds of thousands of patients worldwide for the treatment of estrogen receptor-positive breast cancer. The World Health Organization considers tamoxifen an “essential medicine,” due to its cost-effectiveness and safety profile. According to the breast cancer organization Susan G. Komen, generic tamoxifen cost patients about $100 per month in 2010.