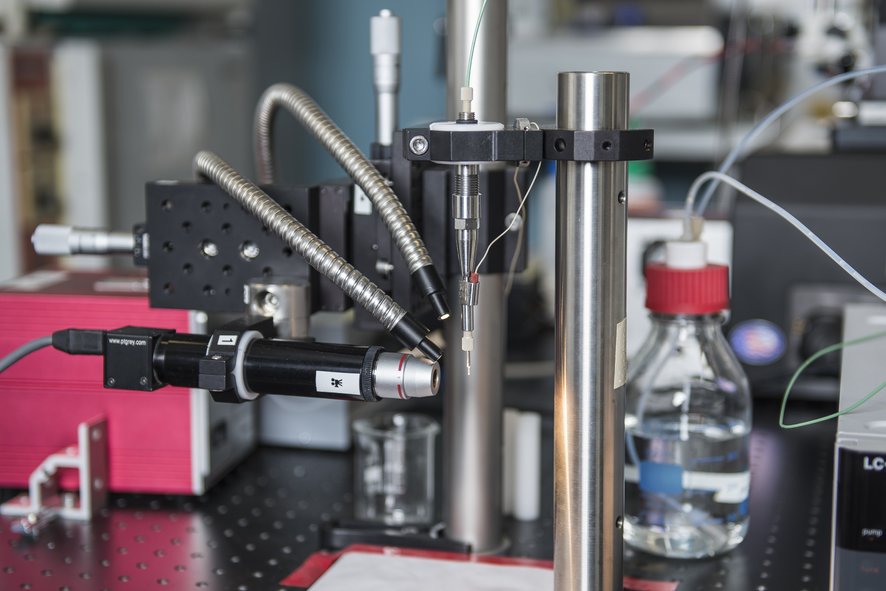 Some of the fastest processes in our body run their course in proteins activated by light. The protein rhodopsin sees to it that our eyes can rapidly take in their ever-changing surroundings. Free-electron X-ray lasers such as SwissFEL at the Paul Scherrer Institute PSI now makes it possible for the first time to catch such processes in flagranti. Free-electron X-ray lasers generate extremely short and intense pulses of X-ray light. Currently there are only two such facilities in operation, worldwide. An international team under the leadership of the PSI has now successfully shown how the ultrafast processes by which proteins do their work can be studied with free-electron X-ray lasers. As a model organism, they used a simple microbe that can convert light into chemical energy. The researchers report their results in the scientific journal Nature Communications.

Sitting in a sidewalk cafe, watching people stroll by: Most of us are unaware that complex processes are constantly taking place in our body to make seemingly simple perceptions such as sight possible in the first place. There’s a reason why, nevertheless, vision appears to be an immediate experience that belongs to us directly: The processes involved take place so rapidly that we simply don’t notice them. We do notice the blink of an eye, but biological processes can be up to a billion times faster, particularly if light is involved.

Testing methods on a simple model

Researchers around the world use the protein bacteriorhodopsin to investigate such ultrafast processes. It has a key function in certain simple microbes, above all those in the group of halobacteria. If these smallest of living things run short on oxygen, they use light instead as an energy supply. Bacteriorhodopsin is a membrane protein — that is, it sits in the outer skin of the cell. When light strikes it, the protein changes form and starts the process of converting light to chemical energy.

For researchers, this is an important model protein, on which they can test methods that can later be used on more complex membrane proteins — such as bacteriorhodopsin’s big brother rhodopsin, which sees to it that our eyes can rapidly take in their ever-changing surroundings.

Researchers have been trying for a long time to understand in detail the ultrafast processes that take place in proteins day in and day out. This now becomes possible for the first time, with free-electron X-ray lasers such as SwissFEL, which is currently being completed at the Paul Scherrer Institute PSI: These facilities generate a rapid sequence of extremely short and intense pulses of X-ray light, with which the individual steps of ultrafast processes can be illuminated to be rendered and viewed, so to speak, as a molecular movie.

To be able to optimally exploit the potential of free-electron X-ray lasers, PSI researchers are developing new experimental methods. The most promising method to date is called serial crystallography. It was specially developed for free-electron X-ray laser applications but can also be used at facilities such as the Swiss Light Source SLS of the PSI to investigate the structure of biomolecules.

In theory the idea of how, with serial crystallography, it is possible to study light-activated proteins such as bacteriorhodopsin in action is simple. Many identical samples are made, an optical laser triggers the desired process in the samples at precisely controlled time intervals, and the samples are injected individually into the beam of X-ray laser pulses. The pulses then X-ray the individual samples. Because the state of the protein at a specific process step can be inferred from the deflected light, the individual steps are captured, image by image. These can then be assembled into a movie.

The devil’s in the details — of the research object

As self-evident as the theory may be, in practice the researchers have to contend with the uncooperative nature of their research objects. In order for the X-ray light to be deflected with sufficient strength, the sample must be prepared in crystal form. And up to now, the ability to resolve ultrafast processes required a large number of such protein crystals. Their production, however, is very time-consuming and cost-intensive — especially for the important group of membrane proteins to which the previously mentioned light sensor rhodopsin belongs.

At the free-electron laser facility LCLS at Stanford University in California, an international team under the leadership of the PSI has now shown how even these difficult proteins can be made accessible for study. Our goal was to drastically reduce the number of crystals required, says Przemyslaw Nogly, who played a leading role in the project within the framework of the Swiss-European PSI FELLOW Program.

The researchers injected bacteriorhodopsin crystals into the X-ray beam with a special injector. In this injector the crystals, just a few micrometres in size, are embedded in an extremely viscous fluid. It is in fact so viscous that the injector admits less than two microlitres per minute into the X-ray beam — that is, less than two-millionths of a litre. In this way we were able to decisively increase the hit rate of the X-ray pulses, and we lose fewer crystals than with other methods, beams Nogly. Previous methods needed several grams of the precious protein crystals, but now just a few milligrams are enough.

That experiments with this method can be conducted at room temperature is another crucial advantage. It’s hard to produce a good movie when the actors are frozen in their tracks, jokes Standfuss, under whose leadership the experiment at Stanford was conducted.

The researchers took the injector used in their experiment with them to Stanford. In this way they were able to gain valuable experience, because this injector is destined for use at SwissFEL, where the first pilot experiments will start in 2017. It’s important for us to be able to test the methods planned for SwissFEL in advance on existing X-ray lasers, says Christopher Milne. For SwissFEL, he is developing the experiment station at which serial crystallography will be deployed once the facility is in operation. He also took part in the Stanford experiment. This lets us optimise the experiment stations from the start to be compatible with state-of-the-art methods.

The same goes for the biologists. They want to begin their studies at SwissFEL with the best possible research tools. And they can hardly wait to see, in addition to their model protein, other proteins in action. With free-electron X-ray lasers such as SwissFEL, we will finally be able to follow some of the fastest biological process in the finest detail, Standfuss says.