Two labs in China have independently succeeded in transforming skin cells into neurons using only a cocktail of chemicals, with one group using human cells from healthy individuals and Alzheimer's patients, and the other group using cells from mice. The two studies reinforce the idea that a purely chemical approach is a promising way to scale up cell reprogramming research that may avoid the technical challenges and safety concerns associated with the more popular method of using transcription factors. Both papers appear in the journal Cell Stem Cell.

One of the challenges of forcing cells to change identity is that the cells you end up with may look normal but have different internal activities than their naturally forming counterparts. The two papers provide evidence that similar gene expression, action potentials, and synapse formation can be detected in transcription-factor-induced neurons as those generated from the chemical cocktails. (Both groups used mixtures of seven small molecules, but different recipes--outlined in detail in the supplemental information section of each paper--because they focused on different species).

"We found that the conversion process induced by our chemical strategy is accompanied by the down-regulation of [skin-cell] specific genes and the increased expression of neuronal transcription factors," said human study co-author Jian Zhao, of the Shanghai Institutes for Biological Sciences and Tongji University. "By coordinating multiple signaling pathways, these small molecules modulate neuronal transcription factor gene expression and thereby promote the neuronal cell transition." The authors add that the direct conversion bypasses a proliferative intermediate progenitor stage, which circumvents safety issues posed by other reprogramming methods. 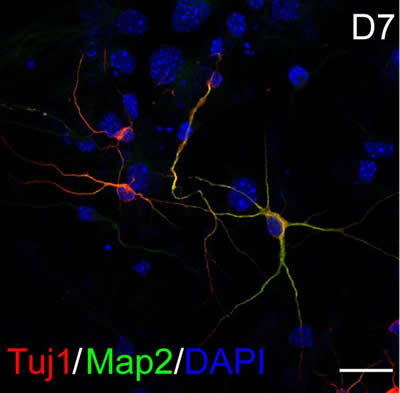 Zhao's paper, co-led with cell biologist Gang Pei, also shows that the pure chemical protocol can be used to make neurons from the skins cells of Alzheimer's patients. Most of the work using patient stem cells has been done by using transcription factors--molecules that affect which genes are expressed in a cell--to create induced pluripotent stem cells. Chemical cell reprogramming is seen as an alternative for disease modeling or even potential cell replacement therapy of neurological disorders, but the "proof-of-concept" is still emerging.

"In comparison with using transgenic reprogramming factors, the small molecules that are used in this chemical approach are cell permeable; cost-effective; and easy to synthesize, preserve, and standardize; and their effects can be reversible," says mouse study co-author Hongkui Deng of the Peking University Stem Cell Research Center. "In addition, the use of small molecules can be fine-tuned by adjusting their concentrations and duration, and the approach bypasses the technical challenges and safety concerns of genetic manipulations, which may be promising in their future applications."

Deng worked for four years with Zhen Chai and Yang Zhao, also of Peking University, to identify the small molecules that could create chemically induced mouse neurons. Researchers had been close for years, but a transcription factor was always necessary to complete the transformation. Through many chemical screens they identified the key ingredient, I-BET151, which works to suppress transcription in skin cells. They then found the right steps and conditions to mature the neurons post-transformation. 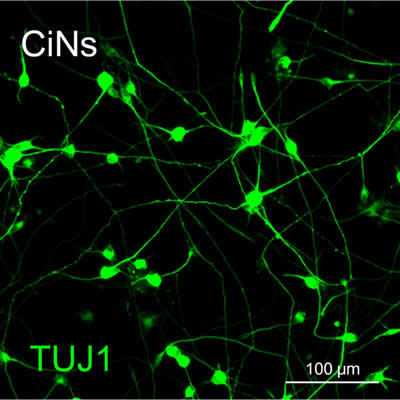 The authors of both papers aim to learn more about the biology behind chemically induced reprogramming and to make the protocols more efficient. While their success is promising, there are still a number of hurdles to overcome.

"We hope in the future that the chemical approaches would be more robust in inducing functional mature neurons," Deng says. "In addition, we are attempting to generate specific neuronal subtypes and patient-specific functional neurons for translational medicine by using pure chemicals."

Jian Zhao, of the human study, says: "It should be possible to generate different subtypes of neurons with a similar chemical approach but using slightly modified chemical cocktails." She adds: "It also needs to be explored whether functional neurons could be induced by chemical cocktails in living organisms with neurological diseases or injury."