A device that keeps extra-close tabs on the ups and downs of blood glucose levels reveals that most people see only a partial picture of the sugar circulating in their blood, according to a study by researchers at the Stanford University School of Medicine.

It turns out that the level of sugar in an individual’s blood — especially in individuals who are considered healthy — fluctuates more than traditional means of monitoring, like the one-and-done finger-prick method, would have us believe. Often, these fluctuations come in the form of “spikes,” or a rapid increase in the amount of sugar in the blood, after eating specific foods — most commonly, carbohydrates.

“There are lots of folks running around with their glucose levels spiking, and they don’t even know it,” said Michael Snyder, PhD, professor and chair of genetics at Stanford and senior author of the study. The covert spikes are a problem because high blood sugar levels, especially when prolonged, can contribute to cardiovascular disease risk and a person’s tendencies to develop insulin resistance, which is a common precursor to diabetes, he said.

“We saw that some folks who think they’re healthy actually are misregulating glucose — sometimes at the same severity of people with diabetes — and they have no idea,” Snyder said.

The insight came to him after he and collaborators at Stanford gave study participants a continuous glucose-monitoring device, which superficially pokes into the surface layer of the skin and takes constant readings of sugar concentrations in the blood as it circulates. With the constant readouts providing more detailed data, Snyder’s group saw not only that glucose dysregulation is more common than previously thought, but they also used the data to start building a machine-learning model to predict the specific foods to which people spike. The goal is to one day use the framework to compile data from an individual and, based on their continuous glucose readout, direct them away from particularly “spikey” foods.

Some are ‘spikier’ than others

Most people who periodically check their blood sugar levels do so with a quick lance to the finger and a device that reads out the blood glucose concentration. The problem with this method is that it captures only a snapshot in time. The amount of sugar in a person’s blood is not a constant; it ebbs and flows depending on what the person has eaten that day, down to the specific kind of carbohydrate. (For instance, rice, breads and potatoes are all different kinds of carbohydrates, yet people often digest them differently.)

To get a better read on glucose levels, Snyder fitted 57 people with a device that continuously took blood glucose readings over about two weeks. Most of the participants were healthy or showing signs of prediabetes, and five had Type 2 diabetes. Data sent back to the lab showed that there were multiple types of spikers, which were classified into three overarching “glucotypes.” The glucotype categories — low, moderate and severe — are basically rankings of spike intensity.

“We’re very interested in what it means to be ‘healthy’ and finding deviations from that,” said Snyder, who holds the Stanford W. Ascherman, MD, FACS Professorship in Genetics. These glucotypes, he said, are subject to change based on diet. The researchers ultimately have two goals for their work: When people spike, catch it early; and understand what makes a person spike, and adjust their diet to bring the glucotype into the “low” range.

“We think that these continuous glucose monitors will be important in providing the right information earlier on so that people can make changes to their diet should they need to,” he said.

Blame it on the cornflakes

In getting at the subtleties of spiking, Snyder conducted a sub-study in which 30 participants using the continuous glucose monitor alternated between three breakfasts: a bowl of cornflakes with milk, a peanut butter sandwich and a protein bar.

The trio of tests yielded some fairly startling results: After eating one or more of the meals, more than half of the group — whose prior blood sugar tests showed that they were “healthy” — spiked at the same levels as those of people who were prediabetic or diabetic. 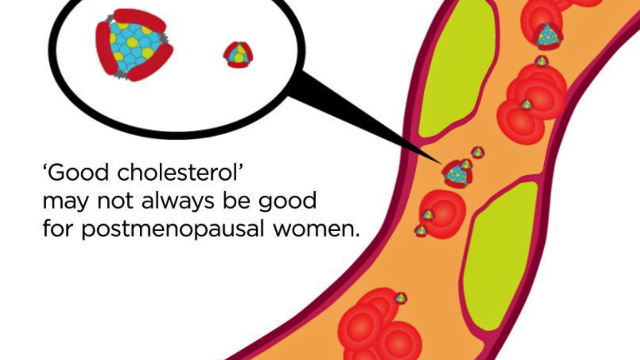 ‘Good Cholesterol’ May Not Always be Good for Postmenopausal Women

END_OF_DOCUMENT_TOKEN_TO_BE_REPLACED

What’s more, nearly everyone spiked after eating the cereal.

“We saw that 80 percent of our participants spiked after eating a bowl of cornflakes and milk,” Snyder said. “Make of that what you will, but my own personal belief is it’s probably not such a great thing for everyone to be eating.”

Still, the variables that elicit spikes in an individual — genetics; the population of microbes that live in our bodies; and epigenetics, or changes to gene expression — are critical to understanding glucose dysregulation and the foods that cause glucose spikes. Those parameters are not set in stone, which is why Snyder encourages everyone — including those who think of themselves as healthy — to check their blood sugar with continuous glucose monitoring about once a year.

“Right now we have information about people who do and don’t spike, or are super-spikers, but we need to get smart about why it’s happening,” Snyder said. “I think understanding the microbiome and manipulating it is going to be a big part of this, and that’s where our research is headed next.”