Complete the form below to unlock access to this Audio Article: "Elemental Iron and Copper Found in the Brains of People With Alzheimer’s Disease"

A new study identifies the presence of the elemental metals iron and copper within plaques taken from the brains of people with Alzheimer’s disease (AD).

As odd as it may sound, our squishy, biological brains need metals to function. In fact, any organism that relies on chemical processes called oxidation and reduction will require some forms of metal to survive.

In the brain, metals like iron, copper and zinc play important roles in many processes. They usually exist as ions, charged molecules that are used in the chemical reactions that fuel biological pathways. While their important role in the healthy brain is well established, the balance of metal and metal ions in the brain has become the focus of neurodegenerative researchers who suggest disruption of biological levels of these elements may contribute to proteinopathies like AD.

Now, UK researchers have published a paper in Science Advances that reveals tiny amounts of non-ionic elemental metal deposits inside amyloid plaques. These hallmarks of AD are often exploited as therapeutic targets for the condition. The recently approved monoclonal antibody aducanumab is designed to bind to aggregated forms of β-amyloid.

This finding, say the researchers, led by Keele University professor Neil Telling, is the first recorded evidence of elemental copper in the human brain. In an email to Technology Networks, Telling expanded on what this finding might mean for the brain: “The metallic forms of iron and copper we observed that are presented in this paper have distinctly different chemical and magnetic properties from their less reactive oxide forms in which iron and copper are predominately stored in the human body. The surfaces of metallic copper and iron are highly unstable and readily react with their surroundings, with potential to cause damage to brain cells.” 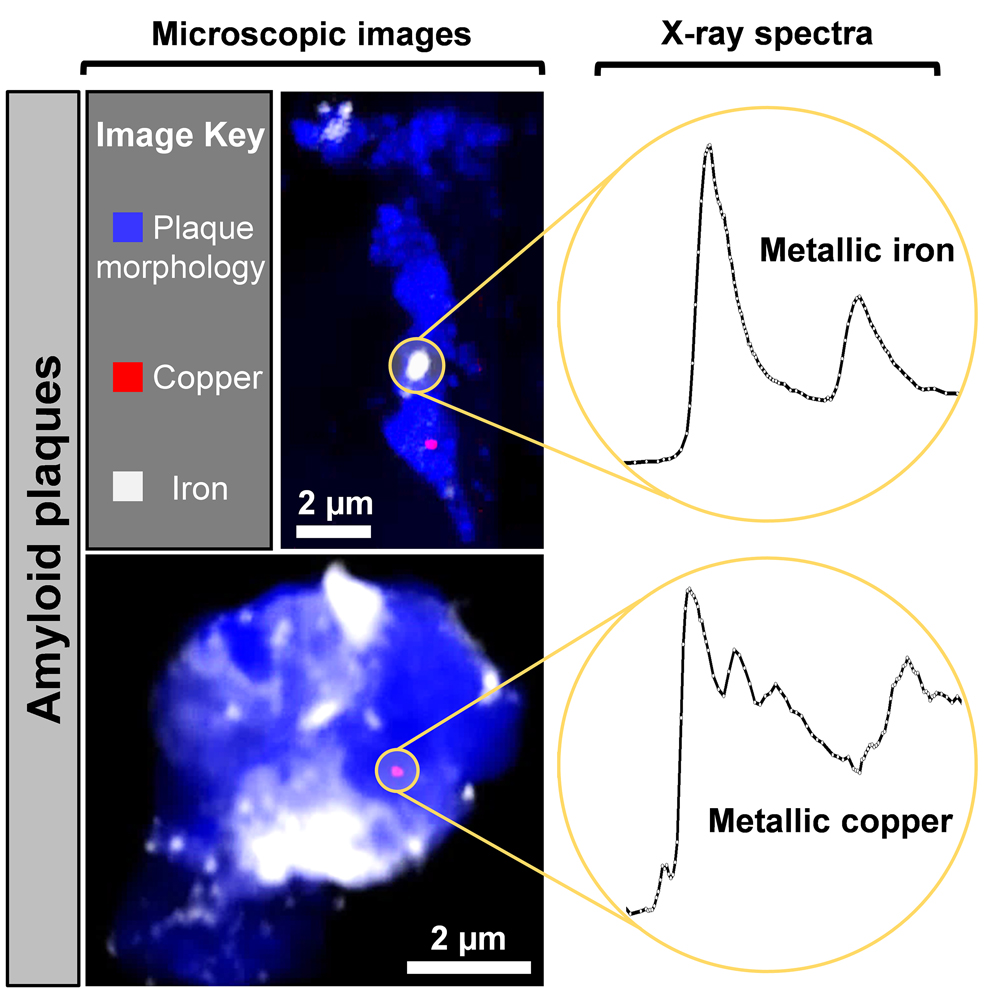 The metals are classed as biogenic, meaning they have been produced by the body, and were found in minuscule amounts that were only identifiable using a sophisticated imaging technique called synchrotron-based scanning transmission X-ray microscopy (STXM).

The researchers found the deposits unexpectedly while analyzing the brains of two deceased Alzheimer’s patients. STXM allows researchers to see what elements are present in specific areas of brain tissue, down to a resolution of roughly 20 nanometers – by comparison, a human hair is roughly 90,000 nanometers wide.

The metals were found in amyloid plaques in the patients’ frontal and temporal lobes, regions that contain structures essential to cognition such as the hippocampus. Interestingly, the iron found within the plaques appeared to be magnetic, a finding that was confirmed by X-ray magnetic circular dichroism (XMCD) analysis. This technique involved a magnetic field around the samples, which were then bombarded with polarized light rays. By then looking at the X-ray absorption spectra from the samples, the magnetism of the iron could be identified.

What do metals in the brain mean?

The team noted that these tiny deposits of elemental metal were accompanied by ionized metals. The authors suggest that repeated reduction and oxidation reactions, where the elements moved between ionization states, could be occurring within the plaques.

These reactions could be prompted by the activity of reactive oxygen species (ROS), molecules that also contribute to neuroinflammation and cell death in Alzheimer’s. The authors say that elemental metals could contribute to this inflammatory state. The authors propose that strategies targeting these metals could make it easier to diagnose Alzheimer’s using iron-sensitive imaging and may even help to lower the oxidative stress burden in the Alzheimer’s brain.

Before these theories can be firmed up, more evidence will be required. “The significance of these highly reactive metallic forms for neurodegenerative diseases such as Alzheimer’s, remains to be seen, but their discovery will help researchers to understand the complex biochemistry of the brain, including how these metals could be involved in disease processes. It should also answer ongoing questions regarding how metals interact chemically with proteins such as amyloid proteins that Alzheimer’s plaques are formed from. Ongoing related studies are exploring the links between the form of metals in the brain, and other neurodegenerative diseases such as Parkinson’s. The consideration of metal-based biochemical interactions should help to build new hypotheses to unravel the mechanisms involved in these complex brain diseases,” says Telling.