Complete the form below to unlock access to this Audio Article: "In Utero Fever Conditions Recreated in Animal Model to Explore Effects on Development"

Fevers in a mother’s first trimester of pregnancy increase the baby’s risk for some heart defects and facial deformities such as cleft lip or palate, but exactly how this happens is unclear. Scientists have debated whether a virus or other infection causes the defects, or if fever alone is the problem.

UC Berkeley researchers have helped find evidence indicating that the fever itself, not its cause, is what interferes with the development of the heart and jaw during the first three to eight weeks of pregnancy. The findings, demonstrated in animal embryos, were published Oct. 10 in the journal Science Signaling.

The work, a collaboration with scientists at Duke University, provides new leads as scientists continue investigating heart defects, which affect 1 percent of live births in the U.S., and cleft lip or palate, affecting about 4,000 infants per year.

“Congenital heart and cranial facial defects are very common in live births, but most of the time they have unknown causes,” said senior author Chunlei Liu, an associate professor of neuroscience and electrical engineering and computer sciences at Berkeley. “Our study identified a specific molecular pathway that links maternal fever directly to some of those defects.”

The results suggest a portion of congenital birth defects could be prevented if fevers are treated through the judicious use of acetaminophen during the first trimester, said co-senior author Eric Benner, a neonatologist and assistant professor of pediatrics at Duke.

“My hope is that right now, as women are planning to become pregnant and their doctors advise them to start taking prenatal vitamins and folic acid, their doctor also informs them if they get a fever, they should not hesitate to call and consider taking a fever reducer, specifically acetaminophen (Tylenol), which has been studied extensively and determined to be safe during the first trimester,” Benner said. “While doctors advise most women to avoid any drug during pregnancy, there may be benefits to taking acetaminophen to reduce fever. Women should discuss all risks and benefits with their doctors.”

Benner cautions that nonsteroidal anti-inflammatory drugs (NSAIDs) such as ibuprofen, naproxen and aspirin also reduce fevers, but should not be used during pregnancy. There is also ongoing debate over whether sustained use of acetaminophen is safe during pregnancy to manage ongoing conditions such as arthritis, Benner said.

“However, its judicious use for an acute problem such as fever is considered safe. These findings suggest we can reduce the risk of birth defects that otherwise could lead to serious health complications requiring surgery,” he said.

To observe how fever impacts a developing fetus, the researchers studied zebrafish and chicken embryos. Among their discoveries, the scientists found that neural crest cells — cells that are critical building blocks for the heart, face and jaw — contain temperature-sensitive properties.

The researchers engineered a noninvasive magnet-based technology to create fever-like conditions in two specific temperature-sensitive ion channels called TRPV1 and TRPV4 in the neural crest cells involved in developing the heart and face. When those neural crest cells were subjected to conditions mimicking a transient fever, the embryos developed craniofacial irregularities and heart defects, including double outlet right ventricle, Tetralogy of Fallot and other outflow obstructions. 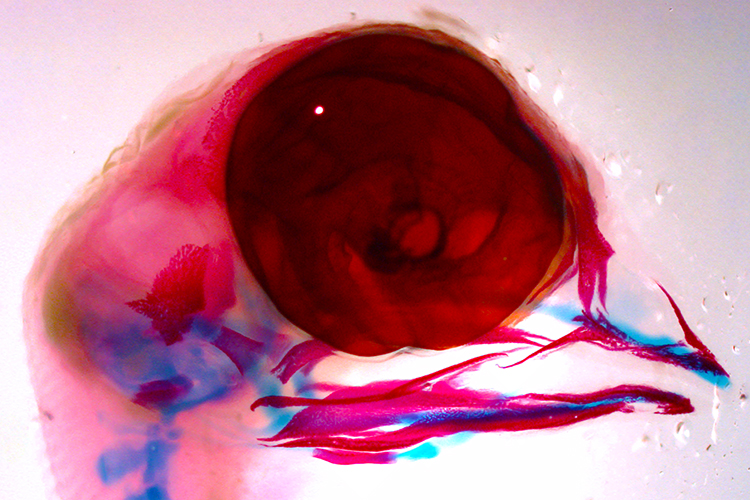 In the study, chick embryos were stained blue and red to identify craniofacial features. High temperatures caused severe craniofacial defects in chicks, dramatically shortening the upper beak compared to normal controls. This photo was featured on the cover of Science Signaling. NeuroscienceNews.com image is credited to Liu, et al.

With electrical magnetic waves coupled with engineered ion channel proteins, we are able to impact specific biological cells remotely without affecting other biochemical environments,” Liu said. “The technique can be applied to study many different cell types and their roles at various developmental stages.”

The type of birth defect depends on whether the fever occurs during heart development or head and face development. What researchers still do not know is whether or how the severity or duration of a fever impacts development. Besides laboratory experiments, future epidemiological and clinical studies are also needed to evaluate those factors.