Molly Campbell is a senior science writer at Technology Networks. She holds a first-class honors degree in neuroscience. In 2021 Molly was shortlisted for the Women in Journalism Georgina Henry Award.
Learn about our editorial policies
Credit: Angela Handfest on Unsplash.

Complete the form below and we will email you a PDF version of "Irresistible to Mosquitos? It Might Be Your Odors"

Researchers from The Rockefeller University found that fatty acids released from the skin might produce a “fragrance” that mosquitos find irresistible. Their study is published in Cell.

Are you a “mosquito magnet”?

Have you ever been on holiday to a warmer climate and returned covered in mosquito bites? Meanwhile, other members of the holiday party appear to have escaped the feeding frenzy?

Mosquito “magnets” – people that appear to be bitten more than others – have intrigued scientists for many years. Theories, some with scientific origins and others categorically known to be “old wives’ tales”, have proposed that a mosquito’s attraction could be based on several factors: blood type, sugar level, skin temperature, alcohol consumption, metabolism, etc.

Professor Leslie Vosshall, head of Rockefeller’s Laboratory of Neurogenetics and Behavior, and colleagues decided to investigate one of the leading theories behind mosquito snack preference: the odors produced by our skin – our natural “eau de parfum”, if you will.

Mosquitos “swarm” to one particular participant

To conduct the study, Vosshall and team recruited eight participants that were required to wear nylon stockings over their forearms for six hours a day for several days – admittedly not the trendiest fashion aesthetic.

The nylon stockings were then collected and Aedes Aegypti mosquitos were exposed to the stockings, which were matched up against each other until all pairs of stockings had been tested. The research team were blinded to which stockings had been worn by each of the participants.

Aedes Aegypti, sometimes known as the “yellow fever mosquito”, is a vector that can transmit dengue, Zika, yellow fever and chikungunya viruses – some of the world’s deadliest pathogens.

The team discovered the mosquitos had a particular attraction to one set of stockings, “Subject 33” – they would swam towards them. “It would be obvious within a few seconds of starting the assay,” Dr. Maria Elena De Obaldia, a former postdoc in the Vosshall lab and co-author of the study, said. “It’s the type of thing that gets me really excited as a scientist. This is something real. This is not splitting hairs. This is a huge effect.”

Acids produced in the skin determine our appeal to mosquitos

Using gas chromatography-quadrupole time of flight-mass spectrometry (GC-QTOF-MS), the scientists analyzed the sebum from the nylon stockings to explore what might explain the preferences at the molecular level. They found that participants classified as “mosquito magnets” produced carboxylic acids at a higher level than those that were less appealing to the mosquitos. Carboxylic acids are organic compounds that, in the skin, are utilized by bacteria to create our unique body odors.

To further substantiate their findings, the researchers enrolled an additional 56 participants to repeat their behavioral assay and sebum analysis. Again, Subject 33 was found to be the most appealing “parfum” for the mosquitos. “Some subjects were in the study for several years, and we saw that if they were a mosquito magnet, they remained a mosquito magnet,” said De Obaldia. “Many things could have changed about the subject or their behaviors over that time, but this was a very stable property of the person.”

Can we intercept and manipulate mosquitos’ love for bodily odors? Apparently not

Mosquitos can transmit diseases that are incredibly harmful to human health. Their burden on public health strategies has made them a large focus of gene drive research, whereby genetic engineering can be used to introduce certain qualities or phenotypes into an organism – such as the inability to transmit a disease, or reproduce.

An introduction to gene drives by Dr Jennifer Baltzegar, a population geneticist with international interdisciplinary research experience currently working as a postdoctoral research fellow at North Carolina State University. Credit: Teach Me in 10.

Vosshall and colleagues wondered if their findings could be used to develop a strategy that decreases mosquito attraction. Mosquitos detect human odors via two sets of receptors: ionotropic receptors (IR) and Orco receptors. The researchers genetically altered the mosquitos in their study such that they were missing one or both of the receptors. To their dismay, they found that Orco mutants could still distinguish between “mosquito magnets” and those that had been deemed less attractive in the behavioral assay. IR mutants lost their attraction to a “varying degree” but could still locate the stockings. 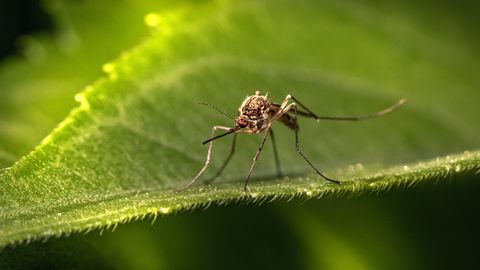 END_OF_DOCUMENT_TOKEN_TO_BE_REPLACED

An alternate research direction might be to manipulate the skin microbiome using sebums from “low attractors” as, well, a “moisturizer” of sorts. “We haven’t done that experiment,” Vosshall explained. “That’s a hard experiment. But if that were to work, then you could imagine that by having a dietary or microbiome intervention where you put bacteria on the skin that are able to somehow change how they interact with the sebum, then you could convert someone like Subject 33 into a Subject 19. But that’s all very speculative.”

This article is a rework of a press release issued by The Rockefeller University. Material has been edited for length and content.