"It's too early to use these biomarkers to definitively predict whether individual patients will develop Alzheimer's disease, but we're working toward that goal," said senior author Anne Fagan, PhD, a professor of neurology. "One day, we hope to use such measures to identify and treat people years before memory loss and other cognitive problems become apparent."

The study focused on data gathered over 10 years and involved 169 cognitively normal research participants ages 45 to 75 when they entered the study. Each participant received a complete clinical, cognitive imaging and cerebrospinal fluid biomarker analysis every three years, with a minimum of two evaluations.

Among the biomarkers evaluated in the new study were:

Amyloid beta 42, a protein that is the principal ingredient of Alzheimer's plaques; 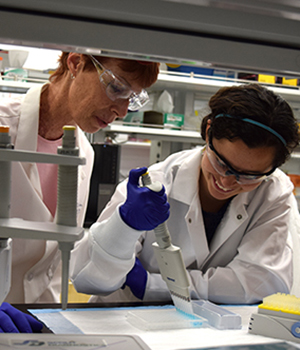 Tau, a structural component of brain cells that increases in the cerebrospinal fluid as Alzheimer's disease damages brain cells;

YKL-40, a newly recognized protein that is indicative of inflammation and is produced by brain cells; and

The presence of amyloid plaques in the brain, as seen via amyloid PET scans.

The scientists found that drops in amyloid beta 42 levels in the cerebrospinal fluid among cognitively normal participants ages 45-54 are linked to the appearance of plaques in brain scans years later. The researchers also found that tau and other biomarkers of brain-cell injury increase sharply in some individuals as they reach their mid-50s to mid-70s, and YKL-40 rises throughout the age groups focused on in the study.

Previous research has shown that all of these biomarkers may be affected by Alzheimer's disease, but this is the first large data set to show that the biomarkers change over time in middle-aged individuals.

All of these changes were more pronounced in participants who carried a form of a gene that significantly increases the risk of Alzheimer's disease. The gene is known as APOE, and scientists have known that people with two copies of a particular version of this gene have up to 10 times the risk of developing Alzheimer's as those with other versions of the gene.

The data came from the ongoing Adult-Children Study at the university's Charles F. and Joanne Knight Alzheimer's Disease Research Center. Scientists have been following participants with and without a family history of the disease, with the aim of identifying Alzheimer's biomarkers most closely associated with the development of full-blown disease years later.

"Alzheimer's is a long-term process, and that means we have to observe people for a long time to catch glimpses of it in action," Fagan said.