One of the most basic yet important surgical skills to keep a patient alive and intact may be closing wounds. It seems that doctors will now get the job done with more ease thanks to new, nontoxic surgical glue that instantly seals a bleeding wound and helps it heal without a scar or inflammation.

The product, called LAMBA, has emerged as a promising candidate for an ideal bioadhesive for its outstanding properties; LAMBA’s compatibility with the human body, strong adhesiveness in wet conditions, and convenient handling point to the possibility of myriad medical applications. 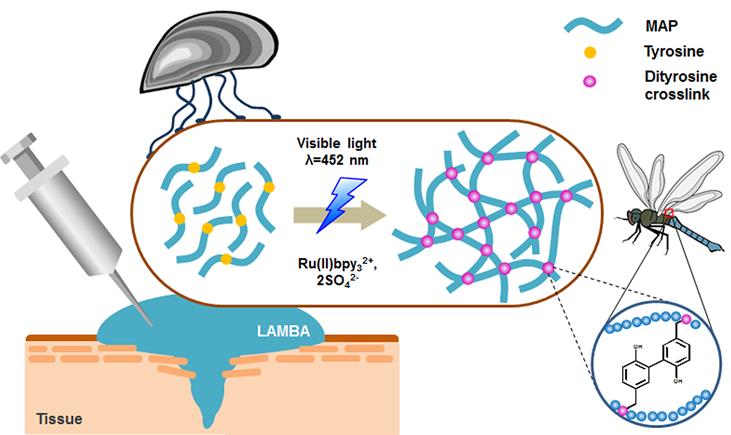 Mechanical fasteners like sutures and staples have accounted until recently for a major portion of conventional medical devices that are used to hold body tissues together. The invasive nature of traditional methods, however, has been the biggest drawback causing severe tissue damage, complicated post-treatment management, and scars. Their use is also limited when handling delicate tissues and internal organs, giving rise to a need for alternatives that do not require penetration. Tissue adhesives have been increasingly pursued these days as a more desirable bonding material, but the adhesives currently available in the market likewise have their own limitations. While chemically derived adhesives such as cyanoacrylates are likely to provoke an adverse reaction, biologically derived ones are not strong enough to close wounds like sutures do. A common and critical challenge, moreover, is that most surgical glues do not stick in a wet environment, which is essential for medical applications.

Dr. Hyung Joon Cha, a professor of the Department of Chemical Engineering at POSTECH, and his student, Eun Young Jeon, have developed a new approach that readily overcomes these drawbacks. The new product LAMBA, a focus of their recent publication in Biomaterials, is an upgrade version of previously known mussel-inspired adhesives that copy mussels’ ability to fix their body under water. Instead of producing recombinant mussel adhesive proteins (MAPs) by modifying DOPA, a key element for the adhesive property, E.Y. Jeon et al., have created the new tissue adhesive via a photochemical reaction using blue visible light.

E.Y. Jeon et al gained the idea for this more economic, facile, and reliable strategy from dityrosine crosslinks that are often found in dragonfly wings and insect cuticles. When visible light triggers a photo-oxidation reaction in MAPs plentiful of tyrosine, neighboring tyrosine residues are instantly coupled into dityrosine crosslinks, which in turn enhance structural stability and adhesive properties of the new MAPs in the form of hydrogel.

The researchers report that animal studies have proved LAMBA’s superiority to existing options including sutures and other surgical glues, potentially qualifying for an ideal tissue bonding material. The new adhesive hydrogel not only closes an open wound on a bleeding site within less than 60 seconds, but also effectively facilitates the healing process without inflammation or a scar.