Molly Campbell is a senior science writer at Technology Networks. She holds a first-class honors degree in neuroscience. In 2021 Molly was shortlisted for the Women in Journalism Georgina Henry Award.
Learn about our editorial policies
MIT engineers have developed a technique that allows them to rapidly image many different proteins within a synapse. At bottom right is a composite of the other images. Credit: Syuan-Ming Guo and Li Li.

Quickly dashing off to work in a bid to avoid the obligatory "morning" conversation with your neighbors might be your style, but in the brain, it's a totally different story. Neighboring neurons in the brain talk – a lot. They communicate day and night via electrical and chemical signals that are sent across synapses.

To enable this communication, the synapse is filled with a whole host of molecular machinery, including proteins. Many of these proteins form synaptic scaffolds that are implicated in the secretion of neurotransmitters and the processing of signals. When proteins go awry, we often see impaired communication in the brain, which can result in conditions such as autism or schizophrenia. Therefore, it is important for scientists to characterize the proteins and understand their healthy physiological functions, in order to decipher exactly what goes wrong in diseased states.

Researchers at the Massachusetts Institute of Technology, in collaboration with the Broad Institute of Harvard, have devised a novel approach to rapidly image the synaptic proteins at high resolution, using a multiplexed imaging approach.

The research is led by Mark Bathe, a professor of biological engineering at MIT, and Jeff Cottrell, director of translational research at the Stanley Center for Psychiatric Research at the Broad Institute. Their results are published in the journal Nature Communications.

"Multiplexed imaging is important because there's so much variability between synapses and cells, even within the same brain," says Bathe. "You really need to look simultaneously at proteins in the sample to understand what subpopulations of different synapses look like, discover new types of synapses, and understand how genetic variations impact them."

Due to the vast array of proteins that reside in the synapse, conventional fluorescence microscopy has limited applications; at most, it can only image four proteins at a time. This makes for a slow and tedious imaging process that can halt research.

The MIT team have developed a novel technique that is based on an existing method, DNA PAINT, originally created by Ralf Jungman of the Max Planck Institute of Biochemistry. In DNA PAINT, scientists attach a DNA-antibody probe to the proteins of interest, effectively "labeling" the protein. They then image the proteins by delivering a fluorescent DNA "oligo" that binds with the DNA-antibody probes.

The DNA strands have a low affinity for one another, and so they bind and unbind, which creates a blink of fluorescence that can be captured using super-resolution microscopy. However, the imaging of each individual protein can take half an hour, a drawback when many proteins in a sample require imaging.

Building on this technique, Bathe altered the DNA-dye imaging probe so that it can bind more tightly to the DNA-antibody, using "locked nucleic acids". The resulting signal is brighter, and so the imaging can be achieved quicker, albeit at a slightly lower resolution. They have named their novel approach, PRISM.

"When we do 12 or 15 colors on a single well of neurons, the whole experiment takes an hour, compared with overnight for the super-resolution equivalent," Bathe says.

Applying this technique, the scientists were able to label 12 proteins in the synapse, including scaffolding proteins and proteins known to mark excitatory and inhibitory synapses. One such protein was shank3, a scaffold protein associated with schizophrenia.

"Inhibitory and excitatory are the canonical synapse types, but it is speculated that there are numerous different subtypes of synapses, without any real consensus around what those are," Bathe says.

Exploring the effects of tetrodotoxin

Tetrodotoxin (TDX), is a potent neurotoxin that strengthens synaptic connections between neurons. You may be familiar with TDX if you're knowledgeable about puffer fish – they produce it in their liver in quantities that, if consumed by a human, can produce paralysis of the diaphragm and cause suffocation. 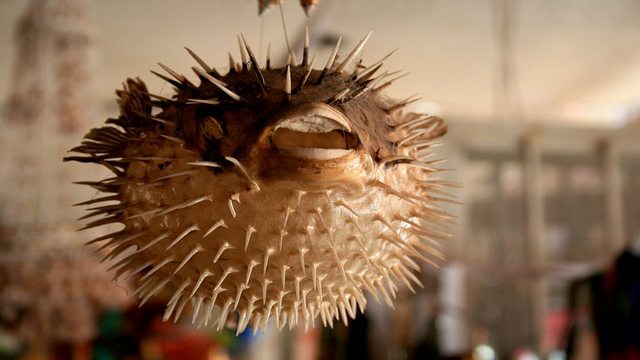 In this study, the authors demonstrated that, using their novel technique, they could measure changes in synaptic protein levels post-application of TDX.

"Using conventional immunofluorescence, you can typically extract information from three or four targets within the same sample, but with our technique, we were able to expand that number to 12 different targets within the same sample. We applied this method to examine synaptic remodeling that occurs following treatment with TDX, and our finding corroborated previous work that revealed a coordinated upregulation of synaptic proteins following TDX treatment," says Eric Danielson, an MIT senior postdoc who is an author of the study.

Bathe and colleagues now plan to use PRISM to explore how the structure and composition of synapses are directly affected by manipulating genes that are linked with various disorders. Genomic sequencing has provided insight into genetic components of conditions such as autism and schizophrenia – PRISM could take this insight to the next level.

"Understanding how genetic variation impacts neurons' development in the brain, and their synaptic structure and function, is a huge challenge in neuroscience and in understanding how these diseases arise," Bathe concludes.