Molly Campbell is a science writer at Technology Networks. She holds a first-class honors degree in neuroscience. In 2021 Molly was shortlisted for the Women in Journalism Georgina Henry Award.
Learn about our editorial policies
Credit: Johannes Plenio on Unsplash.
Read time:

Complete the form below and we will email you a PDF version of "Protein Analysis of 800,000-Year-Old Human Fossil Clarifies Dispute Over Ancestors "

Scientists from the University of Copenhagen, in collaboration with colleagues from the CENIEH (National Research Center on Human Evolution) in Burgos, Spain, and other institutions, have retrieved genetic information from an 800,000-year-old human fossil for the first time. Their study is published in the journal Nature.

Fresh eyes on an ancient problem

The scientists analyzed an 800,000-year-old tooth belonging to the hominin species Homo antecessor. The fossils were originally discovered by José María Bermúdez de Castro and his team in 1994 in stratigraphic level TD6 from the Gran Dolina cave site, Spain.

"Homo antecessor is an enigmatic hominin fossil from Europe. Due to the large amount of fossil specimens attributed to this species, all recovered from Gran Dolina, Atapuerca, Spain, it has been well-studied.  However, its evolutionary relationship with us (Homo sapiens), Neanderthals and Denisovans has been discussed intensely within the paleoanthropological field," Frido Welker, Postdoctoral Research Fellow at the Globe Institute, University of Copenhagen, and first author on the paper, told Technology Networks.

Based on the physical shape and appearance of the fossils, scientists initially concluded that H. antecessor was the last common ancestor to modern humans and Neanderthals. In subsequent years, this supposition has been heavily debated.

“Much of what we know so far is based either on the results of ancient DNA analysis, or on observations of the shape and the physical structure of fossils. Because of the chemical degradation of DNA over time, the oldest human DNA retrieved so far is dated at no more than approximately 400.000 years”, said Enrico Cappellini, Associate Professor at the Globe Institute, University of Copenhagen, and leading author on the paper, in a recent press release.

In latest study published in Nature, Welker and colleagues adopted an alternative methodological approach – paleoproteomics – to take a "fresh" look at this debate.

"In Paleoproteomics we study ancient proteins preserved in archaeological or paleontological tissues. Proteins preserve over very long-time scales (longer than DNA, for example) and in a wide variety of tissues, which make them an interesting source of ancient biomolecular information for an incredibly diverse range of questions and disciplines," Welker said.

A key piece of equipment in the paleoproteomics toolbox is mass spectrometry (MS). Using this technique, the scientists were able to sequence ancient proteins from the fossilized tooth's dental enamel. The sequence of amino acids within the protein was compared with protein sequences that are "read" to other hominins such as H. sapiens and Neanderthals to explore how genetically related they are. 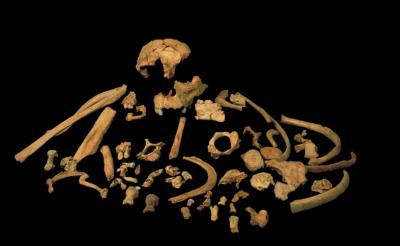 I asked Welker how the analysis of proteins via MS overcomes the limitations of DNA analysis. He told me that: "DNA breaks up into smaller pieces quicker than proteins do. As a result, protein sequences survive longer than DNA. As the protein sequence is coded for by the genome, the protein sequence itself can also harbor some genetic information. In this case, we are able to study the evolutionary relationships between ancient human species even in the absence of DNA preservation of one of them (H. antecessor)."

Through their analysis, the team were able to confidently place H. antecessor in the human family tree as a sister group to the group that contains H. sapiens, Neanderthals and the Denisovans.

"I am happy that the protein study provides evidence that the Homo antecessor species may be closely related to the last common ancestor of H. sapiens, Neanderthals, and Denisovans. The features shared by H. antecessor with these hominins clearly appeared much earlier than previously thought. H. antecessor would therefore be a basal species of the emerging humanity formed by Neanderthals, Denisovans, and modern humans", adds José María Bermúdez de Castro, Scientific Co-director of the excavations in Atapuerca and co-corresponding author on the paper.

As for the next steps, Welker told Technology Networks that the scientists are interested in exploring the potential of hominin Paleoprotoemics in even older time periods and in younger fossils: "I think there is an incredibly interesting set of younger hominin fossils that we could potentially study using ancient protein analysis," he concludes.