Invading microbial pathogens must scavenge essential nutrients from their host organism in order to survive and replicate. To defend themselves from infection, hosts attempt to block pathogens’ access to these nutrients.

Now researchers at MIT have discovered the vital role a protein, calprotectin, plays in this process, known as “nutritional immunity.” The researchers have described the process by which human calprotectin prevents invading pathogens from obtaining iron, an extremely important nutrient.

Transition metal ions, such as iron, zinc, and manganese, are essential for all organisms, according to Elizabeth Nolan, an associate professor of chemistry at MIT, who led the research.

“What that means in the context of the host-pathogen interaction is that an invading microorganism needs to acquire these nutrient metal ions from the host,” Nolan says. “That is a challenge because the host tries to restrict metal-ion availability during infection, using a variety of strategies,” she says. 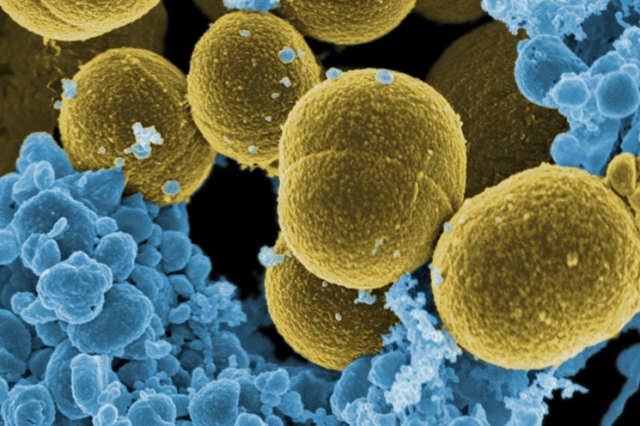 One such strategy is the use of proteins that chelate, or bind with metal ions, and so take them out of the pathogen’s reach.

Previous research has identified that the protein calprotectin can sequester zinc and manganese. But while important, these nutrients alone do not fully explain the broad-spectrum antimicrobial effect that calprotectin is known to have, since different organisms have different metal-ion requirements, Nolan says.

So Nolan and her colleagues began to investigate whether the protein is also capable of sequestering iron.

The researchers first added calprotectin to a bacterial growth medium containing metal ions, to determine which metals it would bind to, and under what conditions. They found that the protein did indeed deplete the iron from the medium, and the presence of excess calcium in the medium resulted in substantially greater iron depletion.

This calcium effect was in line with previous work by the researchers, which had shown that the protein “morphs” into a far more effective scavenger of zinc and manganese ions when calcium is present.

“Calcium converts calprotectin into a form that more readily sequesters iron, so it binds to it with higher affinity,” Nolan says.

Unlike when scavenging zinc and manganese, however, the researchers observed that the ability of calprotectin to sequester iron also depended on the presence of a reducing agent, beta-mercaptoethanol (BME).

This observation suggests that the protein has a preference for scavenging ferrous iron, or iron(II). That is because the reducing agent, BME, will keep iron in the iron(II) oxidation state.

The researchers then added bacteria to the calprotectin-treated medium, in a bid to determine what effect this reduction in iron concentration would have on the invading pathogens. They found that the growth of all the bacteria was inhibited by the lack of available iron.

In the case of Gram-positive bacteria such as Staphylococcus aureus, however, the microorganisms required mixtures of iron, manganese, and zinc to show maximum growth recovery, she says.

“The data indicates that the ability of calprotectin to sequester iron has a significant impact on the growth of Gram-negative organisms,” Nolan says. “Iron sequestration also contributes to the growth inhibition of Gram-positive organisms, but we need to add more than just iron back in, in order for them to recover,” she says.

When the researchers then added both calprotectin and bacteria to a growth medium containing the radioactive isotope iron-55, they were able to observe that the presence of the protein prevented the microorganisms from acquiring the metal.

Finally, the researchers performed biochemical and spectroscopic analysis — the latter in collaboration with Carsten Krebs, a professor of chemistry, biochemistry, and molecular biology at Penn State University — to characterize the iron(II) binding site of calprotectin. They found that calprotectin uses an unusual hexahistidine motif to bind iron(II).

The research suggests a model by which calprotectin, which is housed in the cytoplasm of a cell, uses changes in calcium concentration to tune its metal-sequestering function, Nolan says.

“Under resting conditions calcium ion concentrations are low [within the cytoplasm], but then when calprotectin is released into the extracellular space at the site of an infection, the concentration of calcium is orders of magnitude higher,” she says. “Calprotectin then binds to calcium and converts to its high-affinity form, and that allows it to sequester metals from microbes.”

This study highlights the versatility of calprotectin, according to David Giedroc, a professor of chemistry at Indiana University who was not involved in the research.

“Calprotectin is exclusively regarded by the community as a calcium-activated manganese- and zinc-binding protein, and all the physiological effects of calprotectin in nutritional immunity have previously been attributed to the withholding of these two important transition metal ions only,” Giedroc says.

“This new work establishes clearly, for the first time, that [calprotectin] has the ability to bind iron(II), and this activity appears to be important for inhibition of growth of a wide range of bacterial pathogens,” he says.