A protein that’s common throughout the body plays a key role in regulating glucose levels, says new research conducted in the Cell Signal Unit at the Okinawa Institute of Science and Technology Graduate University (OIST) and Riken Center of Integrative Medical Sciences. Called CNOT3, this protein was found to silence a set of genes that would otherwise cause insulin-producing cells to malfunction, which is related to the development of diabetes.

Diabetes is a common disorder that causes very high blood glucose levels. Left untreated, it can lead to serious health problems like kidney failure, heart disease, and vision loss. This disorder occurs when there isn’t enough insulin in the body or when insulin-induced responses are weakened. Insulin normally lets glucose into cells for energy-use and so, without it, glucose builds up in the blood instead. A lack of insulin is often because the pancreatic beta cells, which normally synthesize and secrete insulin, have stopped functioning correctly.

“We know that defects in beta cells can lead to high levels of glucose in the blood and, eventually, diabetes.” said Dr. Dina Mostafa, former PhD student in the Unit and first author of the paper published in Communications Biology. “Our results suggest that CNOT3 has a hand in this and plays a key role in maintaining normal beta cell function.”

Knocking out CNOT3 found to lead to diabetes in mice

CNOT3 is a jack-of-all-trades. Many organs throughout the body express it, and it regulates different genes in different tissues. But its activity has a common basis – it helps to keep cells alive, healthy, and functioning correctly. It does this through several different mechanisms, such as producing the right proteins or suppressing certain genes.

Here, researchers studied its function in islet cells from pancreatic tissue in mice. These islets are notoriously difficult to work with, taking up just only one to two percent of the pancreas, but they’re where the beta cells are located.

The researchers first looked at whether CNOT3 expression differed in diabetic mice compared with non-diabetic mice. By looking at these islets, they found that there was a significant decrease in the CNOT3 in the diabetic islets as opposed to the non-diabetic ones.

To further investigate the protein’s function, the researchers blocked its production in the beta cells of otherwise normal mice. For four weeks, the animals’ metabolism functioned normally, but by the eighth week, they had developed an intolerance to glucose, and by 12 weeks they had full-blown diabetes. 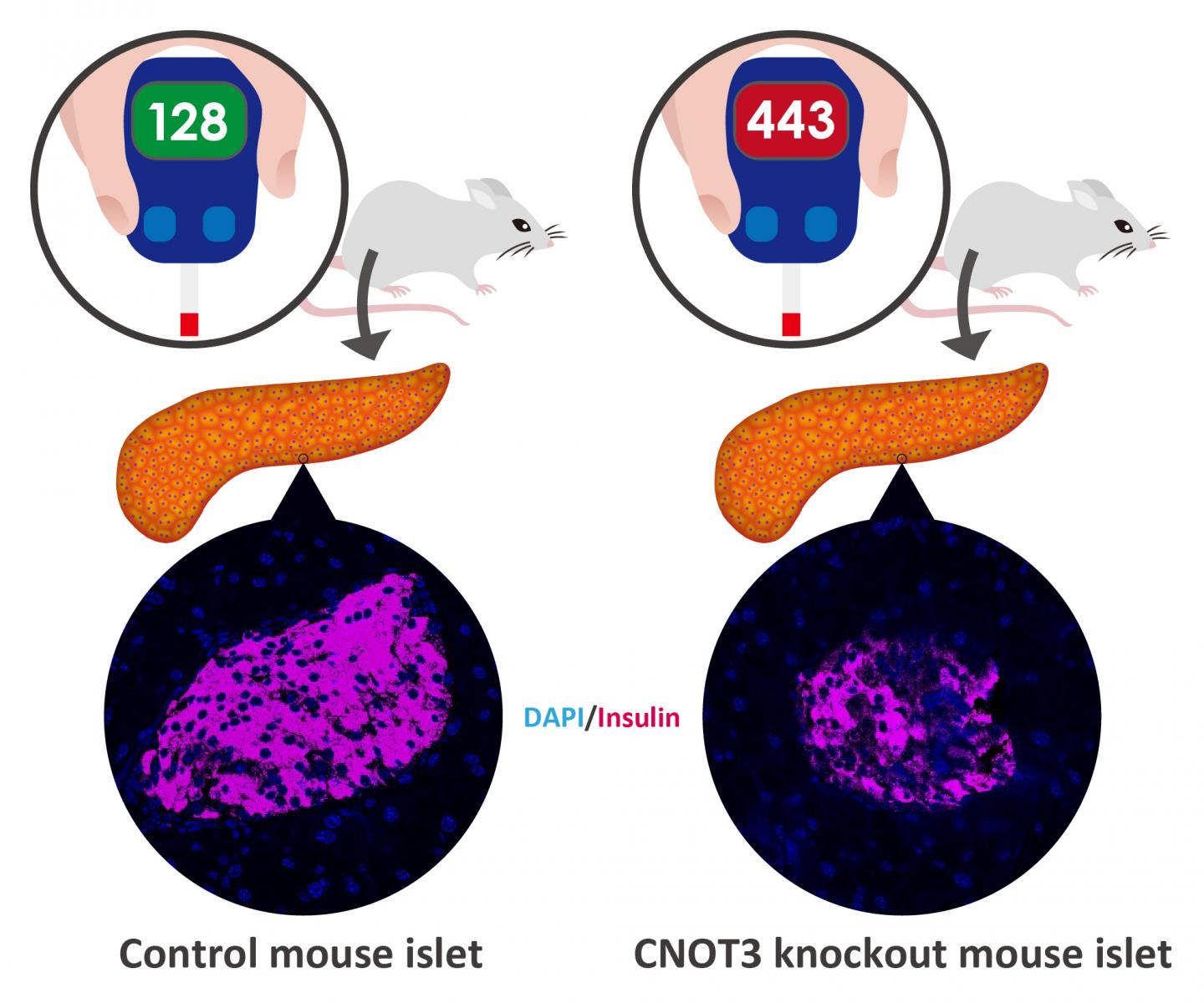 Without CNOT3, the researchers found that some genes, which are normally switched off in beta cells, switch on and start to produce proteins. Under normal circumstances, these genes are silenced because once they switch on, they cause all kinds of problems for the beta cells, such as stopping them from secreting insulin in response to glucose.

“We still don’t know that much about these kinds of genes, such as what their normal function is and the mechanism that’s involved in their silencing,” Dr. Mostafa said. “So, it was very rewarding to find that CNOT3 in an important factor in keeping them switched off.”

Further research into the cellular mechanisms behind this found a surprising link between CNOT3 and the messenger RNA of these normally switched-off genes. A messenger RNA (mRNA) is a single strand molecule that corresponds to the genetic sequence of a gene and is essential for synthesizing proteins.

Under normal circumstances, the mRNA of these genes hardly expresses. But once CNOT3 was removed, the researchers found that the mRNA was much more stable. In fact, protein was produced from the stabilized mRNA, which have unfavorable effects on normal tissue function. This suggests that at least one way that these genes are kept switch off is through the destabilization of their mRNA, driven by CNOT3.

“This study is a step towards understanding the molecular mechanisms that govern normal beta cell function,” Dr. Mostafa said. “Ultimately, it could contribute to new ways of preventing and treating diabetes.”

This article has been republished from the following materials. Note: material may have been edited for length and content. For further information, please contact the cited source.
Advertisement
Chosen for You
Article