Complete the form below to unlock access to this Audio Article: "Psilocybin for Treatment-Resistant Depression"

The findings come from a study in which researchers from Imperial College London used psilocybin – the psychoactive compound that occurs naturally in magic mushrooms – to treat a small number of patients with depression in whom conventional treatment had failed.

In a paper, published in the journal Scientific Reports, the researchers describe patient-reported benefits lasting up to five weeks after treatment, and believe the psychedelic compound may effectively reset the activity of key brain circuits known to play a role in depression.

Comparison of images of patients’ brains before and one day after they received the drug treatment revealed changes in brain activity that were associated with marked and lasting reductions in depressive symptoms. 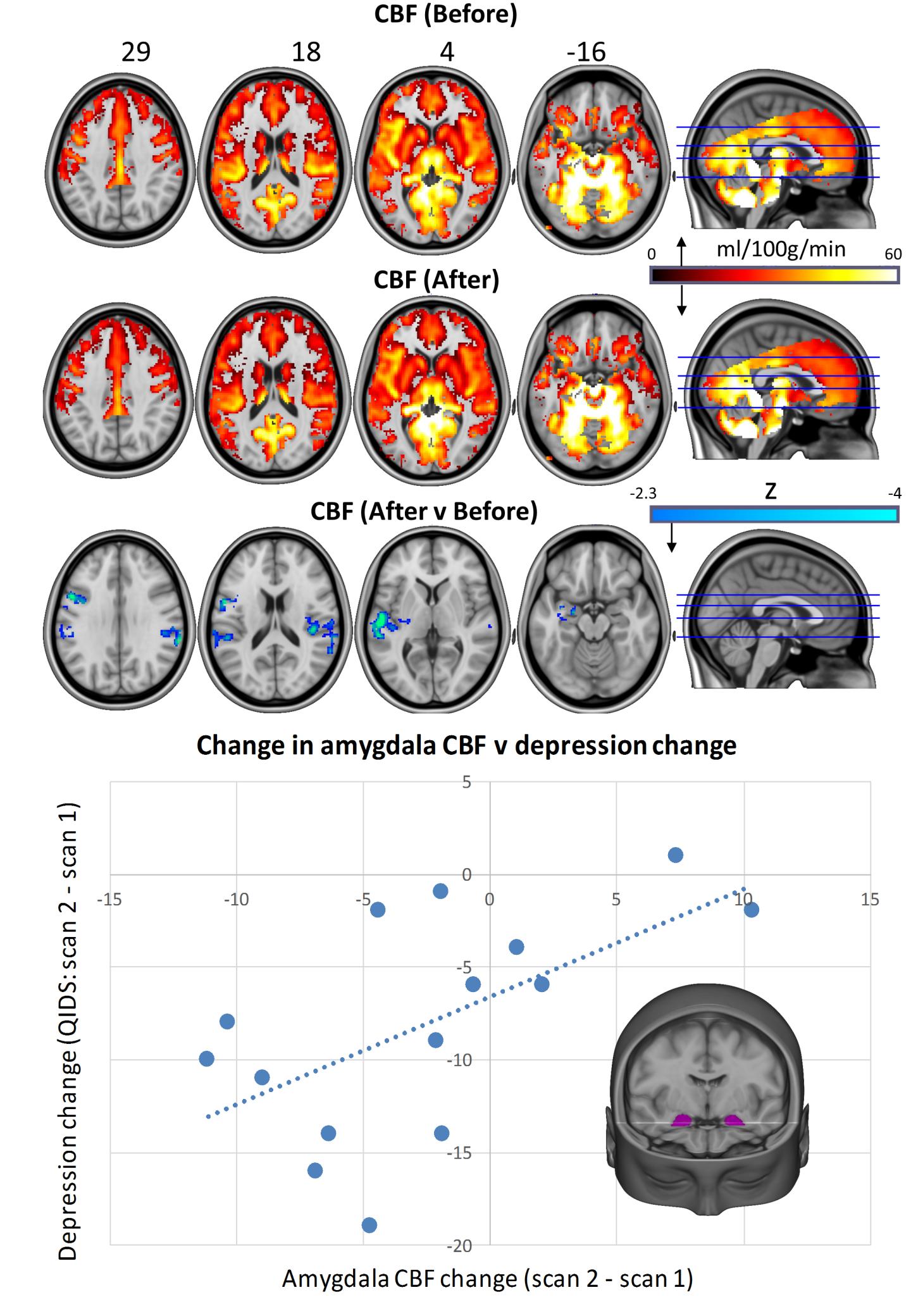 Whole-brain cerebral blood flow maps for baseline versus one-day post-treatment, plus the difference map (cluster-corrected, p < 0.05, n = 16). Correlation chart shows post-Treatment changes in bilateral amygdala CBF versus changes in depressive symptoms (r = 0.59, p = 0.01). One patient failed to complete the scan 2 QIDS-SR16 rating, reducing the sample size to n = 15 for the correlation analysis. In all of the images, the left of the brain is shown on the left. Carhart Harris, R et al. Scientific Reports 2017

The authors note that while the initial results of the experimental therapy are exciting, they are limited by the small sample size as well as the absence of a control group – such as a placebo group – to directly contrast with the patients.

Dr Robin Carhart-Harris, Head of Psychedelic Research at Imperial, who led the study, said: “We have shown for the first time clear changes in brain activity in depressed people treated with psilocybin after failing to respond to conventional treatments.

“Several of our patients described feeling ‘reset’ after the treatment and often used computer analogies. For example, one said he felt like his brain had been ‘defragged’ like a computer hard drive, and another said he felt ‘rebooted’.

"Psilocybin may be giving these individuals the temporary ‘kick start’ they need to break out of their depressive states and these imaging results do tentatively support a ‘reset’ analogy. Similar brain effects to these have been seen with electroconvulsive therapy.”

Exploring the potential of psychedelics

Over the last decade or so, a number of clinical trials have been conducted into the safety and effectiveness of psychedelics in patients with conditions such as depression and addictions, yielding promising results.

In the recent Imperial trial, the first with psilocybin in depression, 20 patients with treatment-resistant form of the disorder were given two doses of psilocybin (10 mg and 25 mg), with the second dose a week after the first. Nineteen of these underwent initial brain imaging and then a second scan one day after the high dose treatment.

Immediately following treatment with psilocybin, patients reported a decrease in depressive symptoms – corresponding with anecdotal reports of an ‘after-glow’ effect characterised by improvements in mood and stress relief.

Functional MRI imaging revealed reduced blood flow in areas of the brain, including the amygdala, a small, almond-shaped region of the brain known to be involved in processing emotional responses, stress and fear. They also found increased stability in another brain network, previously linked to psilocybin’s immediate effects as well as to depression itself.

These findings provide a new window into what happens in the brains of people after they have ‘come down’ from a psychedelic, where an initial disintegration of brain networks during the drug ‘trip’, is followed by a re-integration afterwards.

Dr Carhart-Harris explained: “Through collecting these imaging data we have been able to provide a window into the after effects of psilocybin treatment in the brains of patients with chronic depression.

"Based on what we know from various brain imaging studies with psychedelics, as well as taking heed of what people say about their experiences, it may be that psychedelics do indeed ‘reset’ the brain networks associated with depression, effectively enabling them to be lifted from the depressed state."

The authors warn that while the initial findings are encouraging, the research is at an early stage and that patients with depression should not attempt to self-medicate, as the team provided a special therapeutic context for the drug experience and things may go awry if the extensive psychological component of the treatment is neglected.

They add that future studies will include more robust designs and currently plan to test psilocybin against a leading antidepressant in a trial set to start early next year.

Professor David Nutt, Edmond J. Safra Professor of Neuropsychopharmacology and director of the Neuropsychopharmacology Unit in the Division of Brain Sciences, and senior author of the paper, added: “Larger studies are needed to see if this positive effect can be reproduced in more patients. But these initial findings are exciting and provide another treatment avenue to explore.”

This article has been republished from materials provided by Imperial College London. Note: material may have been edited for length and content. For further information, please contact the cited source.