Puppies’ Ability To Socialize With Humans Is a Heritable Trait

Puppies’ Ability To Socialize With Humans Is a Heritable Trait

Ruairi is a senior science writer at Technology Networks. He holds a Master's degree in clinical neurosciences from the University of Cambridge and has written for Technology Networks since 2018.
Learn about our editorial policies
Credit: Bray et al, 2021.
Read time:

Complete the form below to unlock access to this Audio Article: "Puppies’ Ability To Socialize With Humans Is a Heritable Trait"

Over the last 30,000 years,  the domesticated dog has become man’s best friend. Selective breeding for desired traits has created nearly 200 different breeds of dog, each with their own distinct temperament. One characteristic shared by all dog breeds is an ability to closely socialize, communicate and bond with humans. For years, researchers have wondered to what extent this inter-species social bond is driven by dog genetics, or by their environmental interaction with humans.

To answer this question, some lucky researchers at the University of Arizona conducted a study with 375 8-week-old puppies. Their research is published in the journal Current Biology.

The team, including lead author Dr Emily Bray, a postdoctoral researcher at the Arizona Canine Cognition Center, had their pooch participants, a mix of Labradors, Golden Retrievers or Lab-Golden crosses, conduct a series of behavioral tasks.

In the first task, which assessed how they responded to human social signals, a researcher stood in front of a puppy between two upturned cups. Under one cup lay a treat. The researchers then either pointed at the treat cup, or placed a colored marker beside it, stating the satisfyingly jargon-free phrase: “Puppy, look!”

The puppies’ behavior was then recorded. From the very earliest trials, the puppies, who had minimal interaction with humans prior to this point, were still able to understand from the researcher’s actions that they should investigate the treat-containing cup. Collectively, they were able to find the treat roughly 67% of the time, a level significantly above chance (if the dogs had been choosing a cup at random). When the researchers did not prompt the puppy, success reduced to chance level, showing that the dogs were not just sniffing out the hidden treat.

A third task had the researchers read from a pre-prepared puppy script. Here’s a direct sample from the script: ‘‘Hi pup! Are you a good puppy? Yes, you are. What a good puppy. Aww, look how cute you are. Look at those big eyes and floppy ears…”).

The researchers measured how long the puppies made eye contact with them  during this spiel and then how long they were willing to spend receiving pats when they were allowed to approach the researcher afterwards. In contrast, the dogs paid much less attention to the researchers during a task that did not involve an interaction started by the researcher, the so-called “unsolvable” task. 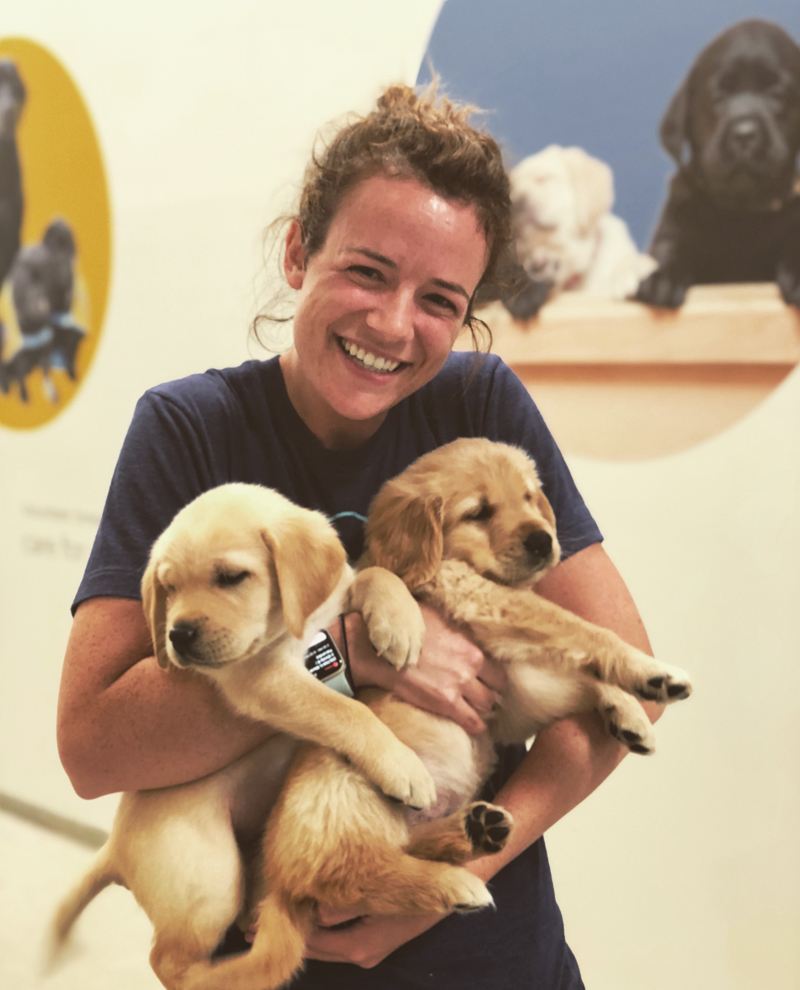 “The 'unsolvable' task is one that has been used to assess problem-solving strategies in adult dogs and wolves — when confronted with an insurmountable obstacle (in this case, accessing food in a locked Tupperware), what is an individual’s go-to strategy?” explained Bray in an interview with Technology Networks.

Wider research has shown that dogs are much more likely to seek help from humans during an "unsolvable" task than more independently minded wolves. Bray explained that young puppies may not have yet learned to seek such help from humans, even if they were already able to respond to interaction initiated by people around them. This finding, she says,  mimics human development: “Human infants are similarly receptive to social communication (e.g., following a point, understanding language) earlier than they can generate it (e.g., producing a point, speaking first words).”

The researchers then used genetic analyses to examine the underpinnings of their behavioral findings. Their cohort of puppies was taken from the Canine Companions for Independence (CCI), the largest non-profit provider of service dogs for people with disabilities in the US. The puppies, all had established pedigrees going back several generations, allowing Bray and colleagues to assess how much of the dogs’ performance in the social tasks varied according to genetics. They found that these social communicative skills were roughly 40% heritable, a statistic thought to be similar to the heritability of human intelligence.

These findings are the first direct evidence that variation in dog social cognition is heritable, a finding, says Bray, that gives clues to how our canine chums evolved under selective breeding: “If similar heritable variation was present in the wolf populations that gave rise to dogs (thousands of years ago), these social communicative skills would have had strong potential to undergo rapid selection.”

Early humans may have highly valued the specific traits in a dog that suggest they would work well alongside their owners, much like the dog breeders of today. Bray says, “Dogs’ communicative skills uniquely position them to fill the niche that they do alongside humans. Many of the tasks that they perform for us, now and in the past (i.e., herding, hunting, detecting and acting as service dogs), are facilitated by their ability to effectively use our cues. Even with just your run-of-the-mill companion dog, these abilities help foster attachment (we know mutual eye gaze increases oxytocin levels in both species) and strengthen the human-animal bond.”

While the research did not aim to tease out all of the mechanisms in puppy brains that allow them to understand human signals so clearly – a question that Bray’s team suggest will be answered in future studies – what is clear is that working with puppies is extremely enjoyable: “The repetition of the exact same tasks hundreds of times should have become monotonous, but instead the puppies’ antics and individual personalities kept us on our toes and made every testing session interesting!” concludes Bray.