Reconstructing the Clock of Human Development

From the first division of a fertilized egg, a complex network of proteins and genes push-and-pull on each other to construct the pattern of cells that form our organs. Like the pendulum on a clock, each swing and pulse needs to carefully align, to maintain the rhythm that forms life.

However, much of our understanding on early human development is exceedingly limited, a key reason being the lack of experimental models that can reproduce these complex biological processes.

"For example, a process called 'somitogenesis' begins about 20 days after fertilization in humans. This is when the embryo develops distinct segments called 'somites' and determines the basic segmented pattern of the body," explains team leader Cantas Alev from Kyoto University's Institute for the Advanced Study of Human Biology, ASHBi. "Somites eventually contribute to the formation of the vertebrae and ribs." 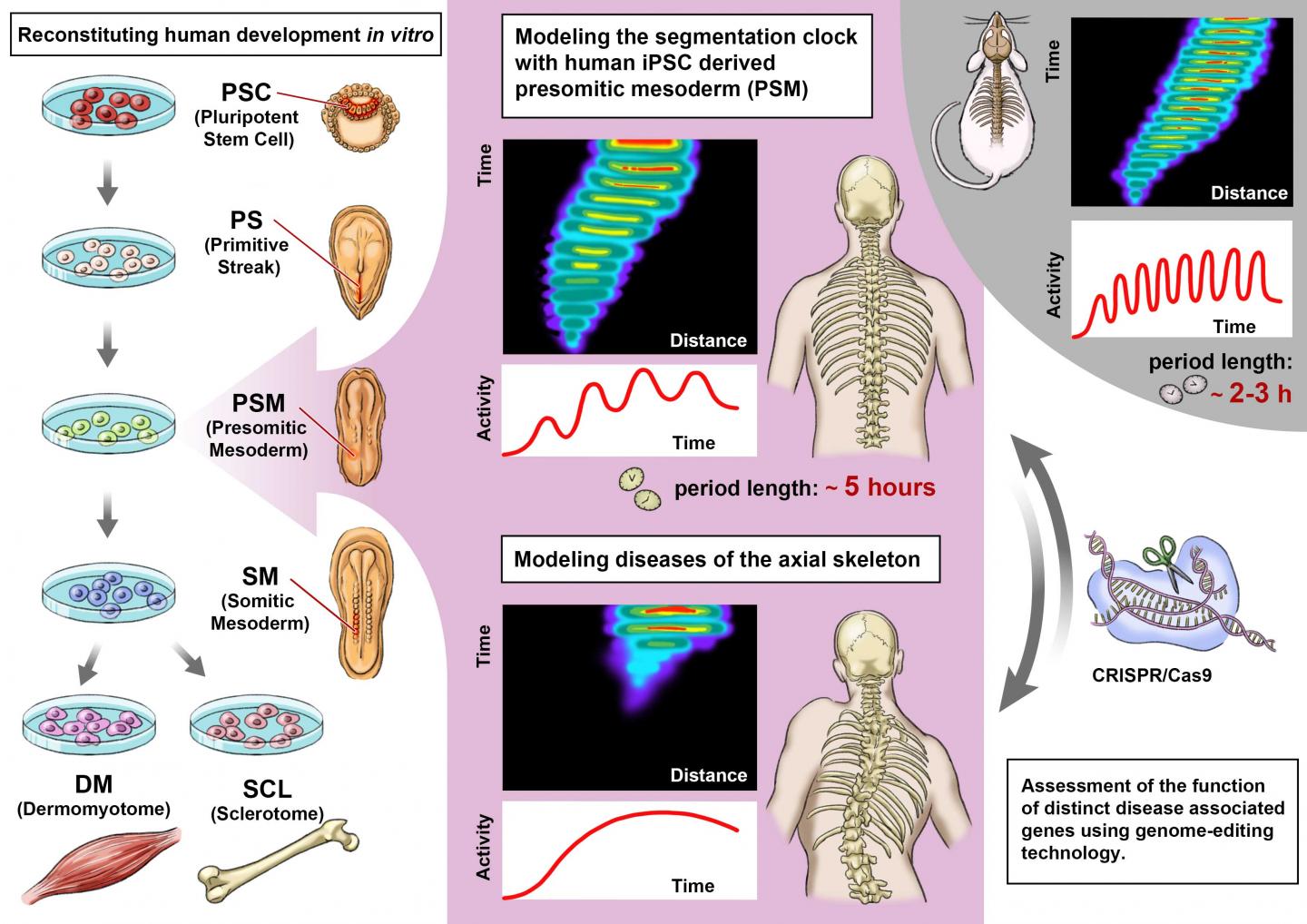 Graphical abstract of the paper on reconstituting the segmentation clock and the role of the PSM (Kyoto University/Misaki Ouchida/Cantas Alev).

Emergence of somites is determined by the 'segmentation clock', a genetic oscillator that controls and guides their emergence. While segmentation clock genes and their role in development have been studied in mice, chicks, and zebrafish, almost nothing is known about them in humans.

A way of addressing this problem is to reconstruct the clock using stem cells. In their paper published in Nature, a team consisting of members from ASHBi, Kyoto University's Center for iPS Cell and Research Application, and RIKEN focused on using human iPS cells to form the 'pre-somitic mesoderm', the precursor cells of somites.

"We began by mimicking the signaling pathways active during early development. Applying our knowledge in embryology, we succeeded in generating a culture of pre-somitic mesoderm, or PSM, along with its progeny," continues Alev. "Studying the genes that were being expressed in a rhythmic pattern showed not only that they oscillated with a period of five hours, but also revealed the novel genetic components of the 'segmentation clock' we were looking for."

In addition to the simple oscillation of genes, the team also replicated a second hallmark of the segmentation clock, a 'wave' of expression. Using gene-editing technology, they then assessed the function of the key genes related to spine deformation.

As expected, mutations in these genes dramatically altered aspects of the segmentation clock including synchronization and oscillation. They then went further by generating iPS cells from patients with aforementioned genetic defects, identified the mutations involved, and corrected them.

The study demonstrates how elegantly iPS cells can be used to recapitulate distinct aspects of human embryonic development and other complex biological processes.

"Like many developmental biologists I am fascinated by embryos and embryonic development. The elegance and beauty by how complex organs and tissues are formed from very simple initial structures is astounding. I hope to reconstruct and analyze many other aspects of embryonic development, and expand our still limited understanding of human and non-human development."

END_OF_DOCUMENT_TOKEN_TO_BE_REPLACED

Researchers have used a large-scale human genetics study to identify drug targets important for managing COVID-19 in its early stages.

END_OF_DOCUMENT_TOKEN_TO_BE_REPLACED

A new paper explains the future ethical implications of research into brain organoids, a laboratory-made structure that is designed to grow and behave like the brain.

END_OF_DOCUMENT_TOKEN_TO_BE_REPLACED

How To Tame "Jumping Genes" in a Genome

END_OF_DOCUMENT_TOKEN_TO_BE_REPLACED

Predicting the Biological Language of Cancer and Alzheimer's Using AI