In new DARPA project, researchers exploit the latest in silicon electronics to invent an implanted brain-interface device that could transform how artificial systems enhance brain functions.

Today, implanted electrode devices for stimulating the brain are extremely crude devices with only a handful of electrodes that are used to mitigate the effects of Parkinson’s, epilepsy, and other neurodegenerative conditions. The number of patients with these devices is merely tens of thousands because of the extreme invasiveness of the implantation process and the large size of the implanted device. The invention of a less invasive implant device with many more channels that can interact with the brain would result in revolutionary improvements to brain-machine interfaces, including direct interfaces to the auditory cortex and the visual cortex,  expanding dramatically the ways in which artificial systems can support brain function.

Thanks to a new four-year $15.8M grant from the U.S. Department of Defense’s Defense Advanced Research Projects Agency (DARPA), Columbia Engineering Professor Ken Shepard, a pioneer in the development of electronics that interface with biological systems, is leading a team to do just that: invent an implanted brain-interface device that could transform the lives of people with neurodegenerative diseases or people who are hearing and visually impaired.

“This topic has drawn lots of interest from the private sector recently, including start-ups Neuralink and Kernel,” says Shepard, who is the Lau Family Professor of Electrical Engineering, and professor of biomedical engineering at Columbia Engineering. “If we are successful, the tiny size and massive scale of this device could provide the opportunity for transformational interfaces to the brain, including direct interfaces to the visual cortex that would allow patients who have lost their sight to discriminate complex patterns at unprecedented resolutions. This is a highly ambitious project for Columbia, indeed for all of us, and we are very excited to address such a challenging issue.” 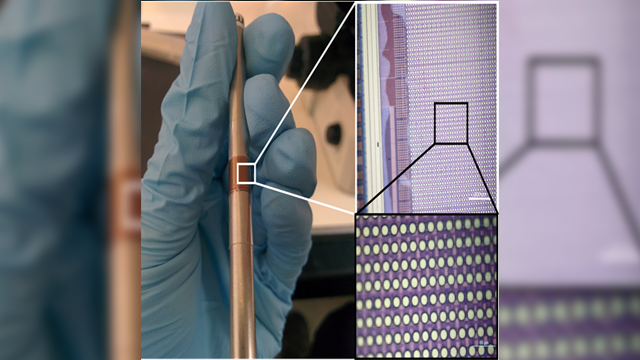 A flexible multielectrode array designed by Shepard and his team. If successful, this noninvasive device could alter the lives of people with hearing and visual impairments and neurodegenerative diseases. -Photo Courtesy of Prof. Ken Sheppard, Columbia University.

Shepard’s project is in DARPA’s Neural Engineering System Design (NESD) program, part of the larger Federal-government-wide BRAIN Initiative. NESD is aimed at developing an implantable neural interface that can provide unprecedented signal resolution and data-transfer bandwidth between the brain and the digital world. Shepard’s team includes researchers from leading institutions such as Baylor College of Medicine, California Institute of Technology, Duke University, New York University, Northwestern, and Medtronic. At Columbia, the project includes Rafael Yuste (professor of biological sciences and neuroscience, Arts & Sciences), Liam Paninski ( professor of statistics and neuroscience, Arts & Sciences, and Zuckerman Institute Principal Investigator), and Luca Carloni (professor of computer science, Engineering). The team is focused on meeting the NESD goals of designing an implantable brain-interface device at the scale of one million channels to enable recording and stimulation from the sensory cortex. In addition, they plan to apply for regulatory approval to begin experiments in humans at the end of the four-year program.

“This is a very aggressive timeline,” Shepard notes. “We think the only way to achieve this is to use an all-electrical approach that involves a massive surface-recording array with more than one million electrodes fabricated as a monolithic device on a single complementary metal-oxide-semiconductor (CMOS) integrated circuit.  We are working with the Taiwan Semiconductor Manufacturing Company as our foundry partner.”

Given the complexity and scale of the interfaces required, Shepard and his team believe that the degree of noninvasiveness required for human use within this aggressive time frame can only be achieved with electrode architectures based on stimulation and recording at the brain surface. While his approach is grounded in current human clinical practice with surface recording arrays, the large scale and requirements of the NESD program require a dramatic departure from prior electrical approaches to brain interfaces. Shepard believes that achieving the requisite scale for NESD is possible only if his team exploits the full capabilities of leading-edge CMOS technology, together with the industry’s associated manufacturing capabilities, and uses monolithic integration of stimulation/recording electrodes with an underlying CMOS electronics platform.

The implanted chips are ultra-conformable to the brain surface, very light, and flexible enough to move with the tissue. The chip does not penetrate the brain tissue and uses wireless powering and data telemetry.  “By using the state-of-the-art in silicon nanoelectronics and applying it in unusual ways, we are hoping to have big impact on brain-computer interfaces,” says Shepard.  “We have assembled a world-class team to translate our efforts to human use at the conclusion of this program.”

This article has been republished from materials provided by Columbia University Dept of Engineering. Note: material may have been edited for length and content. For further information, please contact the cited source.

END_OF_DOCUMENT_TOKEN_TO_BE_REPLACED

Different learning difficulties do not correspond to specific regions of the brain, as previously thought, say researchers at the University of Cambridge. Instead poor connectivity between 'hubs' within the brain is much more strongly related to children's difficulties.

END_OF_DOCUMENT_TOKEN_TO_BE_REPLACED

A Capella Shows How the Brain Processes Speech and Music

A new study suggests that humans have developed complementary neural systems in each hemisphere for auditory stimuli.

END_OF_DOCUMENT_TOKEN_TO_BE_REPLACED

Could This Robot Help Children With Autism Learn?

END_OF_DOCUMENT_TOKEN_TO_BE_REPLACED

An Unexpected Brain Area Is Involved in Decision-making

END_OF_DOCUMENT_TOKEN_TO_BE_REPLACED

The Surprising Social Benefits of Stress

END_OF_DOCUMENT_TOKEN_TO_BE_REPLACED

What Can We Learn From Bee Brains?