Scientists Image the Brains of Stutterers to Find Cause

Scientists Image the Brains of Stutterers to Find Cause

Complete the form below to unlock access to this Audio Article: "Scientists Image the Brains of Stutterers to Find Cause"

“G-g-g-g-g-ood morning” or “One b-b-b-bread, please" are daily obstacles for people who stutter. However, so far, not much is known about the causes of persistent developmental stuttering, which is the most frequent speech disorder. Scientists at the Max Planck Institute for Human Cognitive and Brain Sciences in Leipzig and the University Medical Center Göttingen have recently discovered that a hyperactive network in the right frontal part of the brain plays a crucial role in this deficit. It inhibits speech movement planning and execution, thereby interrupting the flow of speech.

One per cent of adults and five per cent of children are unable to achieve what most of us take for granted—speaking fluently. Instead, they struggle with words, often repeating the beginning of a word, for example “G-g-g-g-g-ood morning” or get stuck with single sounds, such as “Ja” for “January” although they know exactly what they want to say.

What processes in the brain cause people to stutter? Previous studies showed imbalanced activity of the two brain hemispheres in people who stutter compared to fluent speakers: A region in the left frontal brain is hypoactive, whereas the corresponding region in the right hemisphere is hyperactive. However, the cause of this imbalance is unclear. Does the less active left hemisphere reflect a dysfunction and causes the right side to compensate for this failure? Or is it the other way around and the hyperactive right hemisphere suppresses activity in the left hemisphere and is therefore the real cause of stuttering?

Scientists at the Max Planck Institute for Human Cognitive and Brain Sciences (MPI CBS) in Leipzig and at the University Medical Center Göttingen have now gained crucial insights: The hyperactivity in regions of the right hemisphere seems to be central for stuttering: “Parts of the right inferior frontal gyrus (IFG) are particularly active when we stop actions, such as hand or speech movements”, says Nicole Neef, neuroscientist at MPI CBS and first author of the new study. “If this region is overactive, it hinders other brain areas that are involved in the initiation and termination of movements. In people who stutter, the brain regions that are responsible for speech movements are particularly affected.” 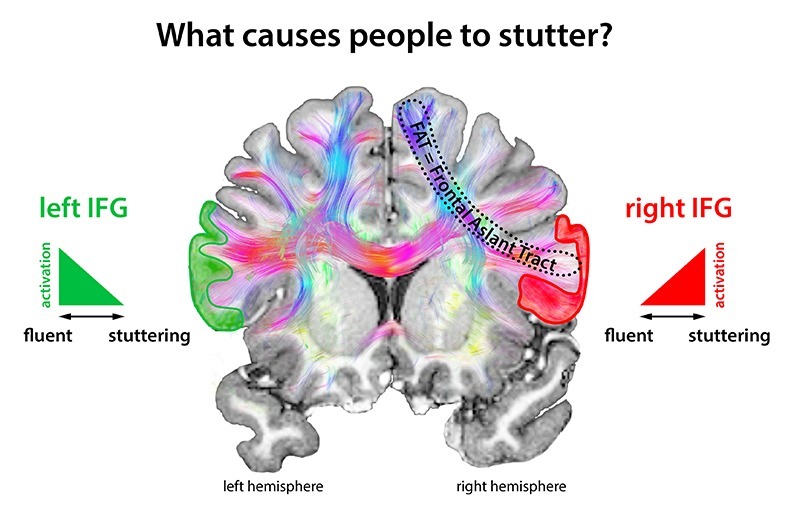 Typically, the right IFG stops the flow of speech, whereas the left one supports it. In people who stutter, these two areas are conversely activated:  The right IFG is overactive and shows tightened connections with the frontal aslant tract (FAT), which is a sign of a strengthened movement inhibition. This interrupts the flow of speech and might inhibit activity in the left IFG. © MPI CBS

Two of these areas are the left inferior frontal gyrus (IFG), which processes the planning of speech movements, and the left motor cortex, which controls the actual speech movements. “If these two processes are sporadically inhibited, the affected person is unable to speak fluently”, explains Neef.

The scientists investigated these relations using Magnetic Resonance Imaging (MRI) in adults who have stuttered since childhood. In the study, the participants imagined themselves saying the names of the months. They used this method of imaginary speaking to ensure that real speech movements did not interfere with the sensitive MRI signals. The neuroscientists were then able to analyse the brain by scanning for modified fibre tracts in the overactive right hemisphere regions in participants who stutter.

Indeed, they found a fibre tract in the hyperactive right network that was much stronger in affected persons than in those without speech disorders. “The stronger the frontal aslant tract (FAT), the more severe the stuttering. From previous studies we know that this fibre tract plays a crucial role in fine-tuning signals that inhibit movements”, the neuroscientist states. “The hyperactivity in this network and its stronger connections could suggest that one cause of stuttering lies in the neural inhibition of speech movements.”

This article has been republished from materials provided by the Max Planck Institute for Human Cognitive and Brain Sciences. Note: material may have been edited for length and content. For further information, please contact the cited source.