“Proteins have never been seen this way before,” said coauthor Jeremy Smith, director of ORNL’s Center for Molecular Biophysics and a Governor’s Chair at the University of Tennessee (UT). “We used considerable computer power to provide a unified conceptual picture of the motions in proteins over a huge range of timescales, from the very shortest lengths of time at which atoms move (picoseconds) right up to the lifetimes of proteins in cells (roughly 1000 seconds). It changes what we think a protein fundamentally is.”

Results obtained by Smith’s UT graduate student, Xiaohu Hu, revealed that the dynamics of single protein molecules are “self-similar” and out of equilibrium over an enormous range of timescales. 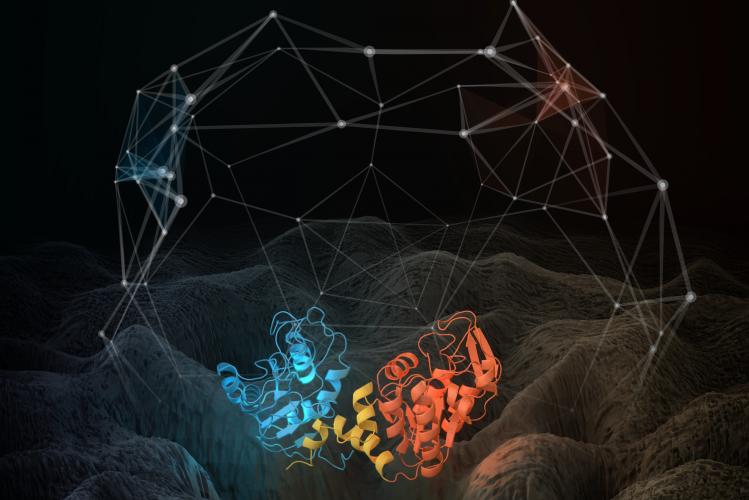 With the help of Titan— the fastest supercomputer in the U.S., located at the DOE Office of Science’s Oak Ridge Leadership Computing Facility—Smith’s team developed a complete picture of protein dynamics, revealing that the structural fluctuations within any two identical protein molecules, even if coded from the same gene, turn out to be different.

“A gene is a code for a protein, producing different copies of the protein that should be the same, but the internal fluctuations of these individual protein molecules may never reach equilibrium, or converge,” Smith said. “This is because the fluctuations themselves are continually aging and don’t have enough time to settle down before the protein molecules are eaten up in the cell and replaced.”

Understanding the out-of-equilibrium phenomenon has biological implications because the function of a protein depends on its motions. Two individual protein molecules, even though they come from the same gene, will not function precisely the same way within the cell.

“You may have, for example, two identical enzyme molecules that catalyze the same reaction,” said Smith. “But due to the absence of equilibrium, the rate at which the catalysis happens will be slightly different for the two proteins. This affects the biological function of the protein.”

“The motions in a protein, how the bits of the protein wiggle and jiggle relative to each other, resemble one another on all these timescales,” Smith said. “We represent the shape of a protein as a point. If it changes its shape due to motions, it goes to a different point, and so on. We joined these points, drawing pictures, and we found that these pictures are the same when you look at them on whatever timescale, whether it’s nanoseconds, microseconds, or milliseconds.”

By building a more complete picture of protein dynamics, the team’s research reveals that motions of a single protein molecule on very fast timescales resemble those that govern the protein’s function.

To complete all of the simulations, the team combined the power of Titan with two other supercomputers—Anton, a specialty parallel computer built by D.E. Shaw Research, and Hopper, the National Energy Research Scientific Computing Center’s Cray XE6 supercomputer located at Lawrence Berkeley National Laboratory.

“Titan was especially useful for us to get accurate statistics,” Smith said. “It allowed us to do a lot of simulations in order to reduce the errors and get more confident results.”