As Parkinson’s disease progresses in patients, a puzzling dichotomy plays out in their brains. One set of neurons degenerates, while a similar population nearby is spared the same degree of damage. Why the difference? An answer to this question could clear the way for preventions and treatments for this disease, which impairs movement.

Using a new strategy they have devised to identify the molecular changes that drive the loss of neurons, researchers at The Rockefeller University and colleagues at Columbia University have identified two proteins they report may be important to Parkinson’s. These two gene-regulating molecules appear to have a protective effect in the set of neurons most affected by the disease, and when their activity wanes, disease sets in. This discovery suggests new avenues by which the disease might be prevented or treated. 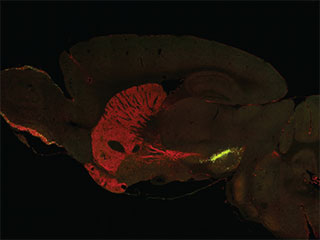 “Within a dying nerve cell, the levels of hundreds of proteins change,” says study author Paul Greengard, Vincent Astor Professor and head of Laboratory of Molecular and Cellular Neuroscience. “Some of these shifts are consequences, others are causes. We set out to find which cause cell death among neurons.”

“Using a new combination of techniques,” Greengard adds, “we identified two of these so-called master regulatory molecules — a discovery that offers an unexpected explanation as to why one population of neurons degenerates in Parkinson’s, while similar neighbors do not suffer from the same degree of degeneration.”

Parkinson’s disease often first shows up as a slight tremor of the hands, and progresses to affect speech, facial muscles, and other movements. This deterioration is caused by the progressive loss of neurons located in a midbrain region called the substantia nigra pars compacta (SNpc). These neurons produce dopamine, a molecule that transmits signals between neurons, and it is the loss of dopamine that causes the loss of motor control associated with Parkinson’s.

Some deterioration also occurs in the dopamine-producing neurons of a neighboring brain region, the ventral tegmental area (VTA), but the VTA neurons are much less affected than those of the SNpc.

Typically, when scientists want to look for molecular changes associated with a condition they use genetic sequencing to create a profile of variations in gene expression. But with conventional profiling approaches it is difficult to pick out the changes that occur in a particular type of cell, and distinguish those that are truly important. It is also very hard to tell which changes arise from the master regulator genes, which can act as control dials turning their target genes up or down.

To overcome these issues, the team led by first author Lars Brichta, a senior research associate in Greengard’s lab, adapted a technique previously developed in Greengard’s and Nathaniel Heintz’s labs, which involves genetically engineering mice to capture the genetic messages being translated into proteins in a specific population of cells. They then mapped the interactions of regulator genes with their target genes in the mouse brain, and used this new tool to interpret the changes they documented between normal mice and those suffering from Parkinson’s-like degeneration.

This led them to two molecules: the proteins SATB1 and ZDHHC2, which are more abundant in the dopaminergic neurons in the SNpc versus the VTA. When the researchers reduced the abundance of these molecules in the brains of normal mice, rapid degeneration like that seen in Parkinson’s disease followed.

“Conventional gene activity profiling approaches would not have been able to identify SATB1 and ZDHHC2 as key protective factors because the levels of these proteins  do not change. But even though they continue to be expressed within the neurons, it appears that their regulatory activity drops off and they no longer stimulate their target genes,” Brichta says. “We later found similar changes in activity in the brains of Parkinson’s patients, particularly those in the early stages.”

Their findings also challenge the prevailing thought as to the molecular origins of Parkinson’s: that VTA neurons had some sort of factor protecting them against the kind of degeneration seen in the SNpc.

“In an unexpected contradiction to current models, the proteins we found protect the SNpc. Because dopamine and its metabolites can be toxic, we can speculate that, in the course of evolution, SATB1 and ZDHHC2 arose to protect this particular set of sensitive neurons from cell death,” Greengard says. “The discovery of these two molecules’ role in Parkinson’s may assist in the development of treatments, because they are potential new targets for drugs.”

The researchers believe their new strategy may also be useful in studies of other neurodegenerative diseases, including Alzheimer’s, spinal muscular atrophy, Huntington’s disease and amyotrophic lateral sclerosis.