Now, researchers at Washington University School of Medicine in St. Louis have identified a compound that targets the APOE protein in the brains of mice and protects against damage induced by the Alzheimer’s protein amyloid beta.

“Scientists have been interested in APOE for years but there are only a few examples where researchers have targeted it with a compound in living animals,” said senior author David Holtzman, MD, the Andrew B. and Gretchen P. Jones Professor and head of the Department of Neurology. “Our findings indicate that APOE is not just involved in Alzheimer’s risk and disease progression, but it could potentially be a real target for treatment or prevention.”

The study is published Dec. 6 in the journal Neuron.

Alzheimer’s, which affects one in 10 people over age 65, is marked by brain plaques made of a sticky protein known as amyloid beta. The plaques start forming in the brains of Alzheimer’s patients years before the characteristic symptoms of memory loss and confusion appear. APOE4 raises the risk of Alzheimer’s partly by encouraging amyloid beta to collect into damaging plaques.

Holtzman, first author and MD/PhD student Tien-Phat Huynh, and colleagues studied mice genetically prone to develop amyloid plaques and that carry the human APOE4 genetic variant. People with APOE4 face up to 12 times the risk of developing Alzheimer’s than the general population. 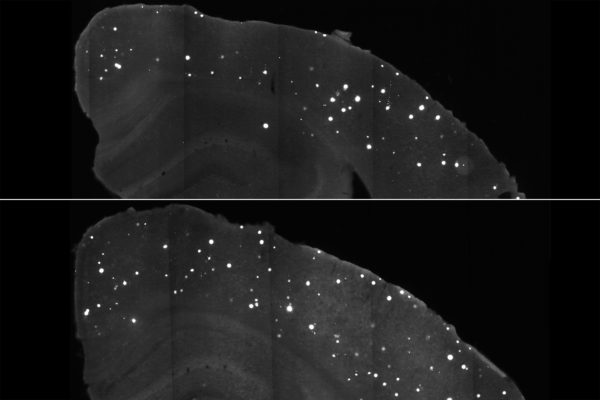 Clumps of a damaging Alzheimer’s protein (white spots) are scarcer in the brains of mice treated with a DNA-based compound (top) as compared with those given a placebo (bottom). The compound targets APOE4, a genetic variant that magnifies a person’s risk of the disease. The findings suggest that targeting APOE could potentially prevent or delay onset of Alzheimer’s. Credit: Tien-Phat Huynh, Washington University School of Medicine in St. Louis.

The researchers targeted the APOE protein using a kind of DNA-based molecule created by co-author Tracy Cole, PhD, and others at Ionis Pharmaceuticals. The molecule – known as an antisense oligonucleotide – interferes with the instructions for building the APOE protein.

The researchers injected the compound into the fluid surrounding the brains of newborn mice. For comparison, they gave other newborn mice either saltwater or a placebo “oligo” that does not interfere with the APOE instructions. Levels of APOE protein dropped by about half in mice given the APOE compound as compared with those that received the placebo oligo or saltwater.

Two months later, the researchers gave the mice a booster dose of the treatment or the saltwater. They examined the mice’s brains at 4 months old. By this time, the brains of such mice normally would be dotted with plaques and show widespread injury.

The mice that received the APOE antisense oligos had about half as many amyloid plaques as mice given saltwater. Each plaque triggered only half as much damage to nearby neurons, an indicator that the compound had prevented some of the neurological damage that leads to Alzheimer’s disease.

While the results are encouraging, more work is needed before the compound could be evaluated in people. Healthy young people with no signs of Alzheimer’s are unlikely to be interested in taking a drug to prevent a disease that may never occur. The researchers therefore tested whether giving the APOE compound after amyloid plaques appear could prevent further changes to the brain. For most people who one day will be diagnosed with Alzheimer’s, plaques start forming in late adulthood. In these genetically modified mice, plaques first appear at about 6 weeks old.

The researchers introduced either the APOE compound or saltwater into the fluid surrounding the brains of 6-week old mice, and then examined the mice’s brains at 4 months old. They found no difference in the number of plaques or the total amount of amyloid beta between the mice that received the compound and those given just saltwater. The compound failed to reduce the amount of amyloid in the mice’s brains.

However, in the mice treated with the APOE compound, each plaque triggered only about half as much damage to the surrounding neurons, suggesting that even a late start could reduce the harm posed by amyloid beta.

“If you wanted to target APOE to affect the amyloid process, the best thing would be to start before the plaques form,” Holtzman said. “But even if you start later, you still may reduce the amount of damage caused by the plaques. Now that we have shown that it is possible to target APOE, we can start figuring out the best way to do it.”

This article has been republished from materials provided by Washington University School of Medicine in St. Louis. Note: material may have been edited for length and content. For further information, please contact the cited source.