Thin Myelin Sheaths are a Marker for Remyelination

Published: October 25, 2017
| Original Story by Terry Devitt for The University of Wisconsin-Madison
News

Thin Myelin Sheaths are a Marker for Remyelination

Complete the form below to unlock access to this Audio Article: "Thin Myelin Sheaths are a Marker for Remyelination"

In the central nervous system of humans and all other mammals, a vital insulating sheath composed of lipids and proteins around nerve fibers helps speed the electrical signals or nerve impulses that direct our bodies to walk, talk, breathe, swallow or perform any routine physical act.

But diseases of the nervous system, including multiple sclerosis (MS) in people, degrade this essential insulation known as myelin, disrupting the flow of information between the brain and the body, impairing movement, dimming vision and blunting the ability to function normally.

And while scientists have long studied myelin and understand its role in disease when it degrades, they have puzzled over how myelin repairs itself naturally and whether the thinned sheaths that are a hallmark of the healing nervous system are adequate for restoring the brain’s circuitry over the long haul. 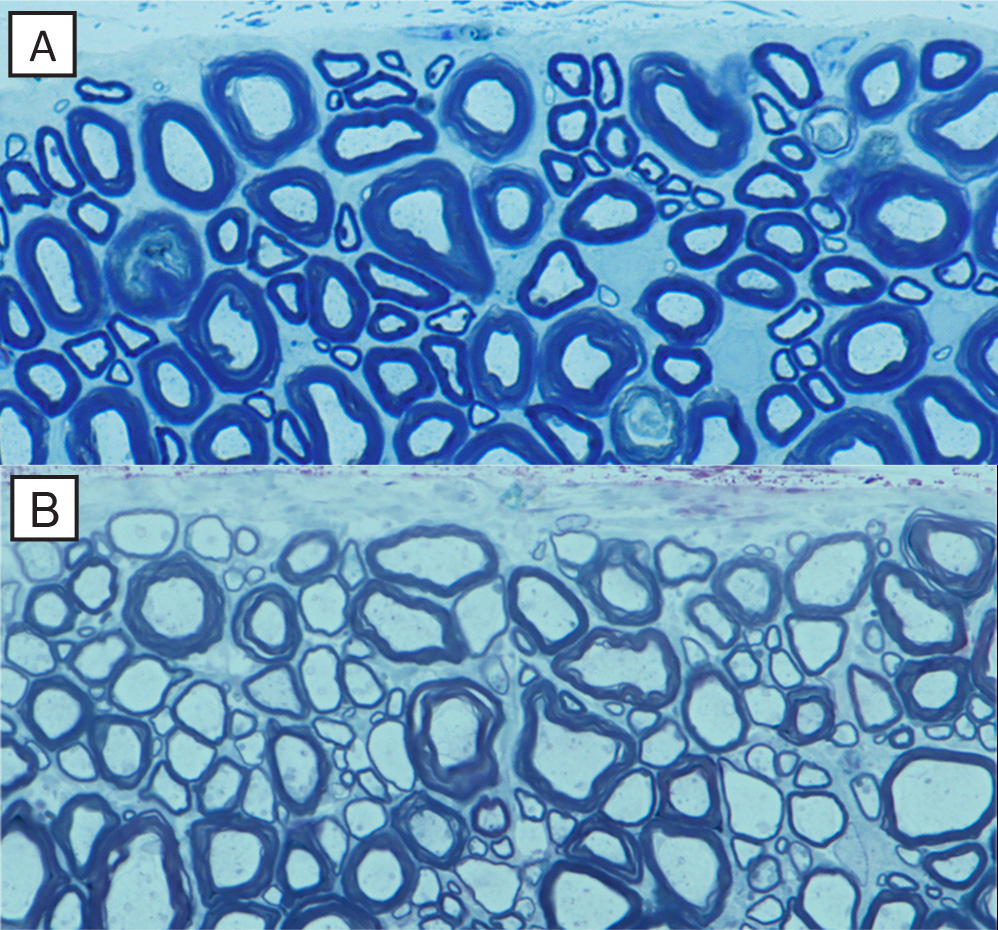 The normal mature dog spinal cord (A) has many axons surrounded by thick myelin sheaths (blue). In contrast, in the recovered 13-year-old dog with the genetic abnormality (B), there are many axons with thin myelin sheaths, identical to that seen in remyelination. Credit: Duncan et al. the University of Wisconsin.

This week (Oct. 23, 2017), in a study published in the Proceedings of the National Academy of Sciences, a team of researchers from the University of Wisconsin–Madison reports that in long-lived animals, renewed but thin myelin sheaths are enough to restore the impaired nervous system and can do so for years after the onset of disease.

The team’s findings reinforce the idea that thin myelin sheaths are a valid, persistent marker of remyelination, a hypothesis challenged by other recent research.  “As the only biomarker of myelin repair available this would leave us without any means of identifying or quantifying myelin repair,” explains Ian Duncan, an expert on demyelinating diseases at the UW–Madison School of Veterinary Medicine and the senior author of the new study.

Duncan and his team looked at a unique genetic disorder that naturally afflicts Weimaraners, a breed of dog that as 12- to 14-day-old pups develop a severe tremor and loss of coordination. The condition is known to occur as the development of the myelin sheath in parts of the dog’s central nervous system is delayed. The symptoms gradually diminish and in most cases disappear altogether by 3-4 months of age.

“This is a very widespread mutation in the breed,” says Duncan, noting that myelin repair mimicking what is seen in remyelination is known to occur in these dogs as the rejuvenated nerve fibers have a thinned myelin sheath.

The new Wisconsin study was made possible as 13 years ago two Weimaraner pups, littermates, were seen as patients at the School of Veterinary Medicine and Duncan was able to maintain contact with the owners after the dogs were adopted and retrieve samples of spinal tissue after the dogs lived out their lives. As they aged, the dogs exhibited few signs of tremor and were deemed ‘neurologically normal’ up to 13 years of age.

The purpose of the study, says Duncan, was to confirm that thin myelin sheaths persisted and supported normal neurologic function.

To expand on the results, Duncan also looked at a condition in cats, another long-lived species that has been shown to fully recover nervous system function after demyelination. In particular, Duncan’s team was interested in remyelination of the optic nerves.

That element of the study, looking at remyelination two years after the onset of the condition, Duncan notes, is an example of “true demyelination and remyelination. We found that nearly every optic nerve fiber was remyelinated with a thin myelin sheath, which is important for understanding human disease because in multiple sclerosis, the optic nerve is often the first to be demyelinated.”

The new findings confirm that the gold standard for evaluating remyelination is the long-term persistence of thin myelin sheaths, which support nerve fiber function and survival, Duncan notes. The results are important for diseases like MS as it means that new therapies designed to promote myelin repair can be safely evaluated and quantified based on the presence of thin myelin sheaths.

This article has been republished from materials provided by The University of Wisconsin-Madison. Note: material may have been edited for length and content. For further information, please contact the cited source.