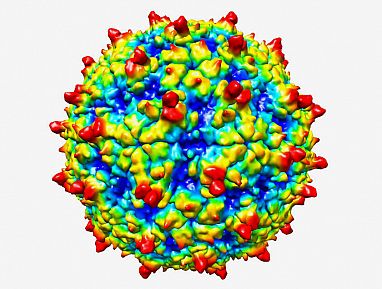 Rhinovirus C, along with rhinoviruses A and B, is a leading cause of common colds. These viruses can also cause severe respiratory infections in infants and young children, and cause serious illness for those with asthma and other chronic respiratory conditions.

Scientists have tried unsuccessfully for years to develop treatments for rhinoviruses. Viruses work by binding to and infecting cells and then using the host cell’s machinery to make more viruses (replicate) and become infectious. Thus it’s important to identify the receptors on human cells that these viruses bind.

A team led by Dr. Ann Palmenberg at the University of Wisconsin–Madison and Dr. Michael Rossmann at Purdue University has been working to understand the structure of rhinovirus C, which is a type of enterovirus. Such studies have been hampered by the difficulty of growing the viruses in the laboratory.

The researchers previously found that rhinovirus C infects cells via a specific surface receptor called cadherin-related protein 3 (CDHR3). In order to grow enough virus for structural analysis, the group engineered cells to have CDHR3. They then infected the cells with a type of rhinovirus C that was adapted for tissue culture. The research was supported by NIH’s National Institute of Allergy and Infectious Diseases (NIAID). Results appeared online in Proceedings of the National Academy of Sciences on July 13, 2016.

Using the imaging technique of cryo-electron microscopy, the team examined the structure of the viral particles and observed 2 forms. Full particles contained key proteins and were infectious. Empty particles (about 30% of all particles) didn’t contain genetic material and weren’t able to infect cells.

The empty particles may simply be byproducts of how the virus is assembled. Alternatively, the researchers suggest, the empty particles could be immune decoys. “No other rhinoviruses seem to do this naturally,” Palmenberg says.

The group created 3-D structures of the full and empty particles at resolutions of 2.8 Å and 3.2 Å, respectively. They found that the outer surface of the full viral particle has 60 spike-like protrusions, or “fingers.” Other enteroviruses have smoother, spherical surfaces. These fingers might play a role in triggering immune responses. Empty particles contain fingers as well. Next to each finger is a depression, which may be where the virus surface binds with the host cell. These findings offer insights for the development of vaccines or drugs to prevent or treat infections.

The scientists also found that rhinovirus C has pocket-like structures that, unlike other enteroviruses, are collapsed and partially filled. This may explain why rhinovirus C is resistant to anti-viral drugs designed to fit in the pocket.

“Rhinovirus C has been the ‘missing link’ in explaining illness caused by the common cold,” Rossmann says. “This is sure to spark major new efforts toward the development of vaccines and antiviral drugs, particularly for the prevention of asthma.”