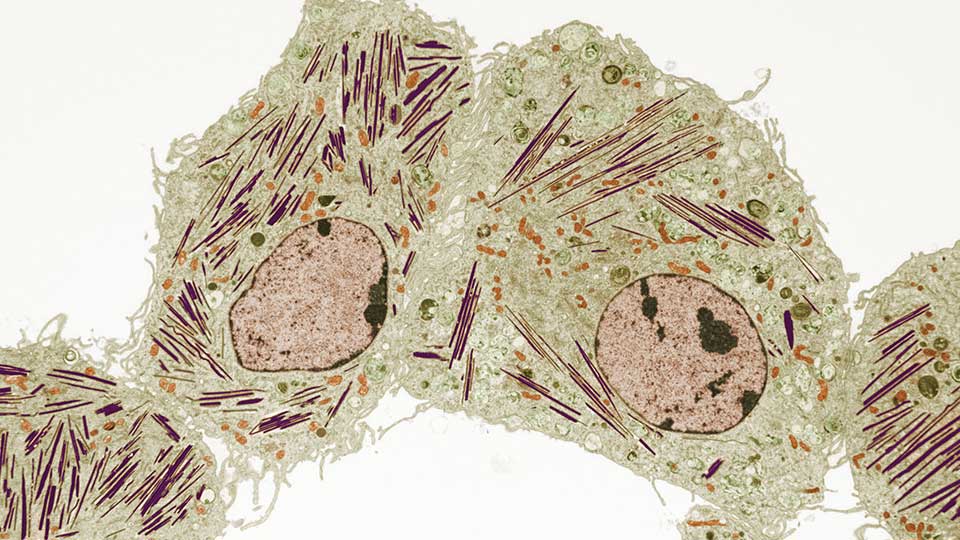 Experiments designed to reveal how a protein protects the lungs from asthma-related damage suggest a new way to treat a rare disease marked by the inability of cells to break down fats, per a report in EBioMedicine published online October 25.

The study results address Gaucher’s disease, which is caused by a genetic glitch in lysosomes. Found mostly in Jews of Eastern and Central European origin, the condition may come with joint pain, blood disorders, enlarged spleens and livers, memory loss, and lung damage.

At a cellular level, Gaucher’s disease is associated with abnormally low production of the protein progranulin, as well as with the misplaced buildup of the enzyme beta-glucocerebrosidase, or GBA, outside lysosomes, instead of inside where it is needed.

Led by researchers from NYU Langone Medical Center, the study found that a manufactured version of progranulin reversed most effects of Gaucher’s disease in mouse and human cell studies, including GBA accumulation.

“Our results suggest a new way to treat Gaucher’s disease that corrects abnormal enzyme delivery by progranulin to lysosomes, as opposed to current treatment strategies that temporarily replenish lysosomal GBA stores, which are then steadily consumed,” says senior study investigator Chuanju Liu, PhD, a professor in the departments of Orthopaedic Surgery and Cell Biology at NYU Langone. The research team and NYU Langone hold a patent on related, potential therapies.

Among the study’s other key findings was that progranulin must bind to other molecules to transport the enzyme to lysosomes, specifically the protective “heat shock” protein 70. If unshielded, cellular GBA molecules fold up and stick together outside lysosomes.

Researchers also found that adding synthetic progranulin, or Pcgin, to blood cells obtained from patients with Gaucher’s, led to a 40 percent reduction in GBA clumping within a week. Pcgin was used because it is chemically more stable than progranulin and poses no risk of uncontrolled tumor-like cell growth in test animals, say the authors.

“Our new experiments are the first to explain why reduced progranulin is a key characteristic of Gaucher’s, and why the mice engineered to lack the protein serve as such a good model to test new therapies,” says lead study investigator Jian Jinlong, MD, PhD, an associate research scientist at NYU Langone.

According to Liu, further research is needed to determine the precise mechanism by which progranulin reduces cell swelling, a process that would likely yield even more drug targets for Gaucher’s disease.