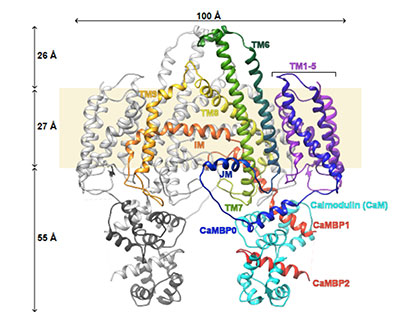 Using a new, lightning-fast camera paired with an electron microscope, University of Maryland School of Medicine scientists have captured images of one of the smallest human proteins to be “seen” with a microscope.

The protein – called STRA6 – sits in the membrane of our cells and is responsible for transporting vitamin A into the cell interior. Vitamin A is essential to all mammals and is particularly important in making the light receptors in our eyes, and in the placenta and fetus where it’s critical for normal development.

“Being able to visualize this protein, and understand how it works to move Vitamin A, is a really fantastic leap,” said one of the paper’s co-authors, David J. Weber, PhD, professor of biochemistry and molecular biology at the University of Maryland School of Medicine (UM SOM). “And there is so much more we can do with this technique. It’s exciting.”

Images of the protein, which revealed several unusual features, were published in the August 26 issue of the journal Science. The work is a collaboration among several scientists around the country. Structural biologist Filippo Mancia, PhD, assistant professor of physiology and cellular biophysics at Columbia University Medical Center, led a team of other scientists, including Dr. Weber of UM SOM, along with Wayne Hendrickson, Larry Shapiro, Joachim Frank and Bill Blaner at Columbia University Medical Center, Loredana Quadro at Rutgers University, and Chiara Manzini at George Washington University.

Until the new study, the way STRA6 transports vitamin A into the cell had been a mystery. Unlike most transporters, which interact directly with the substances they transport, STRA6 uses an intermediary protein that carries vitamin A in the bloodstream. Revealing the structure of STRA6 may provide insight into how other, related transporters work.

A new type of camera technology was a key element to getting the STRA6 images. When paired with an electron microscope, the camera allows biologists to see tiny, never-seen-before structural details of the inner machinery of our cells.

“We can now get near atomic resolution because the new camera is much faster and allows us to take a movie of the molecules,” says Oliver Clarke, PhD, an associate research scientist in the Hendrickson lab at Columbia University Medical Center. “Even under the electron microscope, the molecules are moving around by a tiny amount, but when you take a picture of something moving, it comes out blurry. With such a movie, we can align the frames of the movie to generate a sharper image.”

The researchers used approximately 70,000 individual pictures of STRA6 to generate a 3-dimensional map of the protein, which was used to construct an extremely accurate atomic model. The images and model reveal that STRA6 is “a bit of a freak,” says Dr. Clarke.

Though this needs to be verified, the mechanism may be a way to protect cells from too much vitamin A. “Vitamin A is actually somewhat toxic,” says Dr. Mancia. “Trapping vitamin A inside the membrane may keep control of the amount inside the cell.” The research may help researchers understand how other, still mysterious cellular components, work.