Watch How RNA Switches “On” and “Off”

Watch How RNA Switches “On” and “Off”

Similar to a light switch, RNA switches (called riboswitches) determine which genes turn “on” and “off.” Although this may seem like a simple process, the inner workings of these switches have confounded biologists for decades.

Now researchers led by Northwestern University and the University at Albany discovered one part of RNA smoothly invades and displaces another part of the same RNA, enabling the structure to rapidly and dramatically change shape. Called “strand displacement,” this mechanism appears to switch genetic expression from “on” to “off.”

Using a simulation they launched last year, the researchers made this discovery by watching a slow-motion simulation of a riboswitch up close and in action. Affectionately called R2D2 (short for “reconstructing RNA dynamics from data”), the new simulation models RNA in three dimensions as it binds to a compound, communicates along its length and folds to turn a gene “on” or “off.” 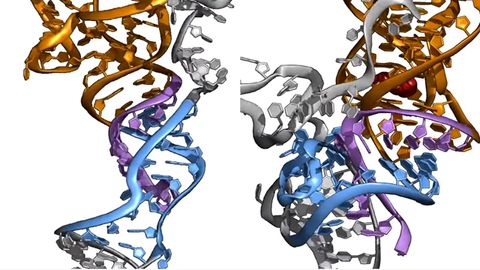 RNA Switching "On" and "Off"

END_OF_DOCUMENT_TOKEN_TO_BE_REPLACED

The findings could have potential implications for engineering new RNA-based diagnostics and for designing successful drugs to target RNA to treat illness and disease.

The research is described in a new paper published today (March 28) in the journal Nucleic Acids Research (NAR), which has designated the study as a “Breakthrough Article.” NAR reserves “Breakthrough Article” status for the most high-impact studies answering long-standing questions in nucleic acids research.

“We have found this strand displacement mechanism occurring in other types of RNA molecules, indicating this might be a potential generality of RNA folding,” said Northwestern’s Julius B. Lucks, who co-led the study. “We are starting to find similarities among different types of RNA molecules, which could eventually lead to RNA design rules for folding and function.”

Lucks is a professor of chemical and biological engineering in Northwestern’s McCormick School of Engineering and a member of the Center for Synthetic Biology and of the Chemistry of Life Processes Institute. He co-led the study with Alan Chen, an associate professor of chemistry at the University at Albany in New York.

Although RNA folding takes place in the human body more than 10 quadrillion times per second — every time a gene is expressed in a cell — researchers know very little about the process. To help visualize and understand the mysterious yet crucial process, Lucks and Chen unveiled R2D2 last year, in a paper published in the journal Molecular Cell.

Employing a technology platform developed in Lucks’ lab, R2D2 captures data related to RNA folding as the RNA is being made. Then, it uses computational tools to mine and organize the data, revealing points where the RNA folds and what happens after it folds. Angela Yu, a former student of Lucks, inputted this data into computer models to generate accurate videos of the folding process.

“What’s so groundbreaking about the R2D2 approach…is that it combines experimental data on RNA folding at the nucleotide level with predictive algorithms at the atomic level to simulate RNA folding in ultra-slow motion,” said Dr. Francis Collins, director of the National Institutes of Health, in his February 2021 blog. “While other computer simulations have been available for decades, they have lacked much-needed experimental data of this complex folding process to confirm their mathematical modeling.”

While Lucks and Chen’s previous simulations visualized the folding of an ancient RNA called SRP, the new movies model a riboswitch from Bacillus subtilis, a common bacterium found in soil.

Riboswitches have two basic parts. One part binds to a compound. Then, depending on how the compound is bound, the second part causes the RNA to fold into a shape that allows it to control gene expression. While these two parts are intertwined and overlapping in many riboswitches, the Bacillus subtilis is different.

“What’s strange is that they are separated by a long distance, but the bound molecule can cause large functional changes,” Lucks said. “If the chemical binds at one end, then how is that communicated downstream to the other end of the RNA? It’s been a mystery.”

Lucks, Chen and their teams found the riboswitch likely communicates downstream through the strand displacement mechanism. In response to the chemical binding, the strand exchange process triggers structural switching between “on” and “off” states.

With this new understanding, Lucks believes the stage is set for optimizing the riboswitch to perform useful tasks. The switch could be used for synthetic biology-based diagnostics, for example — engineered to turn “on” in the presence of an environmental contaminant. By studying this riboswitch, researchers also will learn lessons that could lead to new approaches to create RNA-targeted drugs or new classes of antibiotics.

“Many diseases are likely caused by something going awry at the RNA level,” Lucks said. “The more we know about this, the better we can design RNA targeting drugs and RNA therapeutics.”