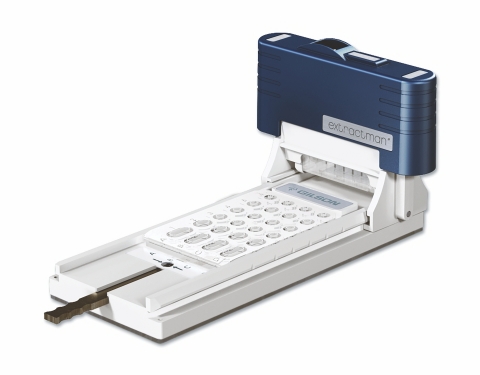 Gilson has announced the launch of EXTRACTMAN®, an innovative biomolecule extraction platform that enables researchers to better study complex protein interactions that are critical for drug target identification and a wide variety of topics in proteomic research. EXTRACTMAN® is ideal for protein interaction studies because it can isolate weak interactors and transiently bound complexes that traditional isolation techniques leave behind. These weak interactors represent potentially unseen targets that are integral to fully understanding protein functions, molecular mechanisms, post-translational modifications and cell signaling cascades.

Protein isolation using EXTRACTMAN® can be performed in significantly less time compared to more traditional tube-based magnetic bead procedures, with up to four samples isolated in parallel in as little as 30 seconds. The EXTRACTMAN® protocol is also ideal for capturing weakly bound protein-protein and cell-protein complexes because they are not exposed to the high shear forces generated by multiple pipet-based wash steps and require less time in pro-dissociating wash buffers.

EXTRACTMAN® leverages Exclusion-based Sample Preparation™ (ESP™) technology developed by Salus Discovery. ESP™ technologies replace the multiple wash and transfer pipetting steps of current paramagnetic bead separation products with a single pass of the magnetic slide of the EXTRACTMAN®device. After paramagnetic beads are allowed to bind the target protein in a sample, an upper magnet captures the beads. They are then moved through a series of wash wells on the single-use bead capture strips. A second, lower magnet can temporarily disengage the upper magnet, allowing beads to gently move through each wash solution. Ultimately, the paramagnetic beads are collected in a final elution well. The innovative design and setup of the single-use bead capture strips and microplates prevent carryover and cross-contamination as the paramagnetic beads are processed.

EXTRACTMAN® uses many commercially available paramagnetic beads, making it easy to adapt existing protocols. EXTRACTMAN® allows for up to four protein isolations to be run in parallel for even more speed and sample preparation consistency, and can be adapted to multiple wash steps.