T cell lymphocytes play a critical role in cell-mediated processes that underlie adaptive immunity. When T-cell receptors (TCRs) found on naïve T cells recognize their specific antigen bound to major histocompatibility complex (MHC) class I proteins, they mature and proliferate into a specialized subset of T cell types that perform key immune functions. In this article, we focus on CD8+ T cells by characterizing their immunological phenotypes and the processes behind their cell-mediated immune functions.

MHC class I vs MHC class II: what’s the difference?
The major histocompatibility complex (MHC) is a region of DNA that contains a number of genes coding for glycoprotein molecules essential to immune system recognition of foreign material.

There are two major classes of MHC molecules. There are key differences between them.
MHC class I molecules are expressed on the surface of all nucleated cells in an organism. They have an essential role in the presentation of “self” intracellular antigens. When cells become infected by intracellular pathogens, such as viruses, MHC class I proteins bind and display protein fragments of the target pathogen on the cell surface to indicate to other components of the immune system that the cell needs to be destroyed.
MHC class II molecules are only expressed by a subset of immune cells called antigen-presenting cells. MHC class II recognition is essential for initiation of adaptive immune response, through signaling to lymphocytes such as the CD4+ helper T cell.
In the thymus, successful binding between a naïve CD8+ T cell and an antigen-presenting cell (APC) stimulates the immature T cell to become an activated CD8+ T cell with cytotoxic functionality. With cytotoxic capabilities like the killing of intracellular pathogens and tumor cells, CTLs belong to a group of specialized lymphocytes involved in cell-mediated adaptive immunity.1 While CTLs are essential for a functional immune system, the dysregulation of CTLs can lead to the pathogenesis of organ-specific autoimmune diseases2 like diabetes or arthritis.

Where do CD8+ T cells originate?

All T cells originate from lymphoid progenitor cells that migrate from bone marrow to the thymus. The thymus houses immature T cells that have yet to develop T-cell receptors required for antigen recognition. During an infection, naïve CD8+ T cells are initially stimulated by interacting with APCs within lymphoid organs.

Once immature T cells migrate to the thymus, they are ready to develop into CD8+ cells. Progenitor T cell lymphocytes first undergo numerous DNA rearrangements that produce a diversity of TCRs capable of recognizing antigens from foreign or intracellular pathogens. TCR diversity is dependent on the number of random DNA rearrangements of TCR genes that lead to the expression of unique, antigen-specific receptors. Once TCRs like CD8 are determined to be functionally stable, immature T cells are ready to undergo an antigen-mediated process called clonal selection.

Positive selection begins when TCRs bind to antigen in complex with MHC class I proteins presented by thymic cells. If this binding event is successful for CD8, the newly activated CD8+ T cells will continue differentiation into mature CTLs. Immature T cells unable to adequately bind to the antigen-MHC class I complex at this stage will undergo apoptosis. Negative selection occurs when immature T cells bind too strongly to self-antigens. Negatively selected T cells are programmed to undergo apoptosis, which eliminates their ability to become autoreactive against healthy cells.

What do cytotoxic T cells do?

Once CD8+ T cells are activated, they undergo a cascade of replication and differentiation steps that primes them for a targeted immune response. CTLs that come into physical contact with targeted infected or malignant cells induce apoptosis, a form of programmed cell death carried out by cytotoxic enzymes and molecules. 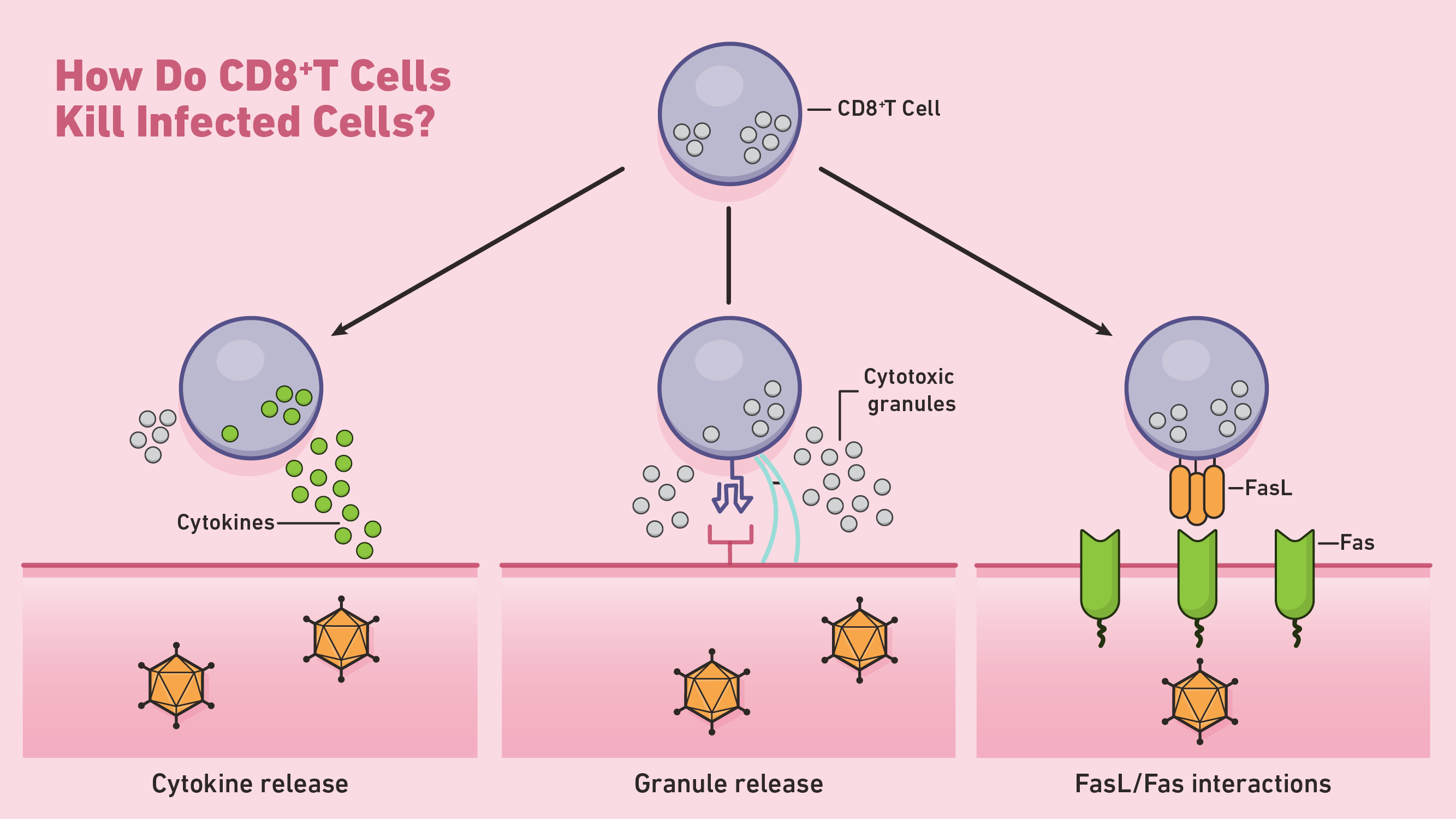 One way in which CD8+ T cells initiate apoptosis is through the secretion of perforin and granzymes, two types of cytotoxic proteins. Perforins are cytolytic proteins that form pores in the cell membrane of targeted cells. CTLs use these pores to direct the release of granzymes, a class of serine proteases that continue the process of apoptosis within the cytosol. These proteases shut down target cells by cleaving viral and cellular proteins involved in normal cell maintenance. Targeted cells undergoing apoptosis are then cleared away by nearby phagocytes.

CTLs can also induce apoptosis through Fas-Fas ligand interactions. Whenever Fas ligand (FasL) binds to the Fas receptor on targeted cells, a series of signaling molecules initiate apoptosis through the activation of caspase proteases. These caspases carry out the bulk of proteolysis throughout the latter stages of apoptosis.

In addition to directed apoptosis, CD8+ T cells can kill target cells indirectly through the release of cytokine factors like TNF-α. For example, type 1 CD8+ T cells (Tc1) can release IFN-γ, a cytokine capable of inhibiting viral replication and enhancing the presentation of specific antigen.4 At the end of their primary response, activated CD8+ T cells typically die by apoptosis.

Naïve CD8+ T cells that differentiate into effector or memory cell types perform specific roles that mediate adaptive immune responses. T cells induced to become effector cells differentiate into Tc1 or Tc2 cells. Tc1 cells acquire the ability to kill targeted cells directly or indirectly once they become stimulated by cytokines such as IL-2 and IL-12. Additionally, cytotoxic Tc1 cells can release IFN-γ or TNF-α to further modulate the host immune response. Tc2 T cells modulate effector and helper immune responses through the secretion of cytokines IL-4, IL-5, IL-10 and IL-13. While Tc2 cells are equipped to perform cytotoxic functions, this subset of T cells is generally not as effective as its Tc1 counterpart during an infection. In addition to the these well-characterized subtypes, new subtypes such as Tc9, Tc17 and Tc22 have been identified in recent years, each induced by and producing different cytokines (Figure 2). 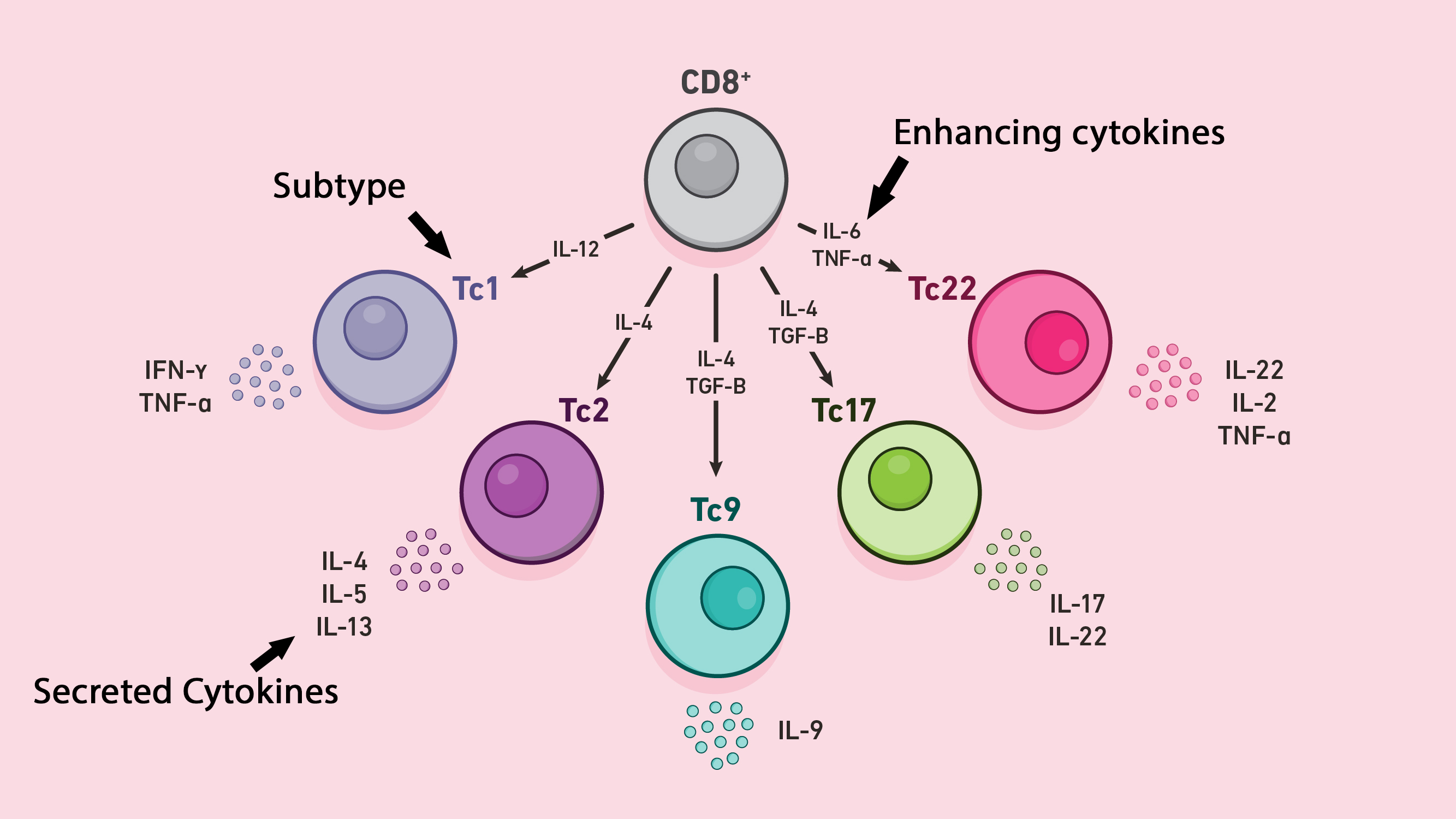 Memory CD8+ T cells are generally identified after a contraction of the effector cell population occurs. Certain effector cells remain after this contraction, and become memory cells. The memory subset of CD8+ T cells can be categorized into three distinct groups: central memory cells, effector memory cells and tissue-resident memory cells. They are thought to be largely derived from the Tc1 subset1. These subsets are characterized by differences in their function, capacity to proliferate and location. Central memory cells (Tcm) are lymphoid-residing lymphocytes that typically respond to secondary infections through rapid proliferation. In humans, Tcm cells are phenotypically characterized by their co-expression of surface markers CD127, CD27 and CD28. Effector memory cells (Tem) circulate throughout the body ready to seek and kill antigen-matching target cells. Unlike their Tcm counterparts, these effector memory cells do not exhibit a robust ability to proliferate or self-renew in response to an infection. Lastly, tissue-resident memory cells (Trm) are mature CTLs that “standby” for secondary infections at the original site of injury or invasion.

CD4+ lymphocytes are a group of “helper” T cells that mediate other immune cell activity through direct and indirect mechanisms. Naïve CD4+ T cells reside in the thymus until they are stimulated by APCs expressing MHC class II proteins to which their target antigen is bound. The successful binding of this protein complex activates CD4+ T cells to begin their differentiation into a helper cell type. Even though activated CD4+ T cells do not perform cytotoxic functions like CD8+ T cells, they mature into helper T cell types that can mediate humoral or cell-mediated immune responses through the secretion of cytokines.5

Where do CD8+ T cells fit into the broader immune response?

CD8+ T-cell regulation depends on a collection of stimulatory and inhibitory mechanisms mediated by TCRs. When CD8+ T cells are presented with their specific antigen, they undergo numerous clonal expansions that produce differentiated cell types required for an adaptive immune response. Independent of antigen presentation through TCRs, CD8+ T cells can indirectly attack pathogens or tumorous cells through the secretion of cytokines.6 However, unregulated CTL activity can contributes to autoimmune responses against healthy cells. A greater understanding of CD8+ T-cell processes in such cases could enhance our abilities to design effective vaccines or to manipulate cell-mediated immune responses in real time.

Jonathan Dornell, PhD
More from this author >
Advertisement
Chosen for you
eBook