Cancer has been described as a complex adaptive system1 and can be viewed through many lenses, including cancer epigenetics (e.g., DNA methylation, histone modifications, chromatin modeling, and microRNA,2), cancer metabolism (e.g., how nutrient availability affects tumorigenesis3 and tumor immunology (e.g., the involvement of different immune cells at different stages of tumor progression).4

To provide a conceptual framework of cancer cell biology, Hanahan and Weinberg published “The Hallmarks of Cancer” in 2000,5 with subsequent updates published in 2011,6  and again in 2022 by Hanahan: Hallmarks of Cancer: New Dimensions.7 In the original Hallmarks of Cancer publication, Hanahan and Weinberg predicted that research scientists would, in the future, practice a “dramatically different type of science” than had been seen in the last quarter of the 19th century, and suggested that cancer could become understandable in terms of a small number of underlying principles. The 2022 review builds on the original principles and proposes emerging hallmarks and enabling characteristics, including those under the umbrella of “unlocking phenotypic plasticity”.

What is phenotypic plasticity and how is it relevant to cancer cell biology?

Relative to the huge amount of development and differentiation that occurs during organogenesis (embryonic differentiation), cells are typically restricted in the extent to which they can differentiate.7 This restriction allows cells to remain organized and functional within their respective tissue. In cancer, however, cells undergo molecular and phenotypic changes that allow them to adopt different identities along a phenotypic spectrum referred to as cellular plasticity.8

Changes in cellular phenotype are important to cancer progression because these changes can facilitate tumor initiation and metastasis, immune invasion, chemoresistance and many other aspects of tumor progression.8 Hanahan (2022) describes three types of phenotypic plasticity that can be unlocked during cancer:7

From a cell signaling perspective, phenotypic plasticity is important because it allows cells to take on a form that aids their invasive and metastatic abilities. From a therapeutic perspective, knowledge of this phenotypic plasticity can be clinically useful, as demonstrated by the successful development of a “differentiation therapy” for acute promyelocytic leukemia (APL).11,12 APL can be successfully treated by a combination of therapeutics which enable a blocked differentiation pathway to resume.13 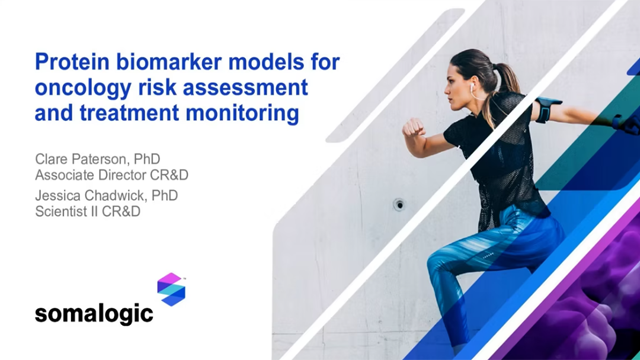 In this webinar you’ll learn how the power of large-scale proteomics can be leveraged for multiple divergent applications in the field of oncology, discover how proteomic risk scores can be used to identify high-risk patients and monitor for adverse effects and to analyze thousands of proteins to develop cancer susceptibility models.

Tumor heterogeneity and the dynamic nature of cancer is a challenge for the development of therapeutics, as cells can harbor different sensitivities to treatment.14 The heterogeneity of cancer has been well established with respect to genomics, thanks to advances in genomic technologies and single-cell sequencing. However, tumor evolution can also be non-genomic, as demonstrated in a recent and comprehensive study led by Carlos Caldas, professor of cancer medicine at the Cancer Research UK Cambridge Institute.15 Caldas and colleagues explored phenotypic diversity using a biobank of patient-derived tumor xenograft models representing the diversity of human breast cancer.

Using a mass cytometry panel targeting oncogenic signaling pathways, the group measured protein expression profiles in over 400,000 cells. The landscape of cell phenotypes and activation states was mapped and later integrated with genomic data and compared in the context of in vitro drug screening. Interestingly, phenotypic diversity did not correlate with genetic intra-tumor heterogeneity. What does this say about the functional relevance of each of these approaches, and how they might coexist? “That is the important question in the field,” says Caldas. “I do not have a definitive answer. Heterogeneity can be genomic and phenotypic – to date, we have mostly focused on genomic/clonal heterogeneity, but we now realize that phenotyping heterogeneity as a result of cellular plasticity is very important for processes such as dormancy, metastasis and drug-tolerant persisted states.”

Phenotypic states were mostly defined by lineage, specifically, a spectrum spanning luminal versus basal-like states, and the epithelial-to-mesenchymal cell state transition described earlier. “Cancer cells try to imitate the tissue from which they are derived, so it is not uncommon for breast cancer cells to express both luminal and basal markers,” says Caldas. “It is true though that estrogen receptor-positive (ER+) and human epidermal growth factor 2-positive (HER2+) breast cancers are mostly luminal-like and triple-negative breast cancers are mostly basal-like. In the normal breast epithelium, there are two layers of epithelial cells: luminal cells, which line the lumen of the breast ducts and can differentiate into milk production, and basal cells, which are myoepithelial and abut the basement membrane.”

According to Caldas, the field now believes that basal cells and luminal cells arise from distinct progenitors. “Confusingly, however, basal-like breast cancers in most instances originate from a luminal progenitor and not from the basal cells in the epithelium,” He adds.

Exploring these diverse phenotypic states is important for the field of cancer research because there is growing evidence to suggest that pretreatment cellular phenotypic composition is a determinant of response to anticancer therapies. This was the conclusion from Caldas’ work, and in some cases, cell phenotypes even outperformed genomic markers in determining treatment response.

Understanding the influence of bone microenvironment on breast cancer cells

Given that cancer can resurface after a period of dormancy, there is a need to understand how certain cells escape therapy and identify therapies that can eliminate those cells. This is the focus of the Xiang (Shawn) Zhang laboratory of the Baylor College of Medicine; recently, the group identified a way in which the bone microenvironment drives metastasized ER+ breast cancer cells in bone toward a basal and stem-like state.16 “Bone metastasis is a long process, especially in patients with ER+ cancer where disseminated tumor cells can remain dormant for up to 20 years,” explains Professor Zhang.

“In this study, we found that the heterotypic interaction between cancer cells and osteoblasts promotes pronounced changes at the molecular level which associates with endocrine resistance in bone metastasis,” adds