Complete the form below and we will email you a PDF version of "CRISPR Screening: Studying Evolution in a Dish"

Complete the form below to unlock access to this Audio Article: "CRISPR Screening: Studying Evolution in a Dish"

CRISPR screening enables the rapid and unbiased identification of genes relevant to a specific biological pathway. We explore how researchers are using this cutting-edge tool to shape our understanding of biology and advance medicine.

In 2012, the invention of CRISPR-Cas9 genome editing technology marked a new era in biology – providing a powerful new tool to make changes to DNA in a precise, directed manner.

“CRISPR-Cas9 is like cut, copy and paste for DNA,” explains Neville Sanjana, core faculty member at the New York Genome Center and assistant professor at New York University. “But the quantum leap forward with this gene editing technology is because of its programmability. The ability to program Cas9 to go to any specific place in the human genome is enabling [its use] for large-scale screening.”

CRISPR screening – which uses the CRISPR-Cas system to edit thousands of genes and measure the functional impact of those edits in a single experiment – has rapidly become a popular and productive tool for the biomedical research community.

“Over the past 10 years, we’ve taken advantage of the ability of CRISPR screens to cast a wide net of genetic hypotheses and, using that wide net, pinpoint the genes responsible for many different diseases and traits,” says Sanjana.

The widespread application of unbiased screening based on gene editing is uncovering new molecular mechanisms in basic biology, cancer research, immunology, neuroscience and many other fields – and opening exploitable opportunities for precision medicine.

What is CRISPR screening?

The Clustered Regularly Interspaced Short Palindromic Repeats (CRISPR)-associated protein 9 (Cas9) system consists of the Cas9 enzyme, which creates a double-stranded break in the DNA, and a guide RNA, which bring the nuclease to a specific location in the genome. When the cell attempts to repair the damage, it does so imperfectly – leading to a gene knockout. CRISPR screening is an application of this technology, which involves the delivery of huge libraries of lentiviral guide RNAs into a large population of cells.

“Each cell has a different mutation in a different gene, making it possible to study the effects of removing every gene in the genome in an unbiased and massively-parallel way,” describes Sanjana.

While gene knockout experiments that completely inactivate the target gene are the most common type of CRISPR screen, the core technology has also been adapted to make it possible to activate (CRISPRa) or silence (CRISPRi) target genes without permanently altering the DNA.

In the pooled CRISPR screen format, the targeted cells are challenged with a selective pressure, such as a drug treatment, and subsequently evaluated through the analysis of sequencing data to identify gene changes that have a positive or negative phenotypic effect. The results are typically ranked lists of genes that confer sensitivity or resistance to the specific biological challenge under investigation. The final step is to validate that any observed phenotypic changes are due to the specific effects of the mutation.

“I’m a huge fan of pooled screens because they provide an incredibly powerful tool for research without the need for complex laboratory infrastructure like robotics,” says Sanjana. “That makes it feasible for a single experimenter to carry out a genome-scale screen in a relatively straightforward manner.”

In contrast, arrayed screens are carried out in multi-well plates, which enables researchers to look directly at the effects of individual guide RNAs on a well-by-well basis.

“With the arrayed screens, it’s much easier to identify the effect of a specific mutation you’ve introduced using CRISPR,” states Elena Navarro Guerrero, head of functional genomics at the Target Discovery Institute at the University of Oxford. “But they’re more costly and time-consuming than pooled screens.”

As each mutation is pre-defined, arrayed screens are also easier to combine with read-outs that don’t involve DNA sequencing – such as imaging, proteomics and metabolomics profiling. But recent advances in single-cell multiomics are opening new possibilities to obtain high-content read-outs, such as gene expression or epigenetic state, to characterize individual cells from pooled CRISPR screens with unprecedented detail. 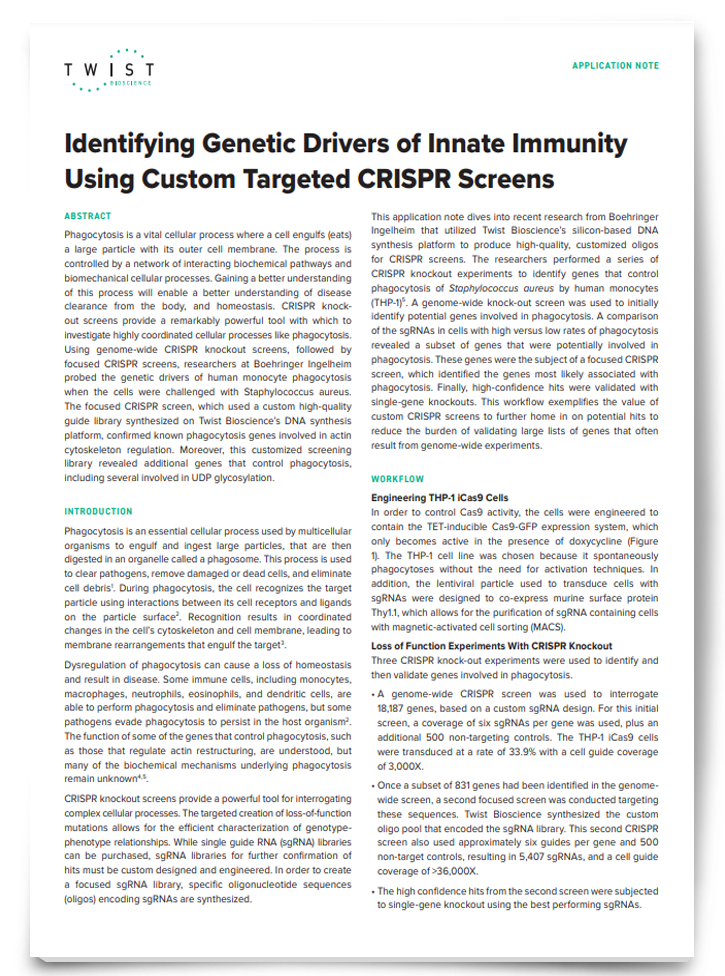 Download this app note to discover how researchers were able to produce high-quality, customized oligos for CRISPR screens, identify a number of genes that affect phagocytosis in human monocytes and avoid the cost and time impact associated with validating hits generated by genome-wide screens.

From gene to treatment

One of the areas of biggest therapeutic potential for the application of CRISPR screening is precision medicine. Determining which genes enhance or reduce the activity of a specific drug opens the opportunity for stratifying patients before treatment.

The first genome-scale CRISPR screen, which was published in 2014, demonstrated the promise of the approach to identify mutations that confer drug resistance in cancer cells. The pooled screen, which targeted 18,080 genes with 64,751 unique guide sequences in a melanoma model, identified candidate genes whose loss is involved in resistance to vemurafenib, a drug that targets mutant protein kinase BRAF. The results from such studies will pave the way to more detailed genetic profiling of a patient’s tumor to help predict whether they will benefit from a particular treatment.

“With CRISPR screens, we can deliver on the promise of personalized medicine and make informed treatment decisions. It’s like having a lookup table of genotypes — that is, specific mutations — where each mutation is connected to a specific biological phenotype,” says Sanjana.

CRISPR screening can also be used to explore the effects of changes in non-coding regions of the genome. In 2015, Sanjana was part of a team who used CRISPR guide libraries designed to interrogate the effects of mutations targeted to the BCL11A erythroid enhancer, a non-coding genomic element involved in controlling the expression of fetal hemoglobin.

“Its been speculated for a long time that reactivating the fetal form of hemoglobin, which is usually switched off in adults, could provide a substitute for the adult version in patients with certain blood diseases affecting the production of adult ß-hemoglobin,” says Sanjana.

In 2021, the results of a clinical trial of a gene-editing therapeutic targeting the BCL11A enhancer were published. Two patients – one with ß-thalassemia and the other with sickle cell anemia – had received an infusion of their blood cell stems genetically edited to reactivate the production of fetal hemoglobin. More than a year later, both had high levels of fetal hemoglobin expression and no longer needed to receive blood transfusions.

“The CRISPR guide RNA used in that clinical trial came out of the library we’d designed for our screen,” says Sanjana. “It’s a great example that really

demonstrates the power of this approach.” 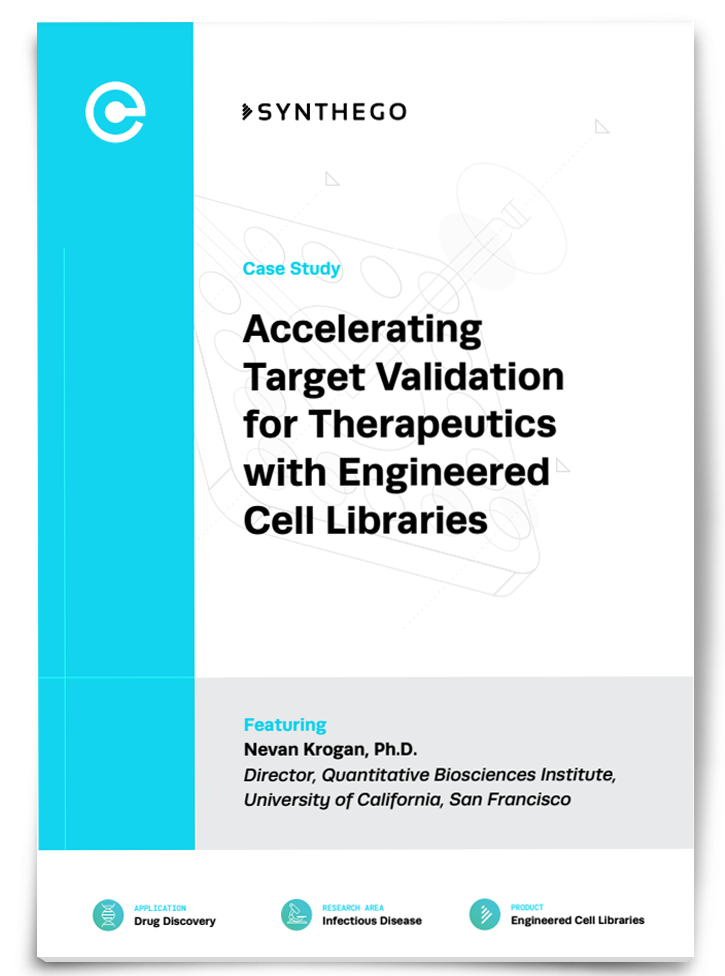 Download this case study to learn about the use of engineered cell libraries in host-virus interaction studies, the development of genome engineering screens and data from CRISPR knockout screens, and downstream assays showing functional and clinical relevance of targets validated.

While performing CRISPR screens on conventional immortalized cell lines is relatively straightforward, it can be more challenging to carry out similar studies on other types of cells.

“One of the biggest limitations is the large number of cells needed – especially for the pooled screens where you need to have at least 70 to 100 million cells – which can be a real problem when you’re working with limited patient samples,” says Navarro Guerrero. “Another problem is that some cell types – such as macrophages or neurons – are difficult to infect with lentiviruses.”

To circumvent these challenges, many researchers are using induced pluripotent stem cells (iPSC), which may represent more relevant patient-derived models for studying human diseases. For instance, Navarro Guerrero’s team has recently developed a lentiviral transduction method for the delivery of CRISPR/Cas9 to macrophages derived from human iPSC, with efficiencies close to 100%.

Researchers studying neurodegenerative diseases also need to find ways to mimic the effects of aging on cells – to enable screening for phenotypic changes relevant to the disease pathology. For example, Balmus’s team has used CRISPR screening to explore the underlying disease mechanisms behind Ataxia-telangiectasia, a rare inherited neurodegenerative condition caused by mutations in the ATM gene – by exposing cells to reactive oxygen species to accelerate the aging process.

“We’ve found a transcription factor gene that, when lost, rescues the sensitivity of ATM-deficient cells to reactive oxygen species,” says Balmus. “We think this gene is highly relevant to the disease phenotype because it’s normally expressed only in the specific type of neurons that are dying in these patients.” 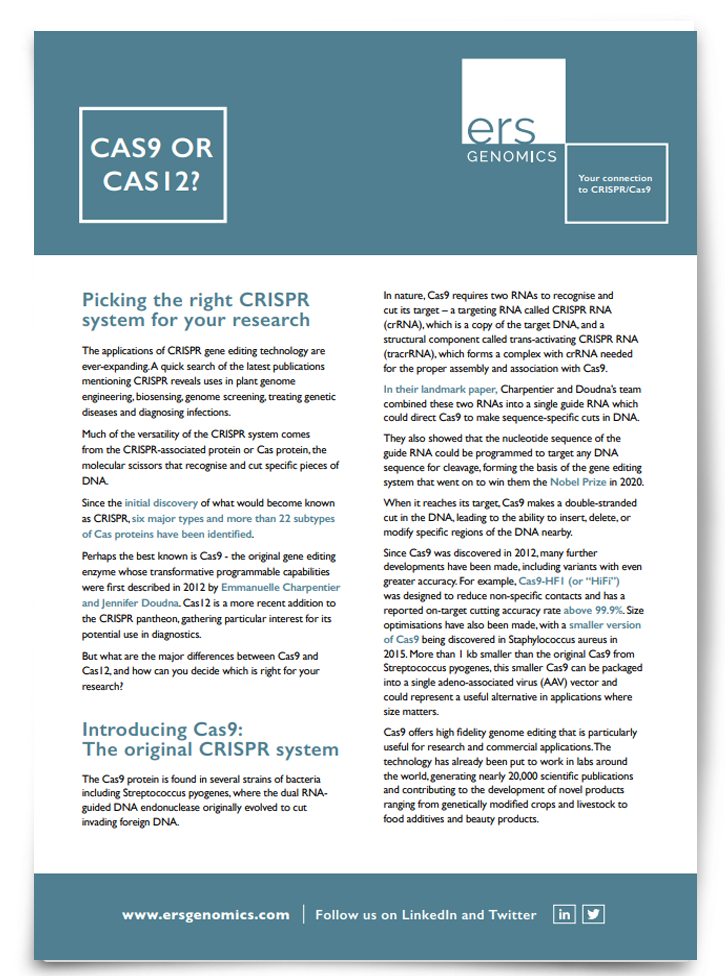 The applications of CRISPR gene-editing technology are ever-expanding. Much of the versatility of the CRISPR system comes from the CRISPR-associated protein or Cas protein, the molecular scissors that recognize and cut specific pieces of DNA. Download this app note to discover what the major differences are between Cas9 and Cas12 and what is right for your research.

“It’s a tool that allows you to perform evolution in a dish,” says Balmus. “Some of the discoveries we’re making are very counterintuitive; there’s no way we could have predicted them in advance.”

The technology has provided researchers with a powerful tool to interrogate a variety of biological problems – such as dissecting the underlying causes of disease or identifying gene changes that confer drug sensitivity or resistance.

“What I like about working in this area is that it allows you to be surprised,” says Sanjana. “The sense of discovery you get from these high-throughput functional genomics screens is amazing – you get to walk into new biology every day.”

Alison Halliday, PhD
More from this author >
Advertisement
Chosen for You
Listicle