The protein tau plays a critical role in the assembly and structure of neuronal microtubules. Improper folding of tau causes abnormal accumulation of tau into highly structured filaments, which agglomerate into microscopically visible “tangles.” More than 20 neurological diseases – including Alzheimer’s disease – are characterized by this disfunction in tau and are collectively called tauopathies. Most of these disorders have been linked to mutations in the tau gene.

While tauopathies can easily be identified post-mortem by the presence of tangles in brain cells, current structural biology research seeks to understand the formation of individual filaments at the molecular level. The ultimate goal is to understand how misfolded tau assembles into filaments. This may lead to the development of effective therapies that disrupt this process and the associated disease. Cryo-electron microscopy (cryo-EM) has emerged as a critical tool in the structural analysis of tau filaments, as techniques such as single particle analysis can reveal atomic-resolution details of the aggregation process. Cryo-EM has already been used to solve structures of ex vivo brain samples for several tauopathies, including Alzheimer's disease, progressive supranuclear palsy, chronic traumatic encephalopathy, Pick’s disease and cortico-basal degeneration.

In the rapidly growing area of structure-based drug design, development of targeted therapeutics inherently relies on the quality and the resolution of the structural information. Tauopathies are no exception. Ultimately, an effective treatment will likely require a clear understanding of initial protein misfolding down to the formation of the filamentous tangles. Notably, it has been found that filaments from the different tauopathies are characterized by distinct tau folds, also known as conformers, which can be used to classify the different tauopathies. By understanding how tauopathies are related, researchers can deconvolute the specifics of disease progression. A better understanding of how these different filaments assemble may eventually lead to the development of specific, mechanism-based treatments.

The study of the underlying mechanisms of tau aggregation requires inspection of the assembly process in a controlled environment. As these observations cannot be practically made in vivo, recombinantly expressed protein fragments are often used for in vitro model systems of protein aggregation. Assembling and characterizing tau filaments that reflect in vivo structures is critical towards understanding filament formation. Cryo-EM is well-suited for the study of these transient structures, as samples are vitrified at time intervals during the assembly once the desired level of assembly has been reached, essentially providing  “snapshots of the assembly process” that can be examined for the duration of the experiment.

Until recently, researchers have been unable to replicate the exact tau structures found in vivo, as buffer conditions in vitro often fail to mimic the cellular environment, and fragments do not always follow the same aggregation pathways as the full-length protein. This results not only in different protein-protein interactions, but even proto-filaments with the same components but with significantly different structures (ultrastructural polymorphs). Molecular-scale classification is often needed to differentiate between these aggregates, but this can be time consuming, and many techniques require that the sample contains only a single structure. With cryo-EM single particle analysis, multiple polymorphs can be distinguished not just between different samples, but even within the same solution, as structurally similar classes can be grouped during data processing. 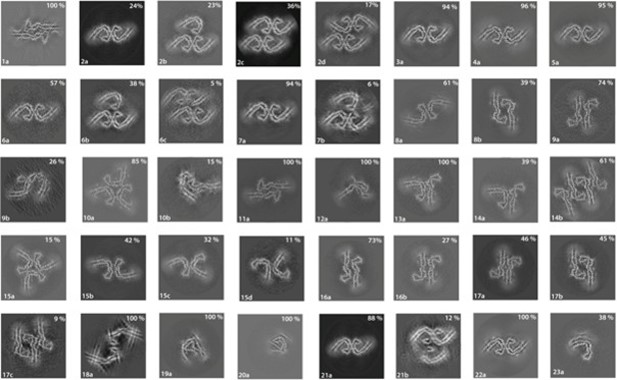 Figure 1: XY central slices of tau filaments show a single layer of the tau protein in the filament. A filament consists of thousands of layers stacked upon each other. Image courtesy of Sofia Lövestam, MRC Laboratory of Molecular Biology, Cambridge, UK.

Until recently, researchers have been unable to replicate tau filament structures like those found in vivo. In a recent eLife publication, researchers used a high-throughput cryo-EM workflow to test a broad range of conditions for in vitro tau aggregation. They determined 76 tau filament structures, including several that reflected the in vivo conformations of tau found in disease. 27 of these structures were novel, broadening our fundamental understanding of tau’s structural versatility in forming amyloids.

During their survey of sample preparation conditions, the authors noted that tau aggregation was highly dependent on cations present in the solution. While magnesium and calcium cations caused the formation of the paired helical filaments found in Alzheimer’s disease, sodium caused tau folds that matched those seen in chronic traumatic encephalopathy. This highlights the critical role of environmental conditions in the assembly conditions, which affect the final structure of the tau filaments

Notably, this kind of high-throughput structural characterization is only possible thanks to novel advances in cryo-EM technology and workflows. Initial screening was conducted at lower resolution with rapid, software-guided characterization that quickly identified optimal areas of the vitrified samples for further imaging on a higher-resolution instrument. The subsequent data analysis was also greatly accelerated by software automation that performed much of the image processing without manual input from the researchers.

The future of tauopathy treatment

Despite our increasing understanding of tauopathies, there are still no approved treatments that stop the progression of these diseases. The studies above highlight the dramatic effects that the cellular environment can play in the aggregation propensity and structure of tau and other amyloid-like proteins. There is a pressing need for structural information, not just in vitro, but ideally also within the cellular context, to guide the development of targeted treatments that are tailored to halt specific protein interactions.

Cryo-electron microscopy is ideally suited to provide this critical information, particularly with the increasing interconnectivity of complementary cryo-EM techniques, such as single particle analysis and cryo-tomography. Automated workflows give researchers a clear and reliable way to generate structures that once would have taken weeks, if not months, to obtain. By lowering the barrier of data collection, research can focus on optimizing experimental conditions to more accurately replicate in vivo conditions, and see the behavior of potential therapeutics at a molecular scale. This level of information promises to revolutionize our understanding of neurodegenerative diseases and the pace at which we can discover and test potential treatments for these debilitating diseases.
About the Authors:
Abhay Kotecha is a manager, application scientists at Thermo Fisher Scientific.
Alex Ilitchev is a scientific writer at Thermo Fisher Scientific.

Complete the form below to unlock access to this Audio Article: "Cryo-EM Research Is Changing the Way We Look at Neurodegenerative Diseases"