Complete the form below and we will email you a PDF version of "Do You Have A Games Console? You Could Be Solving The Structure Of Proteins"

Sjors Scheres is a group leader at the Medical Research Council’s (MRC) Laboratory of Molecular Biology (LMB) in Cambridge, UK. His group develops algorithms to assist in solving the 3D structures of proteins imaged using Cryo-Electron Microscopy (Cryo-EM). Sjors and his group’s algorithms are freely available, and they have contributed to the ‘Resolution Revolution’ in Cryo-EM structural biology enabling the solving of previously unsolvable structures. The impact of Sjors and his group’s work on structural biology and structure-based drug development has not gone unnoticed, and Sjors was named by the journal Nature as one of the top ten most important scientists of 2014.

I caught up with Sjors at the recent MRC Postdoc Symposium to find out more about his Group’s work.

In Cryo-EM, your purified protein of interest is in a buffer solution which you quickly freeze in liquid ethane (figure 1). You then fire electrons, with a transmission electron microscope, through this thin layer to image the protein molecules which are suspended in different orientations in space. What you get is a large image that looks like an untuned television screen. However, if you look closely, you can see that the tiny black and white specks of noise are your protein of interest photographed in random orientations. The 2D images are then sorted based on their similarity in shape. The resulting groups are then averaged to remove noise, and then assembled together using software designed by Sjors’ group, to recreate the 3D structure of the protein.

Sjors likens this to your brain generating a 3D image of the world from the 2D images on your retinas.

Purified protein is frozen in buffer. Transmission electrons are fired through the sample onto detectors. The detected images of the protein molecules in 2D are then clustered based on their similarities of shape, and the protein is reconstructed in 3D using statistical algorithms. (Image Credit: Centre for Nanoscale Systems Website, Harvard, USA).

I next asked Sjors to explain why there has been an explosion in the field of Cryo-EM in recent years. Sjors describes the advances in technology that have driven the field forward in recent years and explains his group’s contribution to the Cryo-EM ‘resolution revolution’.

With these improvements in resolution from the digital electron sensors and with improved automation, terabytes of data are generated per experiment. Computing power is an issue for analysis of these datasets. To find out how this limited progress in the technique I asked Sjors about the computational limitations of Cryo-EM, and he told us about an ingenious way they had overcome data handling in the image reconstructions.

Sjors finished by giving some examples of the structures he and his group have recently solved. One of these structures being gamma-secretase, an intramembrane complex that cuts proteins inside the membrane, such as the notch receptor (involved in cancer) and the amyloid precursor protein. Gamma-secretase makes the final cut of the amyloid precursor protein, producing amyloid-beta which aggregates to form the amyloid plaques characteristic of Alzheimer’s Disease. 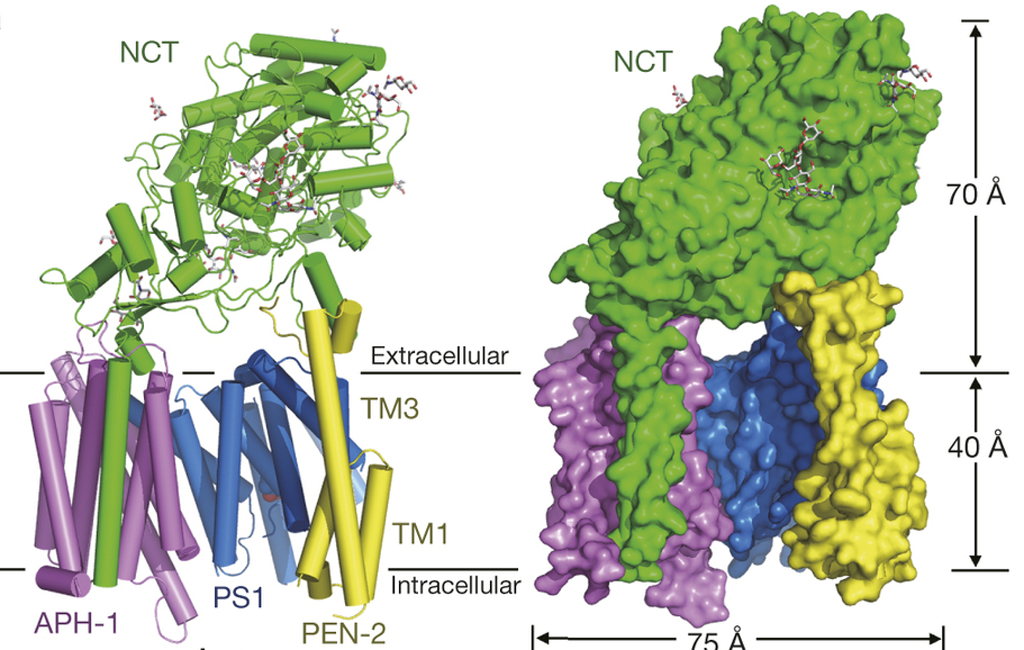 Structure of Gamma-secretase. Shown as a cartoon representation on the left and surface view on the right. Also visible are the eleven N-linked glycans displayed in stick form. Taken from Bai et al. Nature 2015.

As Sjors mentions towards the end of the final snippet, Cell, Science or Nature journals frequently feature papers on protein structures that have been solved by Cryo-EM. This emphasizes the power of the technique in describing protein structure. This giant leap forwards in solving protein structure is due to the ‘Resolution Revolution’, which involved improved electron sensors and better algorithms for reconstruction, but it was also made possible by advances in computer game technology.

More information on the Scheres group and their open source software can be found at http://www2.mrc-lmb.cam.ac.uk/groups/scheres/


Advertisement
Chosen for you
Industry Insight