A drug’s efficacy can be impacted significantly by the way in which it is delivered. By developing a variety of drug delivery systems (DDSs) it is now possible to better control the pharmacokinetics, pharmacodynamics, toxicity, immunogenicity and efficacy of drugs.

By finding the best-suited delivery mechanism for a specific drug molecule it is possible to “optimize” the performance of that drug inside the body.  Here we take a look at the different administration methods, discover what is meant by a "drug delivery system", and highlight key drug delivery “vehicles”.1

Drug delivery systems – what are they?

A system that is used as a medium or “carrier” for administering a therapeutic agent/drug to a patient’s body.

Drugs can be introduced into the body via several different routes (Figure 1). These routes are generally classified by their “starting point” – the location at which the drug is administered. Each route has its own advantages and disadvantages. 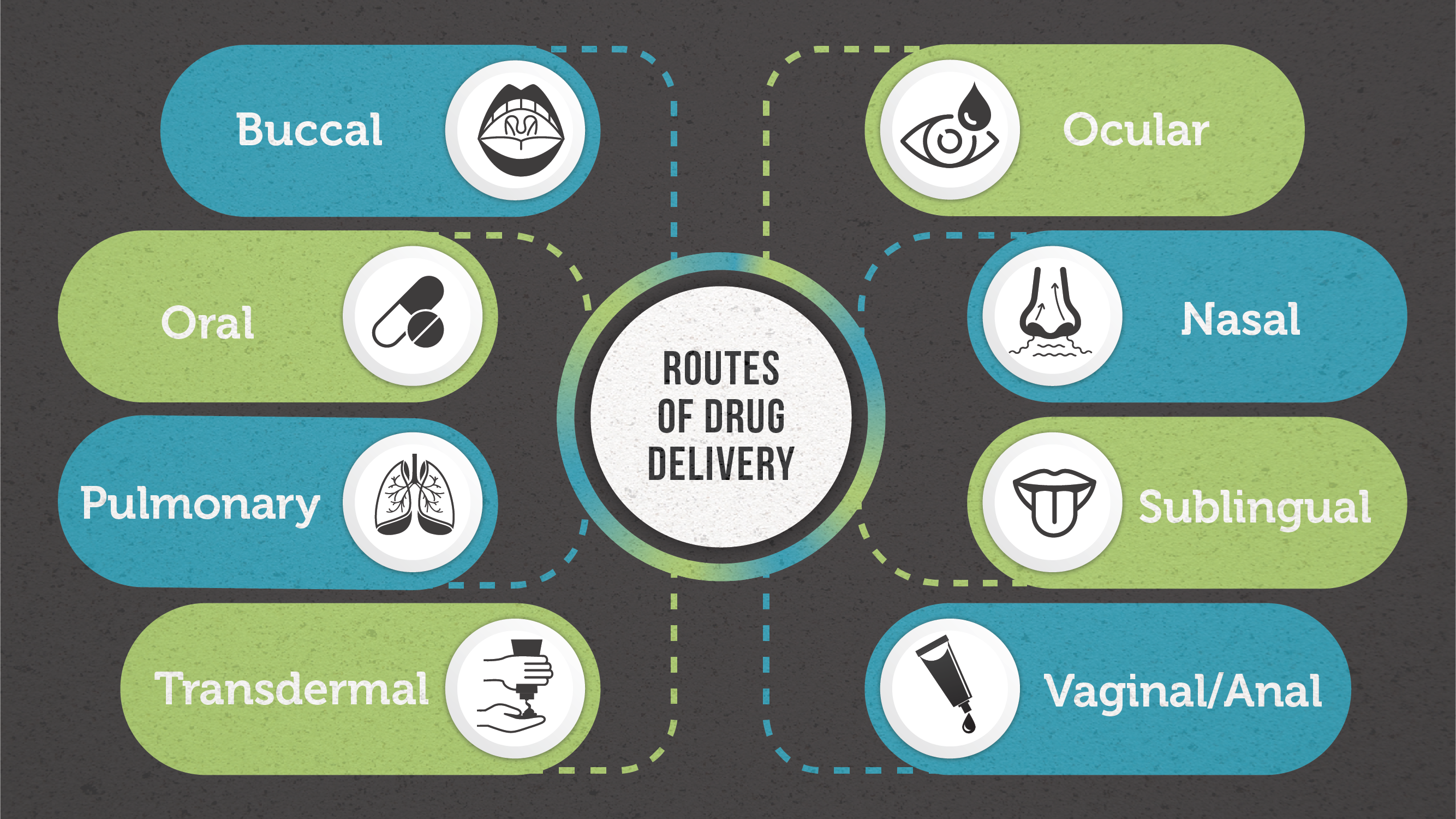 Buccal drug delivery describes the administration of a drug through the buccal mucosa (lining of the cheek).2 Whilst this route of delivery avoids first-pass effects (rapid drug uptake and metabolism into inactive compounds by the liver), it presents as a “challenging” barrier to drug absorption, especially for larger biopharmaceuticals – delivery is currently limited to small molecule drugs with lipophilic properties as they can readily cross the membrane.3 As the buccal route is often used for extended-release drug delivery (whereby the drug is released in a controlled way over an extended time period), formulations that can attach to the mucosa are typically preferred. A variety of formulations have been developed for buccal delivery including; tablets, gels, lozenges and patches.3

Nasal drug delivery involves the delivery of a drug via the nasal cavity of the nose. Nasal spray medications are usually used for the treatment of local diseases affecting the upper respiratory tract (e.g. nasal congestion, allergic rhinitis).4 However, in some circumstances (where for example rapid onset is required) this delivery approach can be exploited for systemic delivery of small molecule drugs – e.g. the migraine medication olmatriptan (Zomig®).5 The thin nasal mucosa is heavily vascularized meaning transfer to the systemic blood circulation is rapid, and similarly to buccal administration, first-pass metabolism can be avoided. Liquid and (less frequently) powder formulations can be used for nasal drug delivery.6

Ocular drug delivery has been somewhat of a difficult task for drug delivery scientists, due to the eye’s unique anatomy and physiology – both static, dynamic and metabolic ocular barriers impede the absorption of drugs through the eye. There are several different administration routes for the delivery of drugs to specific parts of the eye. Researchers have been able to partially combat the challenges of delivering drugs to ocular tissues through identifying specific efflux and influx transporters in the eye and modifying drugs to target these transporters.7

Oral drug delivery is by far the most well-known and often the preferred route of drug administration due to its non-invasive nature, ease-of-use, cost-effectiveness, and the highly absorptive properties of the gastrointestinal (GI) tract.8 For oral drug delivery to be successful, the aqueous solubility of the drug compound in the GI system should be assessed to determine if modifications are required to improve bioavailability. Oral drug delivery does however have drawbacks when it comes to its suitability for certain patient populations including; pediatric, geriatric and those with cognitive impairment.8

Pulmonary drug delivery describes the administration of a drug via inhalation through the mouth and into the airways. Inhaled medications are an effective means for treating local disease of the lungs. More recently, pulmonary drug delivery has also been studied as a potential route of administration for systemic diseases due to the vast absorptive surface area and highly permeable membrane of the alveolar region. Pulmonary delivery is unaffected by dietary complications and interpatient metabolic variation, two additional advantages.9

Sublingual drug delivery is the term used for administration of a drug under the tongue, which is then absorbed into the bloodstream via the tongue’s ventral surface and the floor of the mouth.10 Sublingual absorption is rapid, therefore onset of action can be achieved quickly. This route of delivery also avoids hepatic first‐pass metabolism. It does, however, disrupt talking, eating and drinking which is disadvantageous. In addition, absorption and consequently efficacy of the drug is reduced by smoking due to vasoconstriction of the vessels, therefore use in smokers is not recommended.10

Transdermal drug delivery is a method of delivering a drug systemically by applying a formulation onto intact skin.11 Initially the drug penetrates the stratum corneum and then progresses through the deeper epidermis and dermis where it finally systemically absorbed via the dermal microcirculation.12 The fact that it is non-invasive and suitable for unconscious or vomiting patients are two key advantages.

Vaginal/anal drug delivery routes have a faster onset of action compared to the oral route and a higher bioavailability. Rectal medications can be used to exhibit local effects (e.g. laxative) or systemic effects (e.g. analgesics when other routes are contraindicated). Vaginal drug administration avoids first-pass metabolism and is unaffected by gastrointestinal disturbances.13 The vaginal route is often considered for administration of hormones and to address women’s health issues. Numerous vaginal formulation options are available including; hydrogels, tablets, pessaries or suppositories.14

Targeted drug delivery approaches are of great interest as they enable concentrated delivery of a drug compound to its desired target – increasing efficacy and reducing off-target effects.

What is targeted drug delivery?

Targeted drug delivery is a means of delivering a drug in a way that considerably enhances the concentration of that drug in particular parts of the body relative to others.
The mechanism by which a drug is targeted can be broadly divided into two types; a) passive targeting, b) active targeting (Figure 2). 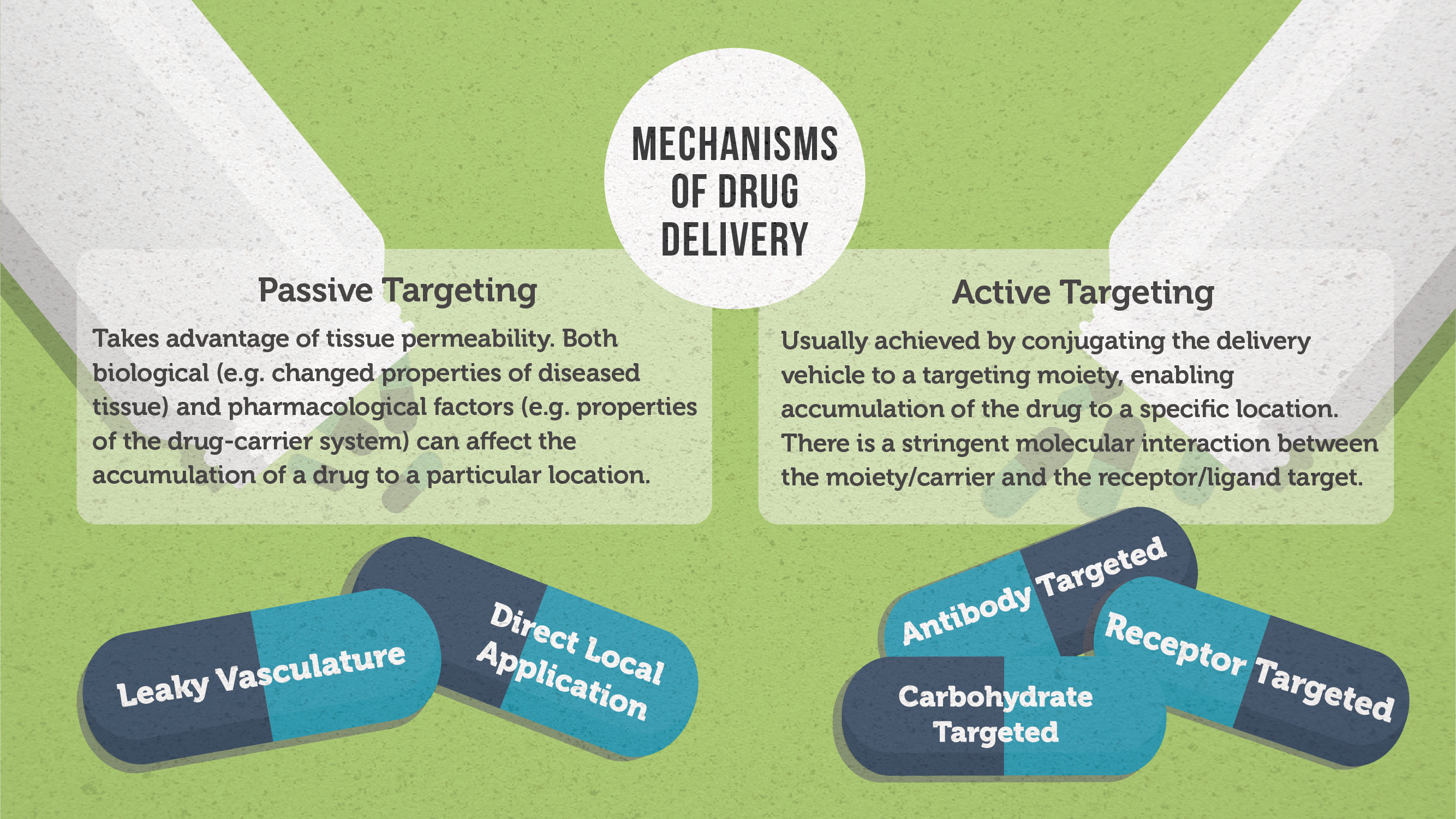 Nanoparticles are typically 100–500 nm in size.16 By modifying their properties, it is possible to optimize bioavailability, decrease clearance, and increase stability, making them ideal “carriers” for delivering a particular drug to its specific target-tissue. Nanoparticles have good solubility and consequently increased bioavailability due to their small size and larger surface area. Their appeal as drug carriers is enhanced by their ability to:16

Nanoparticles can enter the body via three main routes;  injection, inhalation, or taken orally. To develop the “ideal” nanoparticle-based delivery system you must first determine how the body will handle exogenous particulate matter. If the body detects a nanoparticle as “foreign”, the body’s natural immune response will result in it being cleared from the body – this issue can be addressed by changing the surface properties of the particle. By incorporating polymer complexes into the surface, binding of plasma proteins (which typically increase clearance) is prevented.16

Nanoparticles have been explored as carriers for drugs to treat numerous conditions including cancer, neurological disorders and acquired immune deficiency syndrome (AIDS).


An example of how nanoparticle-based drug delivery can be used to kill cancer cells. Credit: Institute for Molecular Bioscience

Liposomes are spherical vesicles consisting of one (or more) phospholipid bilayers.17 These vesicles present themselves as an attractive delivery system due to them possessing flexible biochemical and physiochemical properties allowing them to be easily manipulated.18 Liposomes have a unique ability to encase lipophilic and hydrophilic compounds, making them suitable carriers for a range of drugs. Other advantages include their capacity to self-assemble, ability to carry large drug-loads, and their biocompatibility. Being composed of natural phospholipids makes them “pharmacologically inactive”, meaning they display minimal toxicity. Liposomes can be categorized into four main types:

It is worth noting that whilst liposomes can be easily manipulated and modified – with modification comes increased chances of detection and clearance.18

Microspheres are small (1–1000 µm) spherical particles,19 that are typically prepared from linear polymers and are described as “free flowing powdered drug delivery systems”.20 When it comes to their use as a drug delivery system, they possess numerous advantageous properties including being; biodegradable, biocompatible and easily administered. They can be used for both localized and targeted delivery of drugs. The drug is dispersed throughout the polymer matrix of the microsphere. Microspheres can be prepared using either natural polymers or synthetic polymers.1

Synthetic polymers can be further classified depending on whether they are biodegradable or non-biodegradable. The persistence of non-biodegradable microspheres in the body can increase the risk of toxicity over longer time periods. Biodegradable polymers, however, do not pose the same risk, making them better suited to parenteral applications.1

Other carrier-based methods include resealed erythrocytes, niosomes, and monoclonal antibodies.

In this article, we discuss the potential benefits of Natural killer (NK) cell therapies.

END_OF_DOCUMENT_TOKEN_TO_BE_REPLACED

In this article, we discuss the evolution from today’s pharmaceutical manufacturing to the future methods of Pharma 4.0. In particular, we explore some of the technologies and techniques that can smooth that transition and briefly review several ongoing examples of industrial innovation.

END_OF_DOCUMENT_TOKEN_TO_BE_REPLACED

The Development of Plant-Based Medicines for Prescription

END_OF_DOCUMENT_TOKEN_TO_BE_REPLACED

How To Easily Set Up Own Pipetting Protocols on Electronic Pipettes