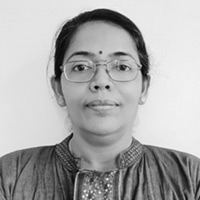 Srividya Kailasam holds a PhD in analytical chemistry from the Indian Institute of Technology, Madras. She has developed numerous LC, LC-MS and LC-MS/MS methods for the analysis of a variety of samples.
Learn about our editorial policies
Article

Srividya Kailasam holds a PhD in analytical chemistry from the Indian Institute of Technology, Madras. She has developed numerous LC, LC-MS and LC-MS/MS methods for the analysis of a variety of samples.
Learn about our editorial policies
Read time:

Ion exchange chromatography, or IEX, is a class of liquid chromatography (LC) used to separate organic and inorganic molecules. One area in which it is particularly useful, and the focus of this article, is the separation of charged biomolecules including amino acids, proteins, carbohydrates and nucleic acids. Molecules such as proteins have a unique 3D structure and hence specific ionizable groups on their surfaces. As a result, the net surface charge at any given pH is unique to a molecule. This characteristic is exploited to separate molecules based on their interaction with the oppositely charged particles of the stationary phase and subsequent release from the column by modifying the pH or the ionic strength of the mobile phase.

In literature, the terms “ion exchange chromatography” and “ion chromatography” (IC) are often used interchangeably, thanks to the wide use of IEX, and refer to the separation of polar or ionic species. However, IC is really an umbrella term that includes IEX along with ion exclusion chromatography (IEC) and ion pair (IP) chromatography. IEX, which involves preferential binding of charged analytes to the oppositely charged functional groups of the stationary phase, is the predominant mechanism utilized in the separation of biomolecules. 1 IEX uses buffers containing salt for its mobile phase; separation is brought about by changing the ionic strength or pH of the eluent and detection is performed using ultraviolet (UV) or fluorescence detectors. On the other hand, IC more broadly is also used for the separation of inorganic ions, small organic acids, amines, alcohols, aldehydes and carbohydrates by any of the three modes, IEX, IEC or IP. For these types of analytes, electrolytic solutions are used for elution and suppressed conductivity measurement is the most commonly used detection technique for IC.

Ion pair chromatography can also be considered as a type of partition chromatography where analytes of interest are eluted from a neutral stationary phase with the help of oppositely charged reagent ions, or an ion pairing reagent. By changing the concentration of the ion pairing reagent in the mobile phase, the retention times of the analytes are varied, leading to their separation.

Biomolecules have functional groups that ionize in solution and impart a specific net charge to the molecule. For instance, proteins are made up of amino acids that have both amino (-NH2) and carboxylic acid (-COOH) functional groups. The 3D structure of a protein determines which of the amino acid residues are exposed on its surface. Depending on the pH of the medium, these residues ionize, giving the molecule positive and negative surface charges. At low pH values, more amino groups are protonated and protein molecules carry a net positive charge. On the other hand, at higher pH values, more carboxylic acid groups are deprotonated and the resulting anions make the surface of the protein molecules negatively charged. The total number of ionized functional groups present on the surface determines the net surface charge and each molecule has a unique net surface charge at any given pH value. A protein is electrically neutral at its isoelectric point (pI), which is a specific pH value at which it has no net charge on the molecule.

Figure 1 shows a mechanism of separation by IEX. When the polar or charged analytes are loaded into an ion-exchange column, they are electrostatically bound to the oppositely charged ions present on the surface of the stationary phase particles. The greater the positive or negative charges on the surface of the analyte molecules, the stronger the electrostatic attraction to the oppositely charged particles of the stationary phase will be. Retention time of the target analyte also depends on the number of interactions with the stationary phase. Aqueous mobile phases containing buffers and salts are used to elute the bonded analytes by varying the pH or ionic strength. 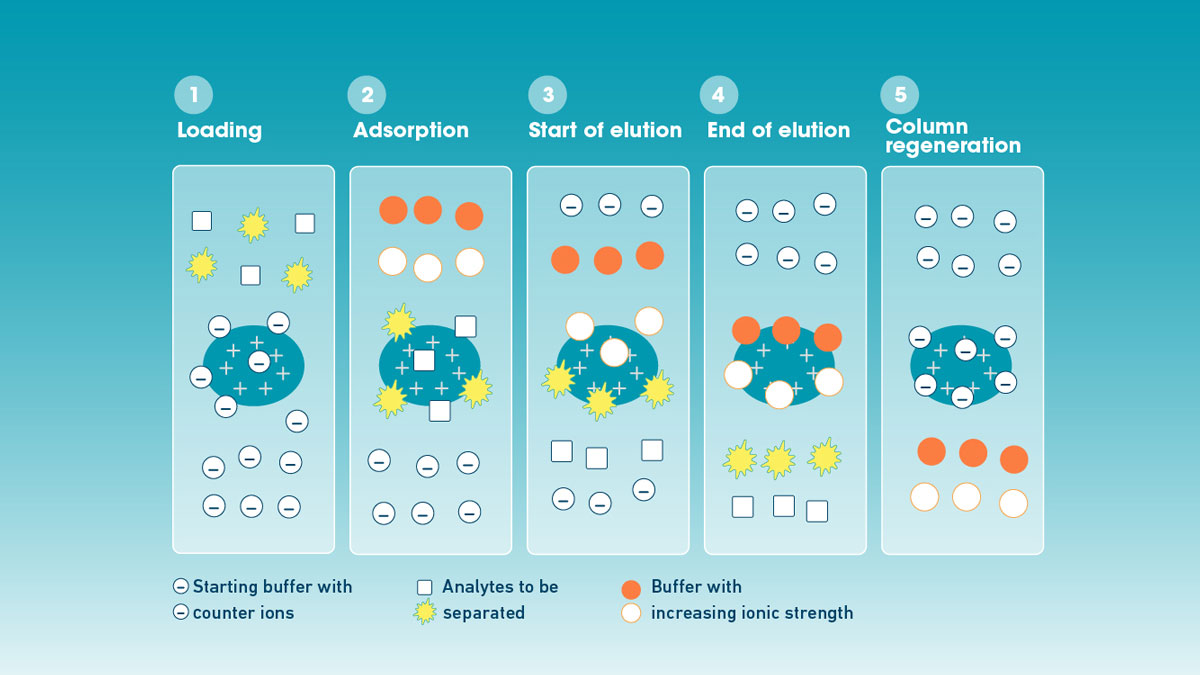 There are five main steps to the process of IEX:2

1.    Equilibration – As a first step, the stationary phase is washed with the start buffer (initial buffer composition) until the baseline is stabilized and eluent pH remains constant. This step ensures that the ionizable groups on the column are available to interact with the charged analyte molecules.

2.    Sample loading – Samples dissolved in start buffer or buffers of the same pH as the start buffers are injected into the column. The pH and ionic strength of the buffer are adjusted such that the analytes bind to the column while impurities do not.

3.    Wash – The column is washed once again with the starting buffer to remove uncharged molecules as well as molecules with the same charge as the stationary phase. The baseline stabilizes once the impurities are washed away.

4.    Elution –A salt gradient is used to elute the bound analytes as the ions in the elution buffer compete for and replace the analytes on the charged sites on the column surface. At low ionic strength, weakly bound analytes (molecules having lower surface charge densities), start eluting from the column. As the salt concentration is increased, strongly bound molecules with increasingly higher surface charge densities elute sequentially from the column. Alternatively, a pH gradient can be used to elute the bound analytes which are released from the column at their respective pI value. To elute cations, the pH of the eluting buffer is increased, whereas, anions are eluted from the anion exchange column by decreasing the pH of the eluting buffer. A pH gradient cannot be used if a molecule precipitates at its pI value.

5.    Column regeneration – Finally, the column capacity is restored for the next run by washing out any molecules bound on the column. To achieve this, a high ionic strength buffer is allowed to flow through the column until the baseline and pH of the eluent stabilize. The column is then conditioned with the starting buffer prior to the next run.

Although, UV or fluorescence detectors are most frequently used in IEX, other detectors such as mass spectrometers, refractive index (RI) or multi-angle light scattering (MALS) detectors have also been used.

Based on the charge on the ions to be separated, two types of IEX chromatography, namely anion exchange or cation exchange, are used. The anion exchange columns have positively charged functional groups covalently bonded to the stationary phase particles and cation exchangers have negatively charged functional groups bonded to stationary phase particles. As their names suggest, anion exchange chromatography is used for the separation of anions such as deprotonated or “acidic” protein molecules that have more carboxylic acid groups on their surface, while cation exchange columns are used for the separation of cations such as protonated “basic” proteins that have more amino groups on their surface.

Mixed-mode chromatography, which involves two separation mechanisms such as RP and IEX or IEX and HIC, using a single column is implemented to increase the resolution of the analytes.

The IEX columns are packed with porous or non-porous, inert, polymeric resin or gel beads that have functional groups covalently bonded to them. These groups impart charge to the surface in their ionized state depending on the pH of the buffer flowing through the column. The beads are made of materials such as dextran, agarose or cellulose. They have high physical stability and uniform size which supports high flow rate and ensures that the column volume does not change at high pH or salt concentrations. The size and porosity of the support beads plays an important role in the resolution of the charged species.

During method development, strong exchangers are used to enable the use of a broad pH range. This helps speed up the process. Although the use of weak exchangers helps to improve resolution when strong exchangers are not effective, these have limitations such as variations in sample load capacity with pH and longer equilibration times. When using IEX for purification, the chosen column should retain either the target analyte or the impurities due to the different net surface charges on the target molecules and impurities. The choice of media will depend on the extent of the purification desired, ranging from sample capture to final polishing.

Parameters affecting the separation include:

While there are several advantages of IEX, the technique has some limitations as well (Table 2) that must be factored in when selecting this technique for separation, purification or quantification of biomolecules.

Among the various LC techniques used for the analysis of biopharmaceuticals, IEX has been extensively applied for the separation and purification of monoclonal antibodies (mAbs) and proteins. Cation exchange chromatography with a salt gradient has been shown to be suitable for the separation of charge variants of the mAb cetuximab.4 A cation exchanger with a linear pH gradient has been used for the purification of a common light chain IgG-like bispecific antibody. This method has been shown to be successful in separating molecules differing in their sequence by a single charged amino acid or a pI difference of 0.1.5 Instead of conventional UV or fluorescence detectors, a MALS detector can be coupled with IEX to characterize protein populations such as short peptides, proteins with similar masses or oligomers that were not well resolved by SEC.6 Fractionation of crude protein mixtures and separation of seventeen proteins have been carried out using anion exchange chromatography with a linear pH gradient.7

To enhance the safety of therapeutic proteins and antibodies, IEX is used to remove contaminants such as viruses during downstream purification process. Cation exchange chromatography has been shown to be effective in the removal of xMulV, a model retrovirus, during the polishing step of mAb production.8 Not just the cells, but also cellular components have been separated for quantification or purification using IEX. Baseline separation and quantification of empty and full capsids in recombinant adeno-associated virus (rAAV) samples from multiple serotypes was achieved using QC-compatible anion exchange chromatography.9  Negatively charged extracellular vesicles (EV) in amniotic fluid were purified using weak cation exchange chromatography.10

In addition to proteins, sugars and nucleic acids have also been separated using IEX. Glycans have been fractionated according to their sialic acid content using a weak anion exchanger, prior to their desialylation, nano-LC separation and detection by both MS and nanofluorescence detectors.11 Short RNA oligomers (~20 mers) have been analyzed using mixed-mode chromatography involving two separation mechanisms, ion pair RP and anion exchange in a single column.12

Srividya Kailasam, PhD
More from this author >
Advertisement
Chosen for You
Infographic