Developing a new drug from the original idea to the launch of a finished product is an increasingly complex process often spanning 12-15 years and costing over $1 billion dollars.1 With so much at stake, huge investment has been made into technology and process improvements to drive down costs, increase efficiency and ultimately, bring better drugs to the market faster.2 The widespread adoption of automated high-throughput screening (HTS) and, more recently, ultra-high throughput screening (uHTS) represents one such process change. Presenting researchers with the ability to screen huge chemical libraries against an ever-increasing range of targets for lead discovery. In modern drug discovery HTS is typically described as testing between 10,000 to 100,000 compounds per day with uHTS defined by screening numbers more than 100,000 generated data points per day.3 Drug discovery has rapidly come to rely on this screening capability and the automation technology that enables it but, many believe HTS is at a crossroads, presenting users with a choice between quantity or quality.3 Should they move toward continuing to increase throughput or, to shift the focus of HTS development toward gathering more relevant biological data?

Automation has played a huge role in the development of HTS to date and, will likely be crucial in tackling the hurdles HTS is yet to overcome. By reducing the number of repetitive manual tasks, the potential for error is reduced and significant time savings can be realized, allowing the scientist to concentrate on research rather than repetition. Pharmaceutical companies have therefore invested in a wide range of automated instruments to increase the throughput across all areas of the early stage drug discovery process, from target-based research, combinatorial and analytical chemistry to primary and secondary screening.4 With automation now commonplace in the HTS drug discovery field, scientists are now looking at how they can get the most of out their technology.

As a result of the increasing number of chemical compounds and molecular targets for HTS, there has been a trend toward the miniaturisation of assays to enhance assay throughput and screen times.4 The first major development was the 384-well plate, with a standard volume of around 50 μl, most assays can be easily adapted to this format. Cementing it as the format of choice for compound storage and HTS assays among most pharma and biotech companies.5 However, some have pushed miniaturisation further and have started to adapt whole processes toward 1536-well plates, presenting further savings on precious samples and costly reagents.6 Further still, some progress has been made in increasing plate density to 3456-well with assay volumes right down to 1 μl. It is believed that this increased miniaturisation is unlikely to receive widespread adoption without major technological developments, particularly in the automated low volume dispensing technology that supports the assay.3

Current trends point toward the 384-well and 1536-well plates as industry standards. With increasing interest in the 384-well low volume plate that uses conical wells to run biological assays at the relatively low volume of 10-20 μl.  Other efforts to enable screening outside of microplates by utilising developments in microfluidics at volumes down to 0.1 μl are ongoing. These ultra-low volumes do however present a new set of challenges so the applicability and benefits of these new technologies in routine screening remain to be shown.7

A promising microplate-free approach for HTS is acoustic liquid handling technology. The Echo® systems from LabCyte are capable of accurately dispensing volumes down to 2.5 nL, saving precious compounds and reagents whilst also eliminating pipette tip associated variances that affect assay success.8 A partnership between LabCyte and AstraZeneca has already begun to show the value of this technology. Speaking to BusinessWire Clive Green, Director of Sample Management, AstraZenca said “Acoustic dispensing will revolutionize compound management by reducing compound volumes by 10-fold. Acoustic tubes represent another significant step forward by enabling a workflow that generates assay-ready plates for high-throughput screening using only acoustic transfers. This should provide an unparalleled level of quality in screening data produced from our biological assays.”

Away from the physical technologies that enable HTS, significant gains in optimising lead discovery efforts can be made from performance management and development. First proposed in 2009, the magic triangle of HTS offers fundamental insight into the way HTS efforts can be improved, the three key factors being time, costs and quality of the process.3 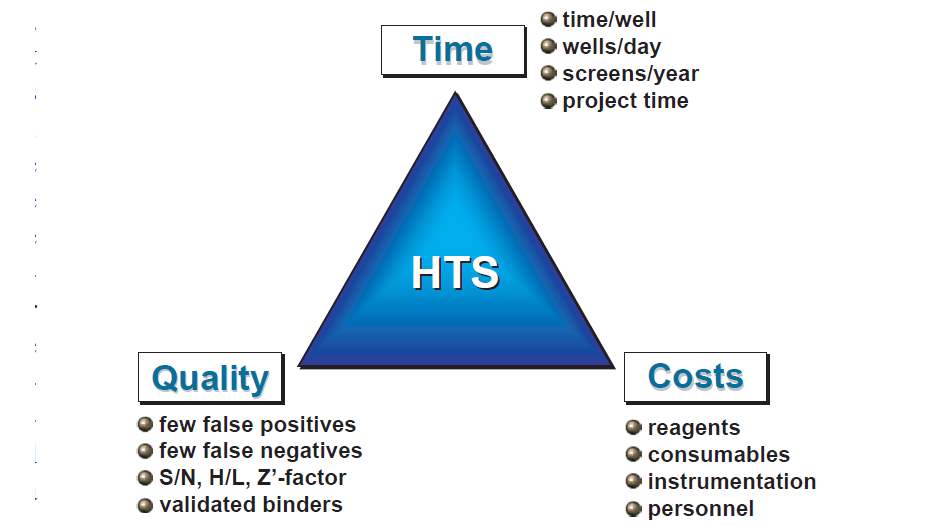 Figure 1. "The magic triangle of HTS” shows the key success factors for modern lead discovery via HTS—namely, time, costs, and quality. All 3 factors are closely linked, and every change on either one of these factors influences the setup of all the other factors as well. Credit: Lorenz M. Mayr and Peter Fuerst, The Future of High-Throughput Screening. DOI: https://doi.org/10.1177/1087057108319644.

By its very nature, HTS involves many samples so, the time taken to measure an individual well is an important factor for increasing efficiency. This however, can be a narrow view and the HTS project should be considered as a whole. By looking at the time taken from the initial nomination of a target through to the delivery of the final results, scientists are presented with a wider range of opportunities to optimise their process. In fact, the time taken to actually screen against a target at most modern HTS facilities represents only a minor part of the project. Most time consuming are the steps taken to develop and adapt an assay, analyse and interpret the data, validate a hit and then carry out follow up screens.

By looking at an HTS project as a whole it is also easier to see which factors have the greatest impact on the cost of a screening campaign. High capital technological investments such as automated plate handling and readout systems must be considered but, it is important to recognise that reagents and consumables often represent similarly high costs across a project. Costs for reagents, in particular, can be inhibiting as they are sometimes highly sensitive, expensive or hard to produce. As mentioned before, miniaturisation can help here but, studies show that a reduction in volume for biological assays does not correlate directly with a reduction in requirements for sample material and reagents. In fact, in some cases 384-well low volume and 1536-well plates can require proportionally more resources to deliver sufficient signal intensity and data quality. 3

Process quality must also be considered, particularly in programs with large data sets because proper data analysis requires results with high statistical quality. The quality of data can be measured using several tools such as the number of false negatives and positives, signal/noise and Z’ factor amongst others.9 However, the sensitivity of an assay for reference compounds should also be considered when optimising for quality.  Essentially assays should be developed to maximise statistical quality whilst also attempting to achieve sensitive detection of weak inhibitors to maximize the potential of discovery of regulators of target activity.10 By considering time, cost and the process it is possible to evaluate every lead finding effort and technology to optimise screening efforts.

In its relatively short lifetime, HTS has contributed immensely to early-stage drug discovery and through rapid investment has already evolved to become a staple in lead discovery. Concentrated efforts in automation, miniaturization and the necessary readout technologies have enabled the growth of HTS, allowing us to screen compounds far more rapidly and effectively than predicted even a few years ago. Now, the focus must be levelled on expanding our repertoire of readout technologies to enable the screening of novel drug targets such as ion channels, transporters and protein-protein interactions.3

As scientists continue to move through the so-called “third generation of HTS” we will likely see more flexibility in the processes used for novel lead discovery and a stronger focus on selecting the appropriate strategy for the proposed target.3 Considering the future, these trends are likely to continue to drive the successful application of HTS, expanding the potential targets that can be addressed whilst reducing the time and money taken to bring drugs to market and all the time increasing our reliance on automated science.

8. Assay Assembly for Miniaturized Quantitative PCR in a 384-well Format using the Echo® Liquid Handler. Available at http://www.labcyte.com/media/pdf/APP-Labcyte-G102-Echo-555-384w-qPCR.pdf (Accessed May 19 2017).