Organisms must constantly protect themselves from harm caused by invaders such as bacterial and viral pathogens. The immune system delivers this protection via numerous pathways, but this can broadly be broken down into two arms, innate immunity and adaptive immunity. In this article, we explore both aspects of the immune response, how they come about, the key cells and molecules involved and their role in protecting us.

Immunity is defined as an organism’s ability to protect itself from anything that it does not recognize as self, such as a pathogen or toxin.

How does the immune system tell self from non-self?

What is innate immunity?

Innate immunity, also known as genetic or natural immunity, is immunity that an organism is born with. This type of immunity is written in one’s genes, offering lifelong protection. It is considered the more evolutionarily primitive immune system and consequently, as well as being found in vertebrates, is also found in various shapes and forms in plants, fungi and insects. The innate immune response is fast acting and non-specific, meaning it does not respond differently based on the specific invader that it detects.

The path taken will depend upon whether the threat is intracellular, such as a virus, or extracellular, such as a bacterium. Invaders may be recognized by the innate immune system if the host MHC-class I molecules that indicate it as self are absent, as is the case with natural killer cell surveillance. Alternatively, molecules may be recognized that are common to many pathogens but are absent in the host. These are called pathogen-associated molecular patterns or PAMPs, and their recognition promotes their destruction through phagocytosis or cytotoxic killing.

For intracellular threats, pattern recognition receptors (PRRs) detect non-self components, such as viral RNA, DNA or intermediate products. This leads to the production of pro-inflammatory cytokines, induces apoptosis of infected cells or flags them to be targeted by other innate immune cells for destruction.

Phagocytic cells, such as dendritic cells, are able to chop up the foreign material they engulf and present it on their surfaces which is an important step in activating the adaptive immune response. This has earned them the name, antigen presenting cells (APCs).

Collectively, the main roles of the innate immune system are to: 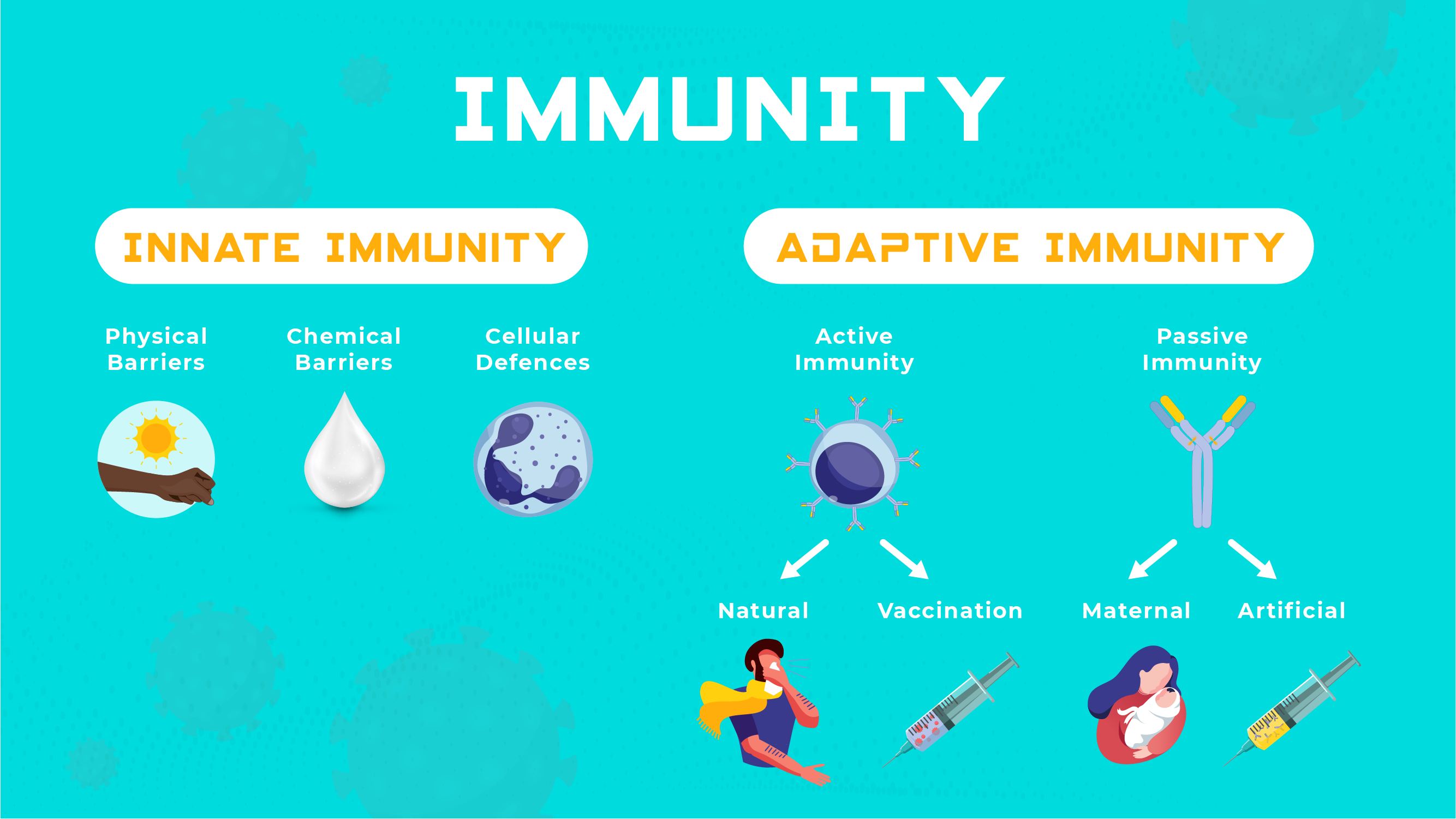 A comparison of innate and adaptive immunity

What is adaptive immunity?

Organisms are not born with adaptive immunity and it is not “hard wired” in their genes like innate immunity. It is acquired during their lifetime as a result of exposure to specific antigens, be that through natural means such as infection or by vaccination. Consequently, it is also known as acquired immunity. An adaptive immune response is much slower than an innate response, taking days or even weeks to develop on first encounter (the primary immune response), but is specific to the antigen(s) present and can retain a long term “memory” to enable a faster response if it is encountered again in the future. Adaptive immunity does it necessarily last throughout an organism’s entire lifespan, especially if it is not regularly re-exposed, although it can.

If the innate immune system alone is insufficient to control a foreign threat, the adaptive immune system is activated via signaling molecules and/or the presentation of antigens by antigen presenting cells. Professional antigen presenting cells, such as dendritic cells, have major histocompatibility complex class II (MHC class II) molecules on their surface that are involved in the presentation of foreign peptides, helping to ensure appropriate immune activation. The adaptive response consists of the cell-mediated immune response, which is executed by T cells, and the humoral immune response, which is controlled by activated B cells and antibodies. Clonal expansion of T and B cells that specifically recognize epitopes of the antigens present occurs.

T cells have diverse functions and may cause direct killing of infected cells or help to stimulate B cells towards antibody production. Once stimulated, naïve B cells differentiate into memory cells and plasma cells. Plasma cells produce and secrete large quantities of antigen-specific antibodies for the remainder of their lifecycle to help neutralize and destroy their target. Memory cells can survive for decades, reactivating in response to the presence of their target antigen to produce antibodies. Consequently, the response to repeated exposures may be faster and more robust.

The above description of adaptive immunity describes active immunity, which is the result of first-hand exposure, infection or vaccination. Passive immunity.is also a type of adaptive immunity but instead of creating its own antibodies, the organism receives external antibodies that help to protect them. This may be as a result of transfer from mother to baby through the placenta or via breast milk, or by injection to defend against a specific disease. 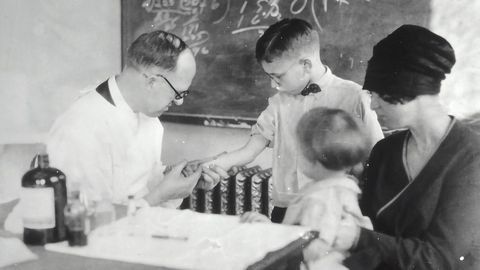 END_OF_DOCUMENT_TOKEN_TO_BE_REPLACED

The following table summarizes the primary differences between innate and adaptive immunity.

Which cells are involved in innate and adaptive immunity?

There are many cell types with their own specific roles involved in immunity as summarized in the figure below. In the innate immune response, these include macrophages, neutrophils, eosinophils, basophils, mast cells and dendritic cells that are derived from myeloid progenitors. Natural killer cells also form part of the innate immune system but, unlike the other cells of the innate immune system, are derived from lymphoid stem cells. Cells involved in the adaptive immune response include B cells (or B lymphocytes) that differentiate into memory cells and plasma cells and a variety of T cells (or T lymphocytes), including T helper cells and cytotoxic T cells (also called cytotoxic T lymphocytes, CTLs and CD8+ T cells), that are derived from lymphoid stem cells. Natural killer T cells and gamma-delta T cells are part of both the innate and adaptive immune response. 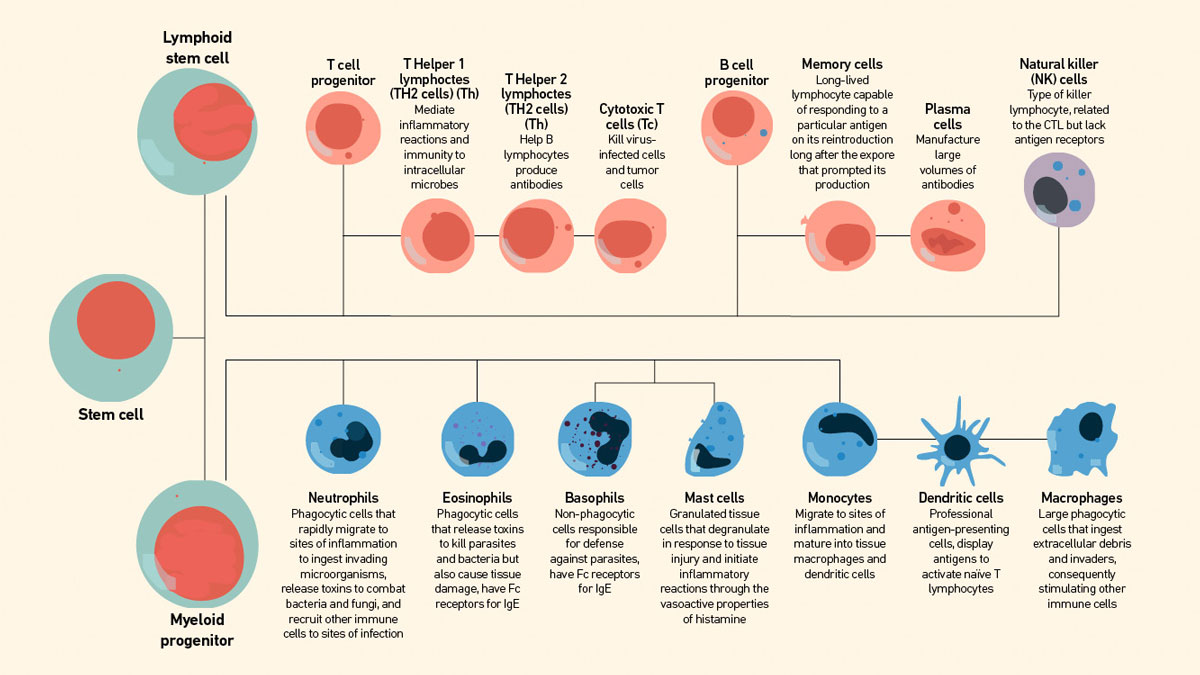 Cells of the innate and adaptive immune system, their origins and roles in the immune response.

The role of immunological memory

Immunological memory is defined as “the ability of the immune system to respond more rapidly and effectively to a pathogen that has been encountered previously” but in reality, extends to antigens of any source, not just pathogens. As mentioned, we have memory B cells to thank for this capacity.

It is thanks to immunological memory that we can vaccinate against infectious diseases and avoid going through natural infection. Once the body creates the antibodies necessary to quell a pathogen, it is able to do so more quickly if it encounters the pathogen again in the future. This can happen irrespective of whether the memory cells are formed through infection or from encountering weakened, dead or antigen subunits through vaccination.

Complete the form below to unlock access to this Audio Article: "Innate vs Adaptive Immunity"