Living in the (Bio)material World: A Night at Biodesign Here Now

Ruairi is a senior science writer at Technology Networks. He holds a Master's degree in clinical neurosciences from the University of Cambridge and has written for Technology Networks since 2018.
Learn about our editorial policies
Paula Nerlich's CIRCULAR HOME project aims to empower communities to shape their own homes through interior pieces made with vegan biodegradable bioplastics and foams derived from household and industrial waste. Credit: Paula Nerlich

Complete the form below and we will email you a PDF version of "Living in the (Bio)material World: A Night at Biodesign Here Now"

A collection of shipping containers in Shepherd’s Bush, London, is not where you might expect to find a biological laboratory. But that is exactly where lab start-up Open Cell have set up home.

Open Cell is spread across 70 containers, where designers and researchers cohabit. It’s a unique space. Between September 19-21, Open Cell will showcase an exciting array of projects that link biology and design during their Biodesign Here Now (BHN) event. Part of London Design Week, BHN features architects, artists, textile designers, and many more creatives who have found ways to bring together biology and design in their work. An opening event on September 19 was an opportunity for the designers to showcase their projects. The buzzword of London Design Week this year is biomaterial and this was readily embraced across the show.

Why bring biology and design together in the first place? Open Cell founder Helene Steiner says there are two reasons, “One is for the general public; [science] is so far away from them - and you have to make it tangible. And I think how science gets represented at the moment, just doesn't reach the general public. And not only the general public, but also industries such as fashion or product design. So it's a great opportunity to give people an entry level to the whole thing and make it graspable, give it a shape. And, and then also, I think the other side is that the companies that we have here, half of them are consumer focused, they actually can present it and see what the reaction is. Do people want it? The thing is, if it's a product, it's not about the science or the tech anymore, they have to make it appealing. And often, it doesn't matter if it's perfect. Sometimes there are weird reasons why people like it.” 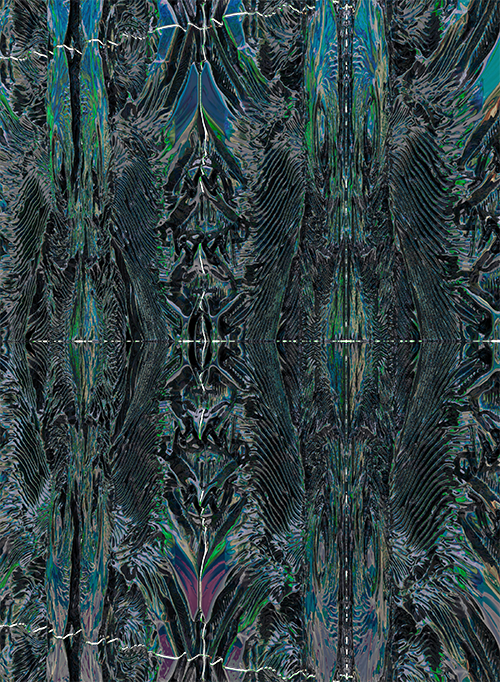 The projects at BHN all represent the integration of biology and design to some extent – but no two projects are alike in the relative contribution of the two areas. Rachael Colley, a Sheffield-based jewelry designer, works with biological waste products from food and manufacturing, like vegetable peels and leather scraps. Colley’s brooches created from these materials are certainly unconventional – but the natural imperfections of the pieces have proved an excellent tool to start a wider discussion, says Colley, “My work’s still at an early stage – I work with a lot of young people, and young women, and I think the work can help raise questions about diet, as the materials being used are those that would normally be castoffs and waste. Being able to repurpose those as a design element that you wear on your body can give you a new perspective. It’s walking a fine line – I like that it makes you feel a bit uncomfortable.”

Colley’s work is certainly biologically inspired, but my eye is also caught by another container, where a poster is filled with jargon more familiar to academic conferences. This is the Biological Laboratory of Architecture and Sensitive Technologies (BLAST) studio, created by three young French architects who are using molds and 3D printed shapes seeded with mycelium colonies to create innovative objects and building designs. Martin Detoeuf, BLAST co-founder, explains the lengthy process behind creating one of their products, which involves creating a fine powder which can be used as feed for the mycelium, which is grown onto surfaces and then air-dried. When he shows me a humid chamber where a bright orange mushroom is feeding off the side of a vase (they are edible too!), I am amazed to discover that none of the team have any training in biology. “It’s amazing,” says Detoeuf. “We previously did all this work in our kitchen in France, and it wasn’t easy. It was hard to find people trusting in our project. I think Open Cell is unique – it’s one of the only places where companies of our size in this area can exist. We are still in the research phase, but we want to grow as a company.” The team hope to hire fungal biologists who can help them use a wider range of colony types for different designs and applications. 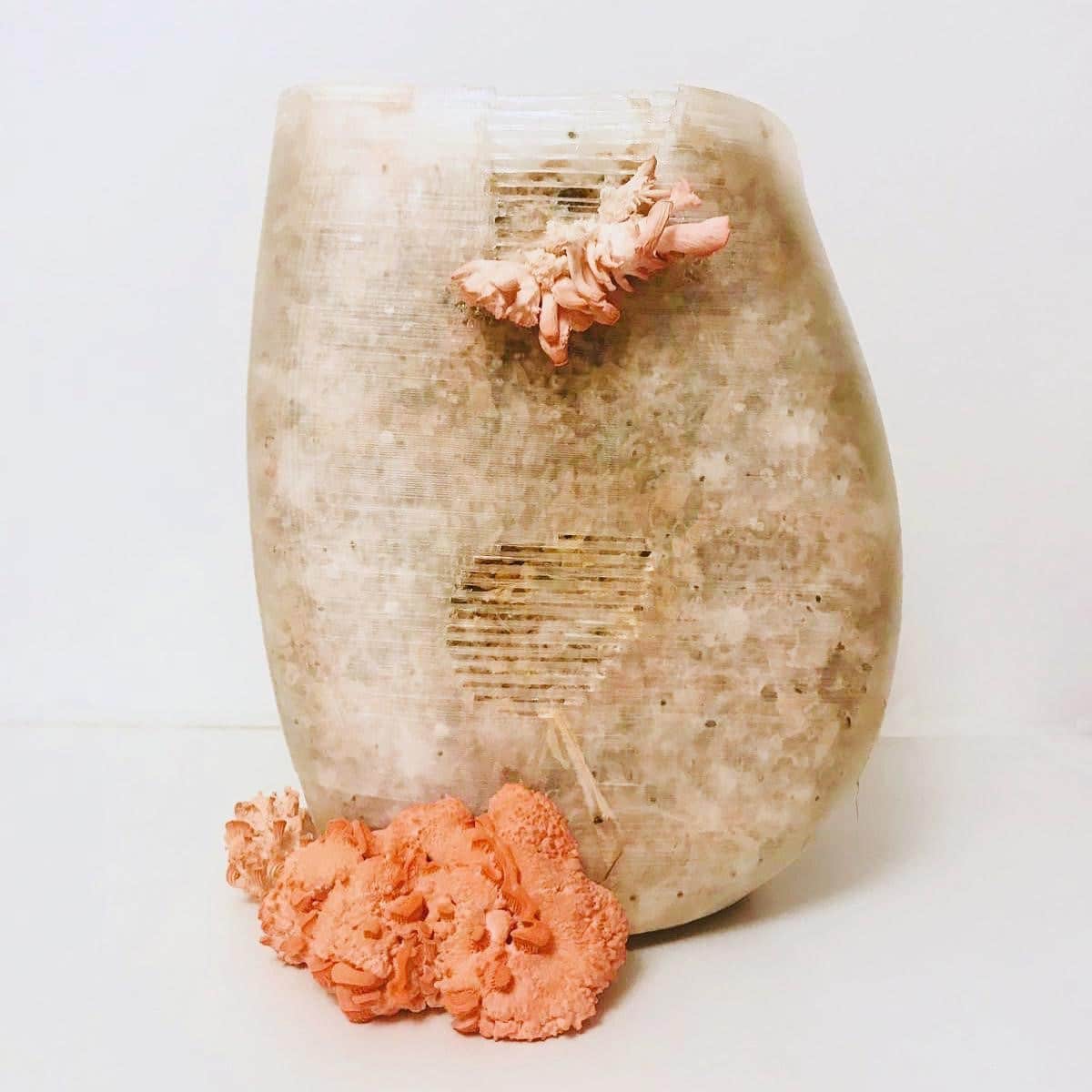 The spectrum of biodesign

The festival comes at an exciting time for biodesigners. Biological technology has historically been eye wateringly expensive and complicated even for well-funded research labs. But the falling price of genomic technologies, which has seen the cost of sequencing a human genome fall from $3 billion at the turn of the century to under $1000, is just one example of how scientific tools are becoming more accessible to the public, ushering in a wave of “outsider science” from beyond the ivory towers of established institutions. Suzanne Lee, a veteran of the industry and Founder of biodesign consultancy Biofabricate, sums up the field in a speech opening the festival. “In this new world where design meets science meets consumer brand, there is a spectrum. At one end we have researchers, at the other end, the brands, and in the middle, we now have biotech.” All the different displays at BHN are somewhere along that spectrum – which is why Open Cell is the perfect location to host the event. “We have a mix of startups and designers – I’d say we have 50% pure-science, 25% science-design, and 25% pure design,” says Steiner. “When we started out it was mostly design, because for scientists it was unacceptable – “Working in a shipping container? I’m used to a research lab, who deals with my trash here?” – but as soon as we got the first batch in and because we were so cheap, it became more approved, and as soon as we got the first scientists in, we started to get emails every day.”

To see the Design Week embracing biological influences is heartening – Lee describes how, with a bit of patience, we could make materials that are not only sustainable, but also stronger and lighter – and any projects that help scientists reach beyond industry and academic can only lead to some exciting ideas. Do the scientists at Open Cell engage with the designers next door? Of course, says Steiner, “Because they're human beings, right? If you want to have a cigarette and a coffee, you're hanging outside in the sun. And then you talk about your day with other people, so then it's like, whew, that's actually interesting, could be useful for me. Can you help me on that? So, it's very natural.”

Complete the form below to unlock access to this Audio Article: "Living in the (Bio)material World: A Night at Biodesign Here Now"